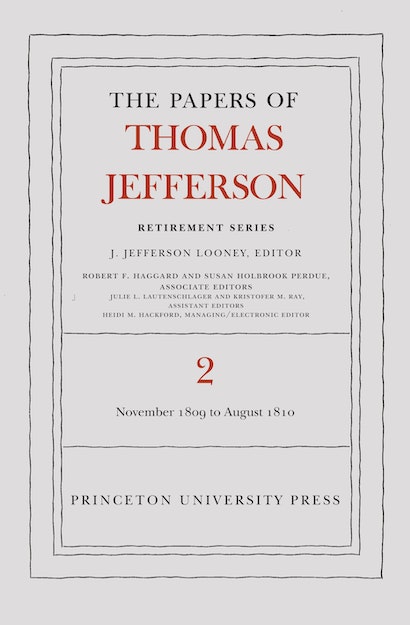 Buy This
The definitive edition of Thomas Jefferson’s papers from the end of his presidency until his death continues with Volume Two, which covers the period from 16 November 1809 to 11 August 1810. Both incoming and outgoing letters are included, totaling 518 documents printed in full. General themes include Jefferson’s financial troubles, which eventually led him to loan himself a large sum of money he was managing for Tadeusz Kosciuszko; his preparations to face a lawsuit stemming from his decision as president to remove Edward Livingston from a valuable property in New Orleans; other legal complications involving his landholdings and the settlement of estates he had inherited long before; his plans to breed merino sheep and share them gratis with his fellow Virginians; and his ongoing interest in the Republican party’s success. Highlights include a long list of books on agriculture that Jefferson probably compiled to guide the Library of Congress in its purchases; descriptions of inventions by Robert Fulton and more obscure figures such as the New Orleans engineer Godefroi Du Jareau; Jefferson’s draft letter criticizing the Quakers as unpatriotic, much of which he later deleted; the letter in which he ordered a set of silver tumblers that have become known as the Jefferson Cups; and an important treatise on taxation by the distinguished French political economist Pierre Samuel Du Pont de Nemours, published here for the first time.
J. Jefferson Looney is editor of The Papers of Thomas Jefferson: Retirement Series, which is sponsored by the Thomas Jefferson Foundation, Charlottesville, Virginia.