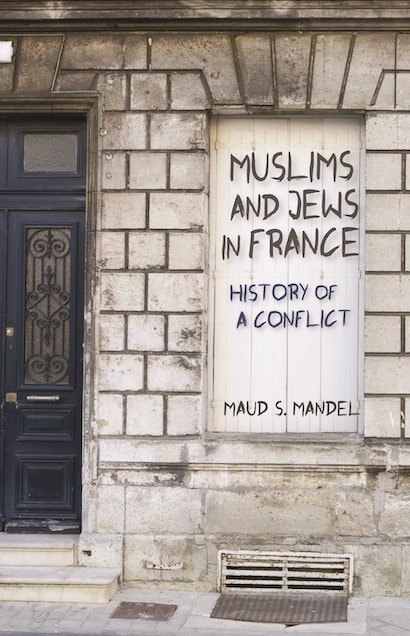 This book traces the global, national, and local origins of the conflict between Muslims and Jews in France, challenging the belief that rising anti-Semitism in France is rooted solely in the unfolding crisis in Israel and Palestine. Maud Mandel shows how the conflict in fact emerged from processes internal to French society itself even as it was shaped by affairs elsewhere, particularly in North Africa during the era of decolonization.


Mandel examines moments in which conflicts between Muslims and Jews became a matter of concern to French police, the media, and an array of self-appointed spokesmen from both communities: Israel’s War of Independence in 1948, France’s decolonization of North Africa, the 1967 Arab-Israeli War, the 1968 student riots, and François Mitterrand’s experiments with multiculturalism in the 1980s. She takes an in-depth, on-the-ground look at interethnic relations in Marseille, which is home to the country’s largest Muslim and Jewish populations outside of Paris. She reveals how Muslims and Jews in France have related to each other in diverse ways throughout this history — as former residents of French North Africa, as immigrants competing for limited resources, as employers and employees, as victims of racist aggression, as religious minorities in a secularizing state, and as French citizens.


In Muslims and Jews in France, Mandel traces the way these multiple, complex interactions have been overshadowed and obscured by a reductionist narrative of Muslim-Jewish polarization.

Maud Mandel is professor of history and Judaic studies and dean of the College at Brown University. She is the author of In the Aftermath of Genocide: Armenians and Jews in Twentieth-Century France.

"Mandel offers new perspectives on the factors at play in deteriorating Jewish-Muslim interactions. She challenges theories that concentrate on the Middle East and argues that they obscure dynamics in France that have more directly influenced the situation. This concise account, which highlights instances of interethnic cooperation, is chronologically organized and underscores how the legacy of French colonialism created separate paths for the thousands of North African Muslims and Jews that settled in France because of decolonization."—Choice

"I found this an enjoyable and illuminating read. . . . [I]t is a worthwhile book which illuminates one of the pressing problems of our time."—Ruth Barbour, Open History

"Muslims and Jews in France is a remarkably concise and clear analysis of the complex relationship and mutual constitution of the two communities. Mandel has a knack for making the paradoxes of her subjects accessible, making this book necessary reading for anyone interested in contemporary French history and politics, Jewish history and Muslim-Jewish relations: instead of just lamenting the news, it allows us to think through it critically."—Arthur Asseraf, French History

"Muslims and Jews in France is a most in-depth, sophisticated piece of work that warrants a lot of attention and needs to be read; particularly in light of an on-going conflict where there appears to be no end in sight."—David Marx, David Marx: Book Reviews

"For those who prefer thoughtful historical analysis to slogans, Mandel's book is one place to turn. What one finds is that post-war Jewish life in Europe in general, and France in particular, belies the tidy narrative still being constructed."—Simon J. Rabinovitchm, Haaretz

"Muslims and Jews in France: A History of Conflict, by Maud Mandel, offers a valuable historical portrait of relations between the two most significant religious minorities in France, and Europe, Jews and Muslims."—Shana Cohen, Journal of Muslims in Europe

"In this balanced and sensitive study, Mandel offers a detailed assessment of the development of Muslim-Jewish relations from the immediate post-war years to the late 1980s. . . . Mandel's thoughtful analysis raises important questions for future research. Overall, this is a valuable consideration of a complex topic, and one that will be of benefit both to historians of decolonisation and left-wing mobilisation, and also to those more broadly interested in the controversies which continue to fire the French political imagination."—J. Wardhaugh, English Historical Review

"Based on exhaustive research, Muslims and Jews in France condenses half a century of complex inter-ethnic relations in a little more than hundred and fifty pages of text (with 80 pages of notes!) and succeeds in giving a clear picture of the interaction between these two minority communities in France. Recommended to all academic libraries."—Roger S. Kohn, Association of Jewish Libraries Reviews

"A well-studied, nuanced and compelling book . . . will soon become one of the seminal works in the studies of Jewish-Muslim relations in France."—Erdem Dikici, Insight Turkey

"Muslims and Jews in France is an extremely important book which will open new paths in scholarship on the Middle Eastern conflict and Jewish-Muslim relations in France."—Laura Hobson Faure, History

"Mandel deftly analyzes the polarization of positions concerning Muslims and Jews in France while giving a dramatic example of how social reality and language may themselves conflict. As she points out, social violence between the two groups has been rare, while the increasing polarization of discourse has proceeded apace. Sure to raise some hackles, her book is a provocative must-read."—Nancy L. Green, École des Hautes Études en Sciences Sociales, Paris

"Mandel reveals how the conventional opposition between Muslim and Jew has obscured a more complex pattern of interethnic relations in France. At the same time, she demonstrates that the language of ethnic and religious discord has itself had a powerful impact on Muslims and Jews alike. In a study that combines sophistication with clarity, Mandel provides a compelling historical account of an issue that continues to shape the present."—David Feldman, Birkbeck, University of London

"Using a wide variety of sources and focusing on local events in Marseille, Mandel deftly shows how a specifically French history interacts with international events to produce conflicts between Jews and Muslims. She provides new and important insights into the nature of the conflict, the political groups that produced it, and the ways in which perceptions of each group have been shaped."—Joan Wallach Scott, author of The Politics of the Veil