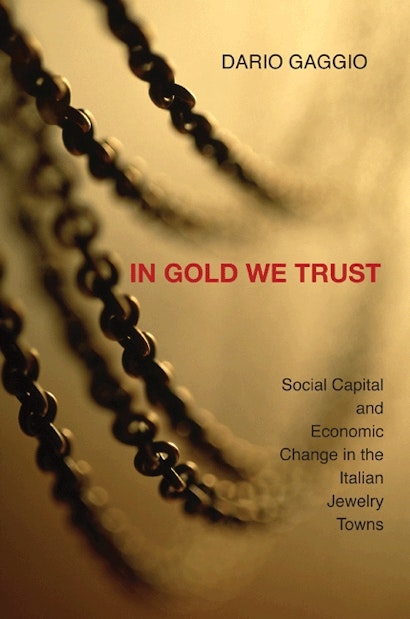 In Gold We Trust is a historical and sociological account of how, by the late 1960s, three small Italian towns had come to lead the world in the production of gold jewelry — even though they had virtually no jewelry industry less than a century before, and even though Italy had western Europe’s most restrictive gold laws. It is a distinctive but paradigmatic story of how northern Italy performed its post-World War II economic miracle by creating localized but globally connected informal economies, in which smuggling, tax evasion, and the violation of labor standards coexisted with ongoing deliberation over institutional change and the benefits of political participation.


The Italian gold jewelry industry thrived, Dario Gaggio argues, because the citizens of these towns — Valenza Po in Piedmont, Vicenza in the Veneto, and Arezzo in Tuscany — uneasily mixed familial affection, political loyalties, and the instrumental calculation of the market, blurring the distinction between private interests and public good. But through a comparison with the jewelry district of Providence, Rhode Island, Gaggio also shows that these Italian towns weren’t unique in the ways they navigated the challenges posed by the embeddedness of economic action in the fabric of social life.


By drawing from a variety of disciplinary backgrounds, ranging from economic sociology to political theory, Gaggio recasts the meanings of trust, embeddedness, and social capital, and challenges simple dichotomies between northern and southern Italy.

Dario Gaggio is Assistant Professor of History at the University of Michigan.

"I hope this book will be widely read, not only by people interested in the Italian industrial districts but by all those who want to know more about the social dimension of markets."—Vera Zamagni, American Historical Review

"Dario Gaggio's book, In Gold We Trust, is the twentieth-century story of the important Italian industrial districts active in the manufacture of jewelry, and offers a significant and precious contribution to our understanding of the phenomenon."—Franco Amatori, Enterprise and Society

"This is an interesting and well-written book, articulated over seven chapters and alternating between theory and historical narrative. Gaggio's use of oral history is an effective counterbalance to the drier archival material. Together, they provide a vivid picture of the multifaceted life of artisans, workers, and business owners in twentieth-century provincial Italy."—Francesca Carnevali, Business History Review

"This is a well-written, engaging book dealing with an important and widely discussed topic about which there is still little detailed work available in English: the historical evolution of Italian industrial districts or local and specialized networks of small- and medium-sized firms. Gaggio does a particularly fine job of showing how the variegated history of the Italian jewelry districts challenges Robert Putnam's celebrated account of social capital as the inherited foundation for local cooperation in the regions of northern Italy."—Jonathan Zeitlin, University of Wisconsin, Madison

"This book is quite unusual and innovative in straddling different disciplines and approaches and making use of a variety of primary sources, including some novel archival ones. As such, it differs substantially from most other books on industrialization and industrial districts. The arguments are well made and well supported from the case studies and the work will be useful to economists, sociologists, social and economic historians, and social anthropologists."—Anna Cento-Bull, University of Bath