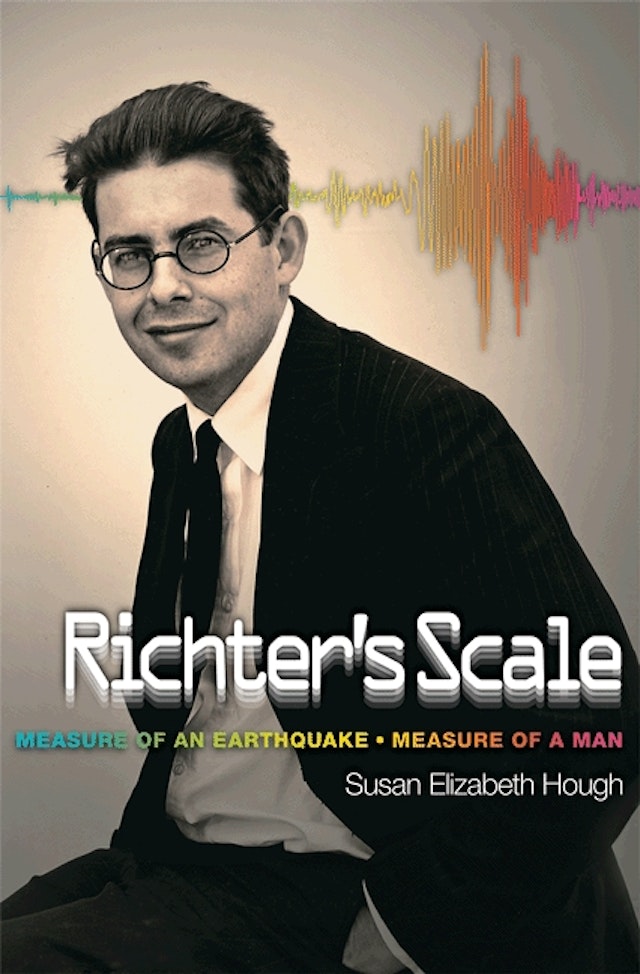 By developing the scale that bears his name, Charles Richter not only invented the concept of magnitude as a measure of earthquake size, he turned himself into nothing less than a household word. He remains the only seismologist whose name anyone outside of narrow scientific circles would likely recognize. Yet few understand the Richter scale itself, and even fewer have ever understood the man.

Drawing on the wealth of papers Richter left behind, as well as dozens of interviews with his family and colleagues, Susan Hough takes the reader deep into Richter’s complex life story, setting it in the context of his family and interpersonal attachments, his academic career, and the history of seismology.

Among his colleagues Richter was known as intensely private, passionately interested in earthquakes, and iconoclastic. He was an avid nudist, seismologists tell each other with a grin; he dabbled in poetry. He was a publicity hound, some suggest, and more famous than he deserved to be. But even his closest associates were unaware that he struggled to reconcile an intense and abiding need for artistic expression with his scientific interests, or that his apparently strained relationship with his wife was more unconventional but also stronger than they knew. Moreover, they never realized that his well-known foibles might even have been the consequence of a profound neurological disorder.

In this biography, Susan Hough artfully interweaves the stories of Richter’s life with the history of earthquake exploration and seismology. In doing so, she illuminates the world of earth science for the lay reader, much as Sylvia Nasar brought the world of mathematics alive in A Beautiful Mind.

Susan Elizabeth Hough is a seismologist with the Southern California Earthquake Center and a fellow of the American Geophysical Union. Her books include Predicting the Unpredictable and Earthshaking Science (both Princeton).

"The true value of Richter's Scale resides in its unspoken commemoration of a nearly extinct mode of scientific endeavor."—Claudio Vita-Finzi, Times Literary Supplement

"One thing this book, written by one professional scientist about another, communicates very clearly, is what it is actually like to be a scientist—a welcome contribution."—Roger M. W. Musson, Times Higher Education Supplement

"[This book] reveals an unfamiliar side of the scientist famous for developing the first magnitude scale for earthquakes in 1935. . . . Most of [Richter's] colleagues remained unaware of the scope of his thoughts and interests. Richter's Scale will change this. It reveals Richter to be an individual with more than his share of flaws, but also as an iconoclastic scientist worthy of his fame and of our admiration."—Gregory C. Beroza, Nature

"Hough draws on a wealth of documents left behind by Richter . . . to chronicle his rise to fame and explain his place in the history of seismology. . . . The author describes Richter's tumultuous upbringing, his penchant for nudism, and his prolific writing of poems—many included in the book."—Science News

"Written by a seismologist about the most famous seismologist, this biography of Charles Richter (1900-85) is the first researched from Richter's papers. . . . Hough's inspections of Richter's psyche may expand her readership beyond that interested in earthquakes. . . . Richter, however difficult to like in life—he had few friends, according to Hough—proves to have had the turbulent inner life and struggles with the external world of which compelling biographies are made."—Gilbert Taylor, Booklist

"This is very much a behind-the-headlines portrait of the private man. . . . The portrait that emerges is that of a scientist who was initially far more interested in astronomy and stargazing than seismology; who possessed powerful poetic longings, and, above all, abiding decency."—Steven Carroll, The Age

"This thoughtful, well-researched book explores a central question: why Richter—an admittedly quirky, plainspoken scientist—became so much better known than some of his more accomplished colleagues. . . . Richter's ability to communicate his findings with a general audience through the press, Hough demonstrates, gave him the kind of public profile that cemented his position in the popular lexicon."—Juliet Eilperin, Washington Post Book World

"By developing the scale that bears his name, Charles Richter not only invented the concept of magnitude as a measure of earthquake size, he also turned his name into a household word. This behind-the-scenes look at Richter, the man, is an artful interweaving of the stories of Richter's life with the history of earthquakes exploration and seismology."—Natural Hazards Observer

"Richter's Scale will last as long as this earth lasts and so will this story by Susan Hough Her exemplary work the like of which we do not see often, both in terms of content and humane and conscious approach, is of great importance to our present times. While it should have been written earlier, it could not have been written better. One almost falls in love with Susan Hough for this remarkably successful attempt to bring Richter back to life and make him stand before us. Many thanks, Susan Hough! We shall remember you for this wonderer gift to the scientific-minded and to most many others less so minded."—Current Engineering Practice

"Susan Hough has done her job extraordinarily well, turning a tangled-up story of a man hardly understood by others into a very fascinating biography."—Pawel Wiejacz, Pure and Applied Geophysics

"If ever there was a subject crying out for a good biography it is Charles Richter, whose name we hear all too often on the news, a tocsin of catastrophe. If ever there was the ideal person to write his story it is Susan Hough, the seismologist who has so successfully made her mission the intelligent popularization of her calling. The combination of subject and writer is peerless-this is a quite wonderful story, impeccably told. If ever there was to be a Richter scale for biography, this surely merits a 9.5, at the very least."—Simon Winchester, author of A Crack in the Edge of the World: America and the Great California Earthquake of 1906

"Sue Hough brings Charlie Richter to life and, with him, the founders of seismology in southern California. More than simply the inventor of the magnitude scale, Richter was a brilliant, if troubled, scientist and a poet who might have suffered from Asperger's syndrome. Hough shows how this 'accidental seismologist' (his Ph.D. was in theoretical physics) influenced the evolving field of earthquake science and the public perception of earthquake hazard and risk in California and the world."—Robert S. Yeats, author of Living with Earthquakes in California

"The story of Charles Richter is a fascinating, albeit somewhat disquieting, one. Susan Hough has done a remarkable job of research, and her writing style makes this a very appealing read."—Clarence Allen, Professor of Geology and Geophysics, Emeritus, California Institute of Technology

"Richter's Scale is the first biography of the world's most famous seismologist. It tells a story well worth reading and full of surprises. The book provides a remarkable perspective on how the career of an important scientist can develop in a way that is quite far from a straight-line process. At the same time, it presents a compelling and rather sad story of the personal struggles of the man behind the Richter scale."—Clifford H. Thurber, University of Wisconsin, Madison

"This is an extraordinary piece of scientific biography. Although Charles Richter's name is a household word, even earth scientists know little about the man. This first biography of Richter gives a thoughtful and insightful view of the man, his science, and his crucial role in developing seismology, public awareness of earthquakes in southern California, and policies to reduce earthquake hazards through safer construction. It will be of great interest at a time when natural disaster mitigation is very much in public consciousness."—Seth Stein, Northwestern University