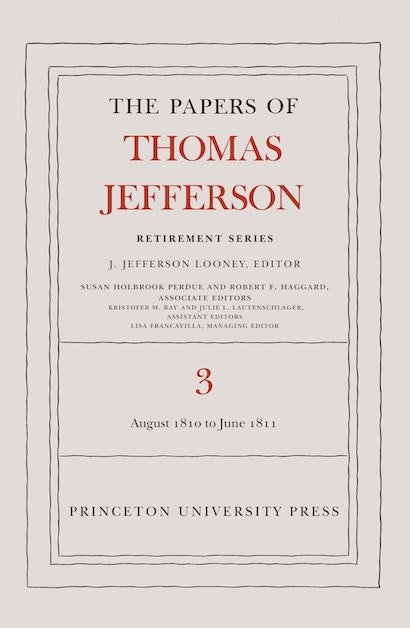 Volume Three of the definitive edition of Thomas Jefferson’s papers from the end of his presidency until his death presents 567 documents covering the period from 12 August 1810 to 17 June 1811. Jefferson is now firmly ensconced in retirement at Monticello and Poplar Forest. He is not free from legal and political concerns, however, with the controversy over the 1807 federal seizure of the Batture Sainte Marie at New Orleans looming particularly large. Jefferson prepares for his defense against Edward Livingston’s lawsuit by corresponding at length with his counsel and involved public officials, and seeking out documents and legal authorities to vindicate himself. He also seeks to end Philadelphia journalist William Duane’s growing estrangement from mainstream Republican politics, lobbies for the appointment of a committed Republican to fill a vacancy on the Supreme Court, and argues with the Rivanna Company over its proposed encroachments on his property. Other highlights are Jefferson’s draft constitution for an agricultural society, his astronomical calculations, his notes on plantings at Poplar Forest, and his estimate of the cost of shipping flour. Documents on slaves and slavery include discussions of schemes for colonizing freed slaves in Africa, information on the medical condition of some of Jefferson’s slaves, and an account of a visit to Monticello with a distinctly unflattering portrayal of the ex-president’s standing in the community and his relations with his slaves.