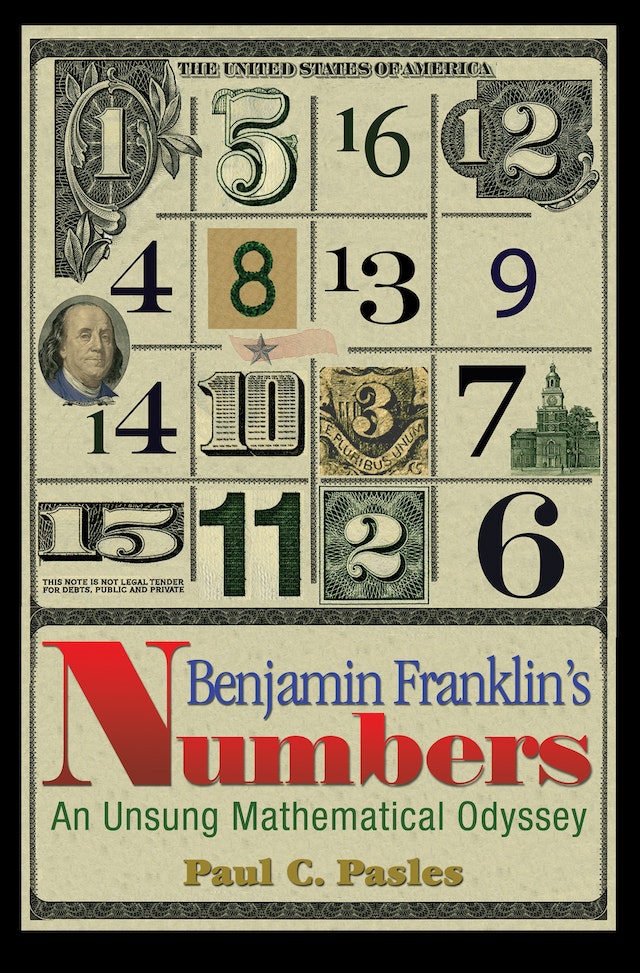 Few American lives have been as celebrated — or as closely scrutinized — as that of Benjamin Franklin. Yet until now Franklin’s biographers have downplayed his interest in mathematics, at best portraying it as the idle musings of a brilliant and ever-restless mind. In Benjamin Franklin’s Numbers, Paul Pasles reveals a side of the iconic statesman, scientist, and writer that few Americans know — his mathematical side.


In fact, Franklin indulged in many areas of mathematics, including number theory, geometry, statistics, and economics. In this generously illustrated book, Pasles gives us the first mathematical biography of Benjamin Franklin. He draws upon previously unknown sources to illustrate Franklin’s genius for numbers as never before. Magic squares and circles were a lifelong fascination of Franklin’s. Here, for the first time, Pasles gathers every one of these marvelous creations together in one place. He explains the mathematics behind them and Franklin’s hugely popular Poor Richard’s Almanac, which featured such things as population estimates and a host of mathematical digressions. Pasles even includes optional math problems that challenge readers to match wits with the bespectacled Founding Father himself. Written for a general audience, this book assumes no technical skills beyond basic arithmetic.

Benjamin Franklin’s Numbers is a delightful blend of biography, history, and popular mathematics. If you think you already know Franklin’s story, this entertaining and richly detailed book will make you think again. 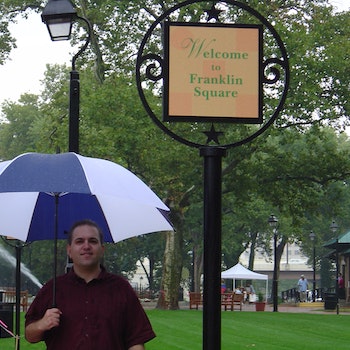 "Pasles...speculates gleefully on the oft-denied mathematical genius of Benjamin Franklin...Drawing on Franklin's letters and journals as well as modern-day reconstructions of his library, Pasles touches on Franklin's fondness for magazines of mathematical diversions; publication of arithmetic problems in Poor Richard's Almanac; startlingly accurate projections of population growth and cost-benefit arguments against slavery."—Publisher's Weekly

"In Franklin's Numbers, a book mixing intellectual history and mathematical puzzles (with solutions appended), Paul Pasles brings out a less-celebrated sphere of Franklin's intellect. He makes the case for the founding father as a mathematician."—Jared Wunsch, Nature

"Pasles delivers surprising news to Sudoku lovers: Benjamin Franklin once shared their passion...Pasles illuminates Franklin's innovative use of mathematical logic in settling moral questions and in assessing population trends. Franklin's mathematical pursuits thus emerge as a complement to his much-lauded work in politics and science. An unexpected but welcome perspective on the genial genius of Philadelphia."—Bryce Christensen, Booklist

"There is hardly a discipline on which Franklin did not stamp his mark during the 18th century. But the role that mathematics played in his life has been overlooked, argues Paul Pasles. Franklin, for instance, was fascinated with magic squares, and this book provides plenty of background to help the reader admire his interest."—New Scientist

"[This is] a book that is an easy read for the innumerate but which also provides nourishment for those more skilled in the niceties of math...Also included are some contemporary puzzles that offer the reader the chance to contest skills with Franklin himself."—James Srodes, The Washington Times

"Making frequent use of Franklin's writings as well as mathematical brainteasers of the type that Franklin enjoyed, Benjamin Franklin's Numbers is an engaging and thoroughly unique biography of a singular figure in American history."—Ray Bert, Civil Engineering

"I thoroughly enjoyed reading this book. It is written in a pleasant, conversational style and the author's enthusiasm for his subject is infectious. The text is richly embroidered with colorful details, both mathematical and historical."—Eugene Boman, Convergence: A Magazine of the Mathematical Association of America

"Pasles has succeeded in writing a book dealing with mathematics that is accessible to readers at all levels, yet thoroughly referenced and scholarly enough to satisfy researchers. His endeavor was eased by the fact that the bulk of the material concerns Franklin's magic squares and circles, which only require that the reader have the ability to add. Unexpectedly, Pasles contributes much that is new; he corrects the errors of previous authors and presents new ideas through literary sleuthing and mathematical analysis."—C. Bauer, Choice

"Pasles makes a convincing case for Franklin as the last true Renaissance man in what is an entertaining and informative book that will even appeal to readers with only limited knowledge of mathematics."—Physics World

"With seven years of diligent study, by going through a vast amount of archive material, references including primary sources and books and research papers, the author has produced a carefully documented and fascinating account to substantiate the theme he makes, namely, that Franklin 'possessed a mathematical mind.'"—Man Keung Siu, Mathematical Reviews

"[Paul C. Pasles] and the publisher should . . . be commended for producing a highly aesthetically pleasing book, with a color centerpiece showing many of Franklin's beloved magic squares in their full glory."—Eli Maor, SIAM Review

"This book will appeal to readers with an interdisciplinary interest in both history and mathematics. Teachers who enjoy showing students the many ways in which they can draw on mathematics to construct logical, real-world arguments will find useful examples for the classroom. The book also includes a variety of number puzzles that can be used to challenge students."—Michelle Cirillo, Mathematics Teacher

"I found Benjamin Franklin's Numbers a delightful book. I enjoyed studying and playing with the magic squares and patterns, and I was fascinated by the biographical tidbits about Franklin. This book is very well written, and I highly recommend it to anyone with an interest in mathematics or in Benjamin Franklin."—James V. Rauff, Mathematics and Computer Education

"Here's a book like no other, in which the life and times of Benjamin Franklin are viewed through a mathematical lens. It is at once lively and scholarly, and contains much fascinating material that will be new to mathematicians, historians, and everyone else. Did you know that the success of the American Revolution may have depended on magic squares? Paul Pasles tells why. Don't worry—the book is equation free."—Underwood Dudley, author of Numerology

"As a mathematician and Philadelphian, I was delighted to learn of how extensive were Franklin's contributions to mathematics. Ranging from topics in 'social arithmetic' such as demographics, utility theory, the twin scourges of hereditary advantage and slavery, daylight savings time, and even war and peace to puzzles, combinatorics, and magic squares, his work, as revealed in Paul Pasles's wonderful new book, reveals another facet of this polymathic statesman."—John Allen Paulos, author of Innumeracy

"Paul C. Pasles is the first excellent mathematician to appreciate and to explain clearly the many aspects of what he has called Franklin's 'miraculous numerical creations.' In the capstone, Pasles explains how and why Franklin's 'ultra-magical square' is a mathematical masterpiece."—J. A. Leo Lemay, University of Delaware

"Pasles has written a wonderful book demonstrating that Benjamin Franklin, in addition to all of his other talents, had a 'mathematical' mind. The book fills in the gaps left by Franklin's other biographers by giving us, for the first time, the details of his mathematical work, in particular his work on magic squares."—Victor J. Katz, author of A History of Mathematics

"Paul Pasles tells an entertaining and rigorous story, weaving together a familiar biography with new research on Franklin's innovative work on magic squares. Marching together, Ben Franklin and Paul Pasles may yet be able to rescue that vanishing viewpoint that finds both purpose and playfulness in public life and mathematics."—Woollcott Smith, coauthor of The Cartoon Guide to Statistics

"It takes someone with a mathematician's background to be able to analyze the true talent that Franklin exhibited in the field, and until now none of his biographers has had the requisite knowledge. Pasles's portrayal of both the human side and logical self of Benjamin Franklin is captivating."—David E. Zitarelli, Temple University