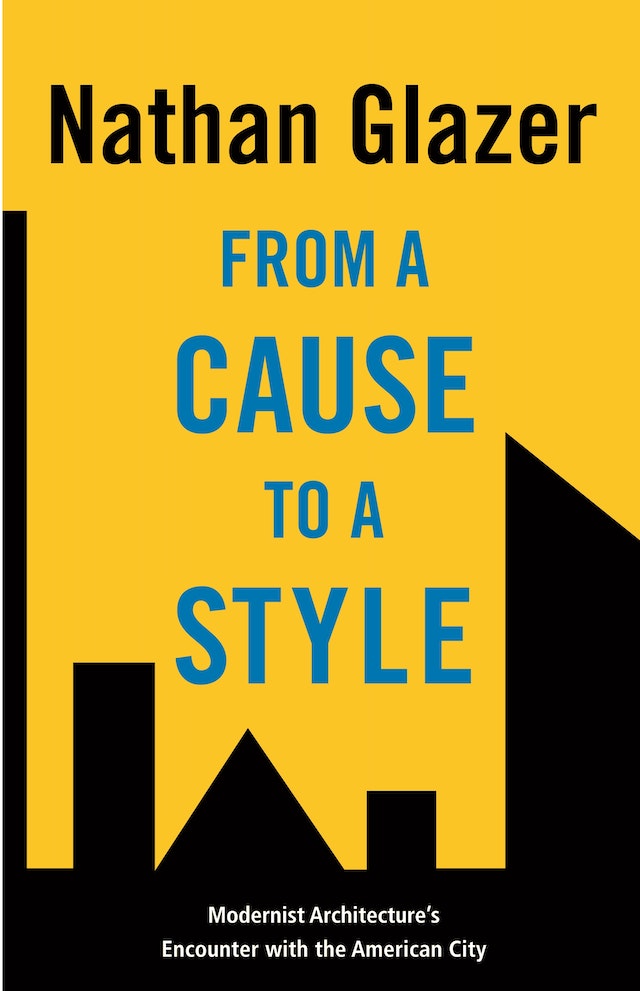 Modernism in architecture and urban design has failed the American city. This is the decisive conclusion that renowned public intellectual Nathan Glazer has drawn from two decades of writing and thinking about what this architectural movement will bequeath to future generations. In From a Cause to a Style, he proclaims his disappointment with modernism and its impact on the American city.


Writing in the tradition of legendary American architectural critics Lewis Mumford and Jane Jacobs, Glazer contends that modernism, this new urban form that signaled not just a radical revolution in style but a social ambition to enhance the conditions under which ordinary people lived, has fallen short on all counts. The articles and essays collected here — some never published before, all updated — reflect his ideas on subjects ranging from the livable city and public housing to building design, public memorials, and the uses of public space. Glazer, an undisputed giant among public intellectuals, is perhaps best known for his writings on ethnicity and social policy, where the unflinching honesty and independence of thought that he brought to bear on tough social questions has earned him respect from both the Left and the Right. Here, he challenges us to face some difficult truths about the public places that, for better or worse, define who we are as a society.

From a Cause to a Style is an exhilarating and thought-provoking book that raises important questions about modernist architecture and the larger social aims it was supposed to have addressed-and those it has abandoned.

Nathan Glazer is Professor Emeritus of Sociology and Education at Harvard University. He was Coeditor of the Public Interest. His books include Beyond the Melting Pot, We Are All Multiculturalists Now, and The Public Face of Architecture.

"The greatest pleasure of From a Cause to a Style lies simply in listening to Glazer think as he walks us about his native New York, with occasional diversions to other locals like Boston or the Washington Mall. His intelligence fairly radiates from the page, and his prose is a pleasure to read—clear, supple and frequently droll."—Kevin Baker, New York Times Book Review

"A new, wonderful collection of essays. . . . Mr. Glazer's analysis elegantly weaves aesthetics, political science, and intellectual history together. . . . [This] superb book explores an important aesthetic movement, but it is also a warning against delegating public control over construction to artistic elites. . . . Mr. Glazer has made his case well."—Edward Glaeser, New York Sun

"Glazer credits the modernist generation for their interest 'in good sanitary housing, in green space, in access to air and light, in more living space'—in creating a livable city. They often failed to see how their plans would intersect with, or crash into, reality, but at least they were engaged."—Christopher Shea, Boston Globe

"In From a Cause to a Style, sociologist Nathan Glazer laments the loss of the idealism and zeal that designers possessed in the post-war period."—John Norquist, Cities on a Hill

"Where urban architecture is concerned, seldom has there been so perceptive a watcher as Nathan Glazer. . . . A wise and humane book, From a Cause to a Style exudes the authority that comes from a lifetime's mature consideration of its subject."—Michael J. Lewis, Commentary

"From a Cause to a Style collects [Glazer's] intriguing—and accessible—essays on urban architecture and public space."—Fred Siegel, City Journal

"Nathan Glazer, the eminent American sociologist, discusses the conflict between Prince Charles and [modernist] architects in his remarkable new book, From a Cause to a Style: Modernist Architecture's Encounter with the American City."—Robert Fulford, National Post

"Nathan Glazer isn't afraid of a little controversy. In From a Cause to a Style he deftly argues that the modernist architectural movement was a civic disaster. Modernism began as a call for functional buildings and essential public spaces shorn of unnecessary ornament, but wound up as 'soulless, bureaucratic and inhuman.' Glazer challenges the next generation of architects, planners and designers to learn from history's mistakes."—TBJ Home

"Glazer...has many useful and intelligent thoughts to offer.... [H]ere is literacy of a high order, writing which by force of style alone nearly convinces."—David Dunster, Architectural Review

"Written in an appealing and clear style, this book is a most necessary reading for anyone interested in both a deep and broad understanding of modernism, and the controversial forms it takes in the city."—Julia Nevárez, Architectural Science Review

"What is good? What is true? What is beautiful? From a Cause to a Style clears at least some of the intellectual space needed for a larger reconsideration of these questions. It deserves a wide reading."—Phillip Bess, Society

"I have learned profoundly from Nathan Glazer's cultural perspectives and deep insights, engaging the extraordinary and the ordinary. From a Cause to a Style is a work I consider most relevant and significant for our time via its all-encompassing range and its richness of detail involving multiple urban, architectural, technical, and social issues-recent, current, and future."—Robert Venturi, architect and author

"This collection is a reminder that in addition to being an urban sociologist, an astute commentator on social issues, and a public intellectual, Nathan Glazer is an insightful and provocative architecture critic."—Witold Rybczynski, author of Home: A Short History of an Idea

"Nathan Glazer stands in the grand but fragile American tradition of the humanist architectural critic. He is also one of our great complexifiers. Whether he is writing about cities, streets, public spaces, or particular buildings, he notices things that seem to escape the attention of the professional—though not always of the general public. To read him is to become aware of one's own architectural experience, and to begin thinking hard about how it might be improved."—Mark Lilla, University of Chicago

"This is a remarkable collection of essays that only Nathan Glazer could write. It sums up and partly explains the inability of contemporary architecture to deal with the problems of modern urbanism and to address many practical issues of building. As Glazer points out, an architectural tradition that identified itself by its capacity to focus the issues of functionalism has ended up by almost totally ignoring them."—Robert Gutman, Lecturer in Architecture, Princeton University