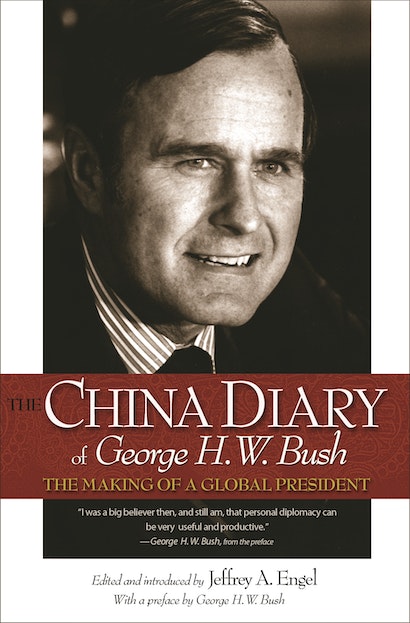 Available in print for the first time, this day-by-day diary of George H. W. Bush’s life in China opens a fascinating window into one of the most formative periods of his career. As head of the United States Liaison Office in Beijing from 1974 to 1975, Bush witnessed high-level policy deliberations and daily social interactions between the two Cold War superpowers. The China Diary of George H. W. Bush offers an intimate look at this fundamental period of international history, marks a monumental contribution to our understanding of U.S.-China relations, and sheds light on the ideals of a global president in the making.


In compelling words, Bush reveals a thoughtful and pragmatic realism that would guide him for decades to come. He considers the crisis of Vietnam, the difficulties of détente, and tensions in the Middle East, while lamenting the global decline in American power. He formulates views on the importance of international alliances and personal diplomacy, as he struggles to form meaningful relationships with China’s top leaders. With a critical eye for detail, he depicts key political figures, including Gerald Ford, Donald Rumsfeld, Deng Xiaoping, and the ever-difficult Henry Kissinger. Throughout, Bush offers impressions of China and its people, describing his explorations of Beijing by bicycle, and his experiences with Chinese food, language lessons, and Ping-Pong.


Complete with a preface by George H. W. Bush, and an introduction and essay by Jeffrey Engel that place Bush’s China experience in the broad context of his public career, The China Diary of George H. W. Bush offers an unmediated perspective on American diplomatic history, and explores a crucial period’s impact on a future commander in chief.

Jeffrey A. Engel teaches history and public policy at Texas A&M University's Bush School of Government & Public Service and is associate director of the Scowcroft Institute of International Affairs. He is the author of Cold War at 30,000 Feet.

"These diary entries—describing a cheerful round of visits, meals, tennis games, and efforts to strike up personal relationships with Chinese officials and the Beijing diplomatic corps—are nonetheless compulsive reading. They convey the local color of a quaint Beijing that is now lost to history, as well as reveal much about the gregarious character and social skills of the man who became the 41st U.S. president. Engel's exemplary notes and interpretative essay add to the volume's readability and scholarly value."—Andrew J. Nathan, Foreign Affairs

"[B]ush's year in China laid the foundations for the pragmatic, prudent, personal foreign policy that would characterize his presidency. With superb annotations and analysis by Jeffrey Engel, a professor of history and public policy at Texas A&M, Bush's daily diary sheds light not only on 'the making of a global president' but on two nations in transition: late Maoist China, as it moved, tentatively, toward engagement with the international community; and the United States, as it absorbed the implications of defeat in Vietnam."—Glenn C. Altschuler, Baltimore Sun

"As a president-to-be at a career crossroads and the second permanent representative of the U.S. in China, his frank thoughts recorded each night and now transcribed and expertly footnoted make for fascinating reading. Mr. Bush's official position and his lack of knowledge about China ensure that his diary offers little historically new. But in place of that, his day-by-day thoughts give something as valuable, a much-needed reminder of the diplomatic reality on the ground when the Sino-U.S. relationship was in its infancy. . . . In many ways, his time in China helped him to usher in a new world order with relatively little turbulence, regardless of how fragile that order is subsequently proving to be."—Paul Mozur, Far Eastern Economic Review

"In 1974, George H.W. Bush left his post as chair of the Republican National Committee to head the US legation in China. The assignment afforded him the opportunity to enrich his global vision and build on President Richard Nixon's 1972 opening to the communist regime there. Bush made the most of his ten months in Beijing. As edited and annotated in impressive detail by Jeffrey Engel, Bush's diary represents a treasure-trove of observations about the diplomatic climate, Chinese leaders, and the US notables who visited during his tenure."—M.J. Birkner, Choice

"Engaging, insightful, and accessible, this is a fascinating book, and certainly one of the most interesting published about the 41st President. Very highly recommended."—Stefan Fergus, Civilian Reader

"Although Sinologists will appreciate the details Bush offers of daily life for a U.S. diplomat in China in this era, political scientists might very well find the book's most useful offering to be its insights into his thinking."—May-Lee Chai, Asian Affairs

"The book is of unique historic, theoretical and practical value. Its ideal readership consists of international studies scholars and students of various disciplinary backgrounds, with particular interest in China studies as well as diplomatic and international business practioners. . . . I highly recommend it."—Wenshan Jia, Journal of Chinese Political Science

"When George Bush went to China in 1974, our two countries were still very much in the discovery stage of our relationship. His honest and personal reflections provide a rare, almost 'behind the scenes' window into that fascinating time period, and are a great reminder of how far we have come. The book is also a wonderful insight into the thought processes of a future president, who I believe history will judge as one of our greatest foreign policy presidents."—Lt. Gen. Brent Scowcroft, USAF (ret.), former national security advisor to Presidents Gerald Ford and George H. W. Bush

"George H. W. Bush's China diary captures a pivotal moment when Americans were reintroduced to the Middle Kingdom after a generation of estrangement. It also reveals much of the humanity, humor, and light foreign policy touch of a future president and presidential father. We can be grateful to Jeffrey Engel for putting this important document into its rich historical context and making it accessible."—Timothy Naftali, author of George H. W. Bush

"Engel's historical editing is the perfect frame to this lucid window on late-Maoist China. In the Bush diary's candid entries the reader can 'eavesdrop' on a statesman educating himself for the personal, pragmatic diplomacy that would change the world."—Walter A. McDougall, author of Pulitzer Prize-winning The Heavens and the Earth

"Full of useful and previously unavailable information, The China Diary of George H. W. Bush is a timely publication. This valuable narrative offers a firsthand account of U.S.-China relations during a critical political juncture, talks about the opportunities and challenges that America faced in Vietnam and elsewhere, and records the life of the Beijing diplomatic circle in the last years of the Cultural Revolution. There is absolutely no doubt that this is an important book."—Chen Jian, Cornell University

"The China Diary of George H. W. Bush is a real gem: accessible, lively, and informative. In its entirety, the diary makes a real contribution to our understanding of Bush's evolution as a politician and policymaker, and to our knowledge of Sino-American relations at a pivotal moment in time."—Michael Schaller, University of Arizona

"The insightful diary entries, the helpful chapter introductions, and the superb footnote annotations make this a sure winner for experts and non-experts alike! The China Diary of George H. W. Bush will be a widely read, widely cited, and widely influential book."—Jeremi Suri, University of Wisconsin-Madison