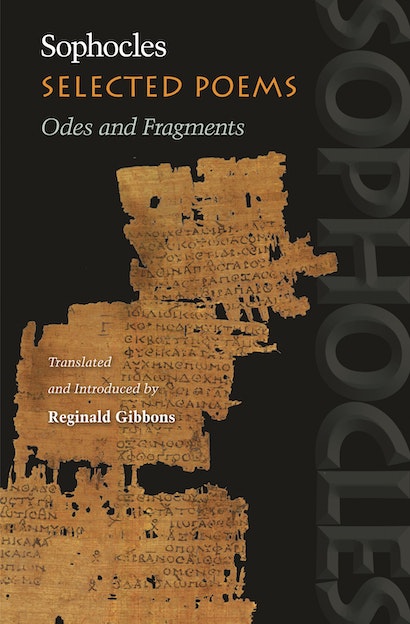 Sophocles’ tragedies — from Antigone to Oedipus Tyrannus — are filled with highly wrought, vivid, and emotionally powerful poetry. Yet most translations sacrifice the poetry to convey only the sense of the lines as dramatic speech. This is the first book in English to present Sophocles exclusively as a poet, and the only volume to reveal the full force and beauty of his verse. With a fresh and consistent attention to structure, language, and rhythm across Sophocles’ writings, Reginald Gibbons has translated a selection of odes from Sophocles’ surviving plays as well as fragments from his lost works. What emerges is a genuinely new sense of a Sophocles who was as much poet as dramatist. Bringing the Greek poet and his world surprisingly close to us, these translations also restore a sense of the long continuity of poetry. Complete with an introduction, this edition reveals Sophocles’ poetic brilliance as never before.

Reginald Gibbons is a poet, translator, and professor of English and classics at Northwestern University. He has translated Sophocles' Antigone and Euripides' Bakkhai (both with the late Charles Segal). His most recent collection of poetry is Creatures of a Day.

"The brilliance of Reginald Gibbons's translations of Sophocles lies in an empathetic leap of imagination that has allowed him to situate these ancient poems at an intersection where the passion of outcries, songs, and declamations encounters the elegance of the written word."—Stuart Dybek, author of I Sailed with Magellan

"Reginald Gibbons gives us Sophocles' poetry sprung free from plot and dramatic action. Elemental, swift, kaleidoscopic, the odes and fragments are forcefully present in Gibbons's spare style, and they can take one's breath away. Here is a distillate of Sophocles, strangely new and strangely familiar."—Rosanna Warren, author of Departure: Poems

"For years now, Reginald Gibbons has been writing some of the best poetry in America, and at the same time he has distinguished himself as one of the most brilliant and accomplished translators of Greek tragedy. In this beautiful and indispensable book, he renders the poetry of Sophocles as no one has done before. In Gibbons's hands, the complex power and musical precision of Sophoclean song and verse radiate a verbal and imagistic energy that feels both ancient and immediate."—Alan Shapiro, author of Old War: Poems

"Attuned to the nuances of the original, Gibbons's verse delivers a Sophoclean stateliness of bearing in an idiom that is supple enough to communicate the heat of Eros, the horror of war, and the awe inspired by the natural world."—Brooks Haxton, author of They Lift Their Wings to Cry: Poems

"To read these dramatic odes as poems is invigorating and invites us to see Sophocles in a new way. And making poems out of the fragments and including them alongside the odes is a brilliant stroke, providing instances of the Sophoclean lyric imagination. These translations are remarkably true to the Greek."—Stephen Scully, Boston University