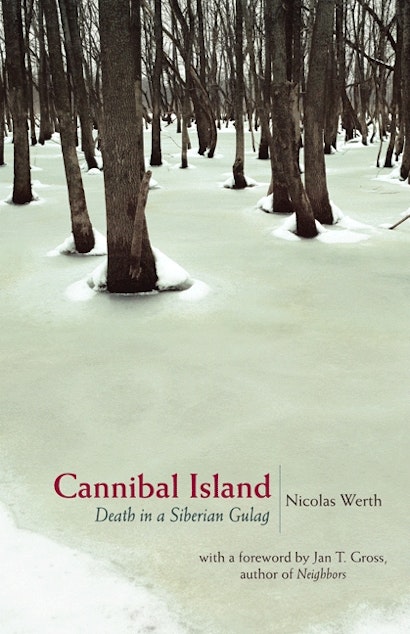 During the spring of 1933, Stalin’s police rounded up nearly one hundred thousand people as part of the Soviet regime’s “cleansing” of Moscow and Leningrad and deported them to Siberia. Many of the victims were sent to labor camps, but ten thousand of them were dumped in a remote wasteland and left to fend for themselves. Cannibal Island reveals the shocking, grisly truth about their fate.

These people were abandoned on the island of Nazino without food or shelter. Left there to starve and to die, they eventually began to eat each other. Nicolas Werth, a French historian of the Soviet era, reconstructs their gruesome final days using rare archival material from deep inside the Stalinist vaults. Werth skillfully weaves this episode into a broader story about the Soviet frenzy in the 1930s to purge society of all those deemed to be unfit. For Stalin, these undesirables included criminals, opponents of forced collectivization, vagabonds, gypsies, even entire groups in Soviet society such as the “kulaks” and their families. Werth sets his story within the broader social and political context of the period, giving us for the first time a full picture of how Stalin’s system of “special villages” worked, how hundreds of thousands of Soviet citizens were moved about the country in wholesale mass transportations, and how this savage bureaucratic machinery functioned on the local, regional, and state levels.

Cannibal Island challenges us to confront unpleasant facts not only about Stalin’s punitive social controls and his failed Soviet utopia, but about every generation’s capacity for brutality — including our own.

Nicolas Werth is a research director at the Centre National de la Recherche Scientifique in France. He is the coauthor of The Black Book of Communism.

"Review of the original French edition: "The mind-blowing story of a bureaucratic utopia that turned into carnage. A 'micro-history' that forms a representative example in a country where the inconceivable became the norm.""—Thomas Wieder, Le Monde

"[An] absorbing new book. . . . After detailing the lead-up to the deportation of the 'socially harmful elements' and the political situation surrounding it, Mr. Werth zeroes in on the Nazino affair to illustrate the policy's devastating effect."—Martha Mercer, New York Sun

"Few books have captured the human tragedy of Stalin's bloody reign so succinctly or with such force."—Douglas Smith, Seattle Times

"Cannibal Island is a grim tale of ten thousand 'anti-social elements' deposited on an empty Siberian island in the Ob river in the 1930s. But, more than that, it is a story of how the brutal purge machinery was oiled and run at its lowest level."—Paul E. Richardson, Russian Life Magazine

"Nicolas Werth's excellent history of the Nazino gulag is a portrait of a place that went from terrible to unimaginable.... In a strong field, Cannibal Island is one of the grisliest and most unpleasant accounts of gulag life.... This one ranks as one of the more memorable exhibits in the gallery of horrors."—Graeme Wood, Weekly Standard

"This is an utterly harrowing account of the 'bloody implementation of a utopia' and an exemplary analysis of the Soviet state, with its 'number culture' and 'pseudocategorizations' — all of this underpinned, of course, by the most spectacular cruelty."—Richard King, Sydney Morning Herald

"Often the details in a single instance sear more deeply than the most gruesome tally of large numbers....Werth describes in rich detail the transformation of the vast western Siberian wilderness into the dumping ground for millions of 'de-kulakized' peasants, minority groups from the borderlands, the socially marginal, criminals, and the utterly innocent....These 'special settlements' are a part of the gulag's least-known history. Werth corrects that in plain and clear language, leaving the story to convey its own excruciating eloquence."—Robert Levgold, Foreign Affairs

"Nicolas Werth's book is the stuff of nightmares. It recounts the fate of 6,000 'special settlers', rounded up in Moscow and Leningrad in 1933 and sent to the island of Nazino in the Ob River in Western Siberia."—Carla King, Irish Times

"The author demonstrates encyclopedic erudition and provides nuanced explanations. Ample quotations from reports and letters of government officials give the book its sense of immediacy. In other words, the volume is both scholarly and absorbing, which is a rare combination."—Michael Jakobson, Slavic Review

"In short, this remarkable case study of dysfunction and terror makes a valuable contribution to our understanding of Stalinism."—JeffreyS.Hardy, H-Net Reviews

"[This book] mark[s] a quantitative leap forward in data now available in English on these important and complex problems that had previously been much neglected."— Stephen G. Wheatcroft, American Historical Review

"Werth's meticulous approach to the study of social order and administrative norms in the Stalin era is likely to be of real interest to specialists in GULAG studies, camp memoirs, and Soviet culture in general. Clearly and forcefully argued, Cannibal Island does an excellent job of reconstructing the way in which Soviet officials and institutions operated in the 1930s. Readable enough to serve as a good source for undergraduates working on research papers in Soviet history and culture, this volume would make a good addition to even the most modest university library collections."—Emily D. Johnson, Slavic and East European Journal

"Cannibal Island is a valuable addition to emerging Gulag scholarship in so far as it demonstrates how, in the early 1930s, this network of labour camps and settlements also began serving as a dumping ground for those elderly, destitute, and physically and mentally disabled 'elements' the regime expunged from urban centres."—Andrew A. Gentes, European History Quarterly

"This short yet extraordinarily rich account of Stalinist politics and Soviet life should be read widely."—Hiroaki Kuromiya, Slavonic and East European Review

"Perhaps it is not surprising that Nicolas Werth, the French historian who cowrote The Black Book of Communism, has decided in Cannibal Island to return to an incident he merely mentioned in that vast book. He was right to do so: in its way, this small, brilliant work, the description of a single incident, is every bit as powerful a condemnation of Communist ideology as the Black Book itself."—Anne Applebaum, Pulitzer Prize-winning author of Gulag: A History

"In this gripping new work, Nicolas Werth documents the horrifying story of the forced deportation of 'socially-dangerous elements' from Moscow and Leningrad to the forbidding island of Nazino. With the use of dramatic new documents from previously classified Soviet archives, he chronicles for the first time in English the atrocities that unfolded on 'cannibal island.' This is an absorbing, indeed chilling tale of savagery, highlighting in microcosm the brutal realities of Stalinist socialism in action."—Lynne Viola, author of The Unknown Gulag: The Lost World of Stalin's Special Settlements

"Werth has as solid a command of the Soviet-era archival documentation as anyone. But while he lays out a synthetic, institutional panorama of a segment of Soviet bureaucracy, he can write at the same time a story full of suspense, in a crisp and lucid style. He certainly does both with shattering effect in his Cannibal Island."—Jan T. Gross, author of Neighbors: The Destruction of the Jewish Community in Jedwabne, Poland