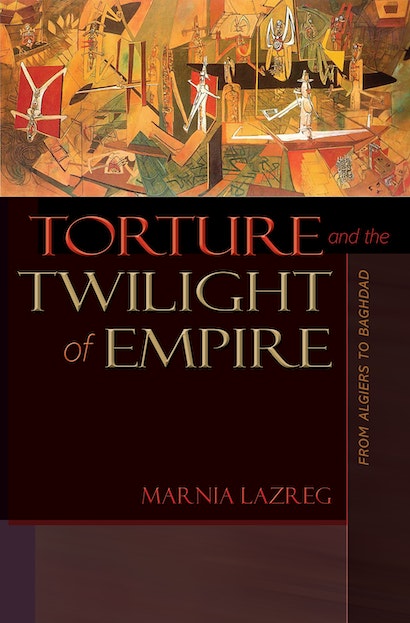 Torture and the Twilight of Empire looks at the intimate relationship between torture and colonial domination through a close examination of the French army’s coercive tactics during the Algerian war from 1954 to 1962. By tracing the psychological, cultural, and political meanings of torture at the end of the French empire, Marnia Lazreg also sheds new light on the United States and its recourse to torture in Iraq and Afghanistan.


This book is nothing less than an anatomy of torture — its methods, justifications, functions, and consequences. Drawing extensively from archives, confessions by former torturers, interviews with former soldiers, and war diaries, as well as writings by Jean-Paul Sartre, Albert Camus, and others, Lazreg argues that occupying nations justify their systematic use of torture as a regrettable but necessary means of saving Western civilization from those who challenge their rule. She shows how torture was central to guerre révolutionnaire, a French theory of modern warfare that called for total war against the subject population and which informed a pacification strategy founded on brutal psychological techniques borrowed from totalitarian movements. Lazreg seeks to understand torture’s impact on the Algerian population — especially women — and also on the French troops who became their torturers. She explores the roles Christianity and Islam played in rationalizing these acts, and the ways in which torture became not only routine but even acceptable.


Written by a preeminent historical sociologist, Torture and the Twilight of Empire holds particularly disturbing lessons for us today as we carry out the War on Terror.

Marnia Lazreg is professor of sociology at Hunter College and the Graduate Center of the City University of New York. Her books include The Eloquence of Silence: Algerian Women in Question.

"In Torture and the Twilight of Empire, Marnia Lazreg draws resourcefully on military history and sociological and cultural analysis to explain how the French colonial state tried to forestall its own collapse by terrorizing the Algerian population in viciously creative ways. She provides a fascinating intellectual history of modern torture; an unflinching empirical account, or 'ethnography of torture.'"—Priya Satia, Times Literary Supplement

"Nothing short of a thorough anatomy of torture and cruelty, their methods, justifications, functions and consequences both on the victims as well as the perpetrators. . . . The author effectively argues that the occupying Western powers have not only justified their systematic use of torture and cruelty as a regrettable but necessary means of protecting and saving Western civilization from those 'who hate our way of life' but they have also used this argument as a pretext for invading and colonizing those nations that dare to challenge Western politico-economic hegemony. . . . Recommended reading."—Muhammad Khan, Muslim News

"In this brilliant and disturbing book [Marnia Lazreg] looks at the intimate relationship between torture and colonial domination through a rigorous examination of French tactics during the Algerian war from 1954-62."—Will Podmore, Tribune

"The philosophical analyses can be challenging to grasp, but for those looking to better understand the way torture figures into a military occupation, Lazreg's book provides an insightful and detailed account of the Algerian model."—Hannah Fleury, International Socialist Review

"As a highly original, yet solid, analysis of the political sociology, psychology, and anthropology of torture, Lazreg's research establishes critical connections between Algeria and the Shock and Awe Campaign of the Second Gulf War with the Bush White House years marked by state terror abroad and at home. . . . This book is required reading for all."—Julia Clancy-Smith, Review of Middle Eastern Studies

"This book interprets torture not as an incidental if frequent characteristic of neocolonial conflict, but as one of its major elements. Using the Algerian war as a case study, Lazreg argues that to the French forces the psychological and political significance of their policy of torture was far greater than its operational significance. Her work is certainly pertinent to the present."—Peter Paret, Institute for Advanced Study