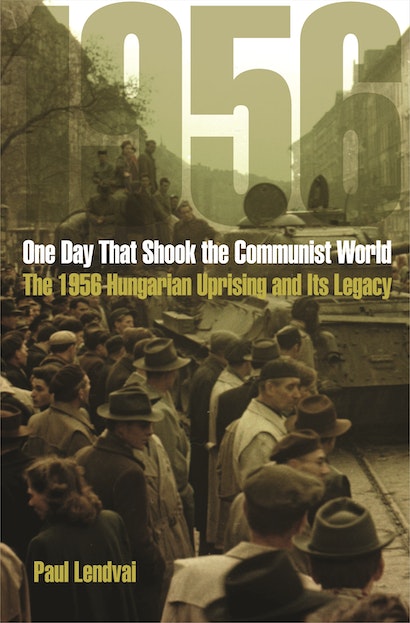 On October 23, 1956, a popular uprising against Soviet rule swept through Hungary like a force of nature, only to be mercilessly crushed by Soviet tanks twelve days later. Only now, fifty years after those harrowing events, can the full story be told. This book is a powerful eyewitness account and a gripping history of the uprising in Hungary that heralded the future liberation of Eastern Europe.


Paul Lendvai was a young journalist covering politics in Hungary when the uprising broke out. He knew the government officials and revolutionaries involved. He was on the front lines of the student protests and the bloody street fights and he saw the revolutionary government smashed by the Red Army. In this riveting, deeply personal, and often irreverent book, Lendvai weaves his own experiences with in-depth reportage to unravel the complex chain of events leading up to and including the uprising, its brutal suppression, and its far-reaching political repercussions in Hungary and neighboring Eastern Bloc countries. He draws upon exclusive interviews with Russian and former KGB officials, survivors of the Soviet backlash, and relatives of those executed. He reveals new evidence from closed tribunals and documents kept secret in Soviet and Hungarian archives. Lendvai’s breathtaking narrative shows how the uprising, while tragic, delivered a stunning blow to Communism that helped to ultimately bring about its demise.

One Day That Shook the Communist World is the best account of these unprecedented events.

Paul Lendvai is a leading European journalist and senior commentator on Austrian television. He is editor in chief of the Vienna-based international quarterly Europäische Rundschau. He is the author of thirteen books, including The Hungarians: A Thousand Years of Victory in Defeat (Princeton).

"Based on his own experiences, Lendvai adds a sharp focus to understanding of one of the most important events of the 20th century, the spontaneous Hungarian uprising. He maintains a balanced account of the causes and consequences of this heroic but tragic revolt, including the nonassistance of the Western nations, especially the U.S."—T.M. Racz, Choice

"Lendvai's approach and style make this book a particularly welcome addition to the scholarship on the Hungarian revolution. . . . Though the entire book has a great deal to offer the reader . . . [the] final chapters, evaluating the legacy of the 1956 uprising, are the ones where Lendvai offers his most striking additions to the history of the revolution."—Eliza Ablovatski, Austrian History Yearbook

"Lendvai has produced a sophisticated narrative of complex events, interweaving political, international, military, social, personal, and intellectual history into a thick fabric of historical text. Importantly, he argues that 1956 is an important year in Hungarian, and Western, heritage. Commendably, Lendvai shows his intellectual debt to Hungarian scholars throughout the text. One Day That Shook the Communist World is one of the most readable and best English language accounts of the Hungarian 1956 Uprising."—Laszlo Borhi, Historian

"The detail in this work is impressive, the narrative engaging, and the judgments considered."—David W. Lovell, European Legacy

"A brilliant synthesis of the events of 1956 and their background written in Lendvai's smooth, intelligent, and witty style, with the same elegant translation known to readers from his highly successful book, The Hungarians. Lendvai has a remarkable facility for unmasking the many lies told during the past half century by the Soviet and Hungarian Communists, as well as legends perpetrated by Hungarian nationalists."—István Deák, coeditor of The Politics of Retribution in Europe