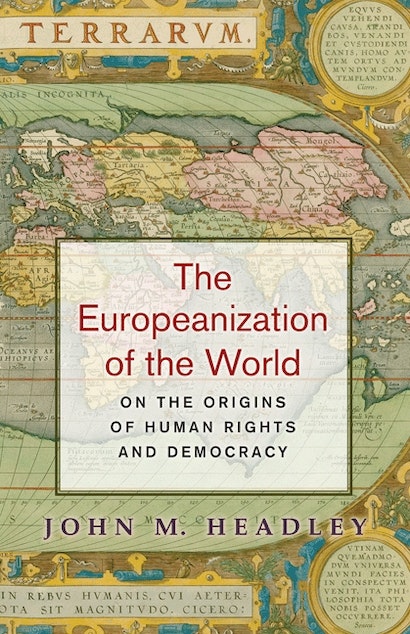 The Europeanization of the World puts forward a defense of Western civilization and the unique gifts it has bequeathed to the world-in particular, human rights and constitutional democracy-at a time when many around the globe equate the West with hubris and thinly veiled imperialism. John Headley argues that the Renaissance and the Reformation provided the effective currents for the development of two distinctive political ideas. The first is the idea of a common humanity, derived from antiquity, developed through natural law, and worked out in the new emerging global context to provide the basis for today’s concept of universal human rights. The second is the idea of political dissent, first posited in the course of the Protestant Reformation and later maturing in the politics of the British monarchy.


Headley traces the development and implications of this first idea from antiquity to the present. He examines the English revolution of 1688 and party government in Britain and America into the early nineteenth century. And he challenges the now — common stance in historical studies of moral posturing against the West. Headley contends that these unique ideas are Western civilization’s most precious export, however presently distorted. Certainly European culture has its dark side — Auschwitz is but one example. Yet as Headley shows, no other civilization in history has bequeathed so sustained a tradition of universalizing aspirations as the West. The Europeanization of the World makes an argument that is controversial but long overdue. Written by one of our preeminent scholars of the Renaissance and Reformation, this elegantly reasoned book is certain to spark a much-needed reappraisal of the Western tradition.

John M. Headley is professor emeritus of history at the University of North Carolina, Chapel Hill. His books include Tommaso Campanella and the Transformation of the World (Princeton).

"Headley flies in the face of post-1960s criticism of the West to argue that the Renaissance and the Reformation laid the groundwork for the world's present understanding of human rights and constitutional democracy. . . . Headley offers considerable evidence for these Western contributions to pushing diverse cultures toward a new, globalized way of life. . . . In a brief epilogue, [he] sets aside his scholarly mien to launch a devastating critique of American policies at home and abroad since 2001. . . . A densely written defense of the Western tradition."—Kirkus Reviews

"This is a provocative, compelling, and successful book that traces the culture-transcending qualities of the idea of a common humanity and political dissent in Europe. . . . Balanced and deeply intelligent, Headley's book recasts the role of European civilization in shaping our future."—A.R. Brunello, Choice

"John Headley's lucid study of the intellectual origins of human rights and democracy in the European tradition rewards the careful reader. . . . Headley has written an excellent book, penetrating and well-written. The two sections on the United States described above arc in brief, isolated sections, and have little to do with the rest of the book. The reader stands to gain a great deal from this senior scholar's broad analysis of these distinctly European values."—John F. Kicza, Renaissance Quarterly

"There is much in this book for Renaissance scholars, historical sociologists, and students of contemporary history. For the . . . historically oriented sociologist, the book is an important contribution to understanding the European heritage."—Gerard Delanty, American Historical Review

"A wonderful book! The author dives deep into his extensive work on the Renaissance in order to explore the roots of human rights and democracy in the European heritage, and then extends his insights into the contemporary period. The scholarship and theoretical sophistication make this book a must-read for all thoughtful people, especially those concerned with political theory and globalization."—Bruce Mazlish, Massachusetts Institute of Technology

"This is an important book. The argument that there is something unique about European civilization from a global perspective is highly relevant to contemporary political and cultural debate. The scholarship placing the sources of this uniqueness in the history of the European Renaissance as it encountered and conceptualized other worlds is of the first order."—Joan-Pau Rubiés, London School of Economics and Political Science

"This is a short book that addresses a very large topic. It is an exceedingly fair-minded, judicious, and learned attempt to deal with an important and controversial topic, and it treats the matter in a challenging and thought-provoking fashion. My judgment is that Professor Headley has succeeded admirably."—Paul A. Rahe, University of Tulsa