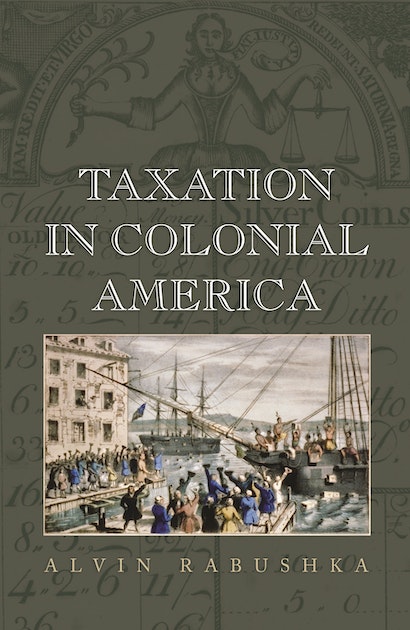 Taxation in Colonial America examines life in the thirteen original American colonies through the revealing lens of the taxes levied on and by the colonists. Spanning the turbulent years from the founding of the Jamestown settlement to the outbreak of the American Revolution, Alvin Rabushka provides the definitive history of taxation in the colonial era, and sets it against the backdrop of enormous economic, political, and social upheaval in the colonies and Europe.


Rabushka shows how the colonists strove to minimize, avoid, and evade British and local taxation, and how they used tax incentives to foster settlement. He describes the systems of public finance they created to reduce taxation, and reveals how they gained control over taxes through elected representatives in colonial legislatures. Rabushka takes a comprehensive look at the external taxes imposed on the colonists by Britain, the Netherlands, and Sweden, as well as internal direct taxes like poll and income taxes. He examines indirect taxes like duties and tonnage fees, as well as county and town taxes, church and education taxes, bounties, and other charges. He links the types and amounts of taxes with the means of payment — be it gold coins, agricultural commodities, wampum, or furs — and he compares tax systems and burdens among the colonies and with Britain.


This book brings the colonial period to life in all its rich complexity, and shows how colonial attitudes toward taxation offer a unique window into the causes of the revolution.

Alvin Rabushka is the David and Joan Traitel Senior Fellow at the Hoover Institution at Stanford University. His books include The Flat Tax.

"Running to nearly a thousand pages, this massive compendium of Colonial American tax data draws together disparate primary and secondary sources in an impressive feat of scholarship. Rabushka provides context for the wealth of public finance detail through a constitutional history ranging from the Magna Carta, through the early Colonial charters and Parliament's subordination of the monarchy, the Parliament's final confrontations with the increasingly assertive Colonies. . . . Encyclopedia, with much narratives committed to tax listings, this volume is a valuable resource for research."—R. S. Hewett, Choice

"Alvin Rabushka has written an extraordinary history of early American taxation. Weighing in at 3 pounds, 5 ounces, and running to almost 1,000 pages, it's a big book. But it needs to be, for this is historical work on a grand scale. Rabushka has managed to compress into a single volume a detailed history of the colonial tax systems between the settlement of Jamestown and the beginning of the Revolutionary War. It's an extraordinary accomplishment."—Joseph J. Thorndike, Tax Notes

"[T]hanks to Rabushka's work, more can now be done on the history of trans-Atlantic connections. The originality of this book is in its mastery of the printed secondary and primary works, thus offering the most definitive resource to date on the subject of taxation in colonial America."—William J. Ashworth, Enterprise & Society

"Makes an enormously significant contribution to scholarship on the British North American colonies. Every university with an active graduate program, plus all the major independent research centers, should add this jewel to their library holdings. Alvin Rabushka has produced an astonishing and overwhelming labor of love, and colonial historians will remain forever in the author's debt for his prodigious research on the various tax systems in the thirteen colonies from 1607 through 1775. . . . This handsomely produced volume could become the standard reference on colonial taxation for the next thousand years. Yes, that long."—Edward J. Perkins, Journal of American History

"The volume is one that scholars will find enduringly useful."—American Historical Review

"Written for the average layperson without a detailed knowledge of history or taxation, the book is certain to become a standard in the field."—Stephanie Towery, Law Library Journal

"Every scholar of colonial America should have this book on their shelf."—Farley Grubb, Journal of Imperial and Commonwealth History

"Rabushka's work is encyclopedic in scope, thorough and fastidious in its mobilization of both tax-history scholarship and primary sources on colonial finance, and probing in its analysis of budgets and taxes. His mastery and crystal-clear explanations of previously baffling intricacies of colonial taxation means that his book is now the best starting point for anyone interested in the colonial foundations of American taxation."—W. Elliot Brownlee, Harvard Business History Review

"This massive compendium of colonial American tax data draws together disparate primary and secondary sources in an impressive feat of scholarship. It provides an encyclopedic account of taxation in all thirteen colonies from the onset of European colonization to the American Revolution."—Roger Hewett, EH.net

"A significant contribution. There is no other book like this one. It is a grand synthesis of mountains of previous work and colonial records. It pulls together a vast amount of scholarship of the past century or two, and in a convenient and accessible way. For anyone doing serious work on colonial taxation, it is the one book to have."—Richard Sylla, New York University

"Encyclopedic and definitive. I was deeply impressed by the wealth of detail quite unknown to me. This is the fruit of intensive and extensive scholarship."—Niall Ferguson, Harvard University