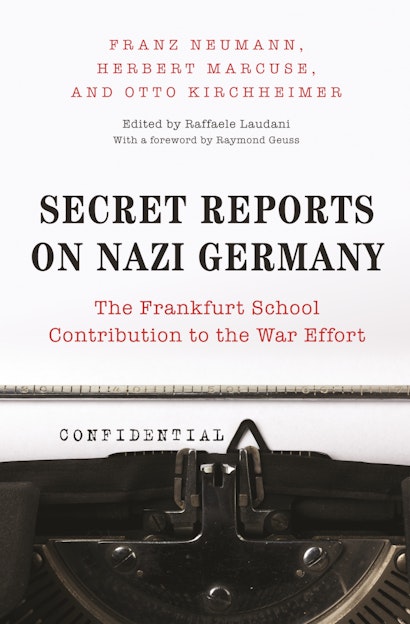 During the Second World War, three prominent members of the Frankfurt School—Franz Neumann, Herbert Marcuse, and Otto Kirchheimer—worked as intelligence analysts for the Office of Strategic Services, the wartime forerunner of the CIA. This book brings together their most important intelligence reports on Nazi Germany, most of them published here for the first time.

These reports provide a fresh perspective on Hitler’s regime and the Second World War, and a fascinating window on Frankfurt School critical theory. They develop a detailed analysis of Nazism as a social and economic system and the role of anti-Semitism in Nazism, as well as a coherent plan for the reconstruction of postwar Germany as a democratic political system with a socialist economy. These reports played a significant role in the development of postwar Allied policy, including denazification and the preparation of the Nuremberg Trials. They also reveal how wartime intelligence analysis shaped the intellectual agendas of these three important German-Jewish scholars who fled Nazi persecution prior to the war.

Secret Reports on Nazi Germany features a foreword by Raymond Geuss as well as a comprehensive general introduction by Raffaele Laudani that puts these writings in historical and intellectual context.

Franz Neumann (1900-1954) was a labor lawyer and political activist in Germany before the Nazi period, and was a professor of political science at Columbia University after his work in the OSS and at the Nuremberg Trials. Herbert Marcuse (1898-1979) was a philosopher who made important contributions to the Frankfurt School critical theory of society. He taught at Brandeis and San Diego universities after his work in the OSS. Otto Kirchheimer (1905-1965) worked for the OSS until 1952. Later he was professor of political science at the New School for Social Research and Columbia. Raffaele Laudani is assistant professor of the history of political thought at the University of Bologna.

"[A] fascinating collection. . . . The history of wartime intelligence is a developing field, and this material is a welcome addition."—Library Journal

"[S]ome of the most brilliant analysis of Nazi Germany ever written and a valuable lesson in postwar planning. . . . [A] rich and multi-layered collection of political essays that will be of enduring interest to students of military intelligence, Marxism, Nazi Germany and the Allied effort in the Second World War."—John Bew, New Statesman

"Editor Laudani laces the reports throughout the forward, introduction, and short biographies, placing them in the larger context of critical theory and as tools for assessing postwar liberal democracy. Overall, the reports offer highly readable, objective assessments and possible reforms."—Choice

"[A] highly valuable source for anyone interested in intellectual history, the history of ideas, the history of the Second World War, Nazi Germany or wartime intelligence. . . . The texts presented within this volume will most certainly remain essential reading material for anyone dealing with the so-called Frankfurt School, as well as for those scholars and students dealing with wartime intelligence structures, Nazi Germany and the Second World War."—Goran Miljan, European Review of History

"Secret Reports on Nazi Germany is a work of immense scholarly value that can serve as an important resource for scholars and students interested in the Second World War, U.S. postwar policy, the origins of the Cold War, critical theory, and the politics of exile. Most important, the reports in this collection provide a critical starting point for tracing the historiography on Nazism in the United States."—Anne Berg, H-Net Reviews

"Secret Reports On Nazi Germany is a whole different, yet substantially significant, eye opening, scholarly saga, that simply needs to be read by all those who are remotely interested in what actually took place in wartime Nazi Germany. In other words, it's the real deal. . . . Secret Reports on Nazi Germany is an exceptionally well put together account of a country simply gone mad. More importantly, it's fresh and it's incisive."—David Marx, David Marx: Book Reviews

"This collection brings alive with exceptional force the real politics behind critical theory. It highlights the range and sophistication of a vast array of intelligence reports about the structures of power and domination under National Socialist rule, compiled through the teamwork of Franz Neumann, Herbert Marcuse, and Otto Kirchheimer. Their cool objectivity is remarkable, and reminds us just how indebted we remain to their pioneering work."—Duncan Kelly, University of Cambridge

"An intellectual dispossessed is an intellectual driven to understand the techniques of his dispossession. This indispensable volume assembles key texts by three German-Jewish refugees from Nazi Germany who contributed to America's wartime effort and the planning for postwar reconstruction. A fascinating archive for historians and political theorists alike, it reminds us that the Institute for Social Research carried to our shores not only philosophers but also worldly critics of modern dictatorship. Their insights have lost none of their relevance or power."—Peter E. Gordon, Harvard University

"Secret Reports on Nazi Germany offers unique and privileged insight into three of twentieth-century Germany's most outstanding political minds: Franz Neumann, Herbert Marcuse, and Otto Kirchheimer. It is fascinating to follow their thought processes and ruminations as they sift through intelligence reports and newspaper articles in order to assess the German political situation during the eventful final two years of the National Socialist dictatorship."—Richard Wolin, author of Heidegger's Children: Hannah Arendt, Karl Löwith, Hans Jonas, and Herbert Marcuse

"This illuminating collection brings together for the first time key texts by Neumann, Marcuse, and Kirchheimer, and offers important insights into Nazi Germany. Laudani has provided an excellent scholarly service."—Douglas Kellner, University of California, Los Angeles, author of Media Spectacle and Insurrection, 2011: From the Arab Uprisings to Occupy Everywhere