How an eccentric spiritualist from Trenton, New Jersey, helped create the most famous text of Tibetan Buddhism 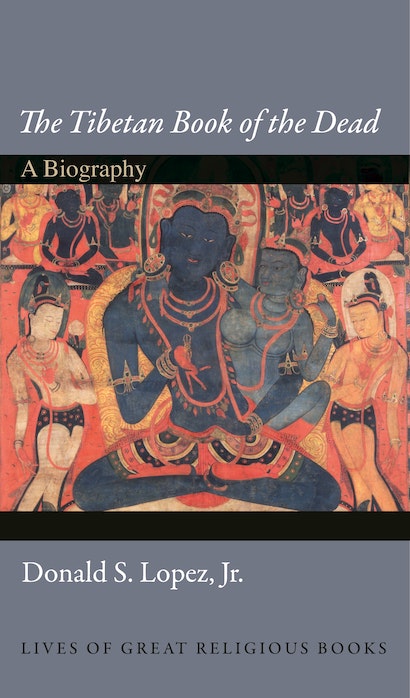 The Tibetan Book of the Dead is the most famous Buddhist text in the West, having sold more than a million copies since it was first published in English in 1927. Carl Jung wrote a commentary on it, Timothy Leary redesigned it as a guidebook for an acid trip, and the Beatles quoted Leary’s version in their song “Tomorrow Never Knows.” More recently, the book has been adopted by the hospice movement, enshrined by Penguin Classics, and made into an audiobook read by Richard Gere. Yet, as acclaimed writer and scholar of Buddhism Donald Lopez writes, “The Tibetan Book of the Dead is not really Tibetan, it is not really a book, and it is not really about death.” In this compelling introduction and short history, Lopez tells the strange story of how a relatively obscure and malleable collection of Buddhist texts of uncertain origin came to be so revered—and so misunderstood—in the West.

The central character in this story is Walter Evans-Wentz (1878-1965), an eccentric scholar and spiritual seeker from Trenton, New Jersey, who, despite not knowing the Tibetan language and never visiting the country, crafted and named The Tibetan Book of the Dead. In fact, Lopez argues, Evans-Wentz’s book is much more American than Tibetan, owing a greater debt to Theosophy and Madame Blavatsky than to the lamas of the Land of Snows. Indeed, Lopez suggests that the book’s perennial appeal stems not only from its origins in magical and mysterious Tibet, but also from the way Evans-Wentz translated the text into the language of a very American spirituality.

Donald S. Lopez, Jr., is the Arthur E. Link Distinguished University Professor of Buddhist and Tibetan Studies at the University of Michigan. His many books include The Story of Buddhism (HarperOne) and Prisoners of Shangri-La: Tibetan Buddhism and the West. He has also edited a number of books by the Dalai Lama.

"A scholarly and informative short read, very useful as a reminder that religious books are not necessarily fixed entities."—James F. DeRoche, Library Journal

"The focus of Donald Lopez's ingenious, informative, and engagingly written 'biography' is not so much the original Tibetan text but the pioneering edition and translation first issued in 1927 by the American traveler, scholar, and Theosophist W.Y. Evans-Wentz."—Roger Jackson, Buddhadharma: The Practitioner's Quarterly

"[T]his biography springs to life when Lopez places its subject within the weird tradition of American spiritualism, complete with Madame Blavatsky's acolytes, Ouija boards and memories of exotic past lives."—Miriam Cosic, The Australian

"What makes Lopez's biography of Evans-Wentz's book not only amusing (as it unfailingly is) but enlightening is that one suspects he too could have 'chosen any Asian text' that had been ripped from its context and composed a similar story of how meanings, willy-nilly, had attached themselves to it. Having read Lopez's book, we will look afresh at the volumes of unmoored wisdom so many in the West have taken to heart."—David Cozy, Japan Times

"The Tibetan Book of the Dead: A Biography is an excellent short introduction to Buddhism, and an intriguing analysis of how ancient texts are used (or invented) to give authority to ideologies."—Heather Shaw, Portland Book Review

"Concise and written with Lopez's usual clarity, this short book at times reads like an exciting spiritual detective story as the author methodically takes the reader through the improbable developments that led to the creation of what, in some sense, is a Western creation brought forth from Eastern concepts. . . . Although written for a popular audience, this book should be of interest to all scholars interested in the metamorphosis of Buddhism as the dharma has become transplanted in the West."—George Adams, NovaReligio

"Lopez is a good scholar with an engaging style . . . and a reader new to the Tibetan Book of the Dead will find this book a reliable and often entertaining introduction to the work and to its Tibetan and Western histories."—Geoffrey Samuel, European Legacy

"Although the book addresses a broad and general audience, it is still an excellent scholarly study on the translation and transformation of Tibetan texts into a single English book that eventually became a 'timeless world spiritual classic.' The study is firmly set in the complex trajectories of transcultural encounters and should benefit religious studies scholars from different fields of research. For scholars of American religious history, Buddhism in the West, and contemporary religion in the Euro-American context, the book provides an accessible account of the Buddhist and Tibetan background of the text in question; for scholars from Buddhist and Tibetan studies, the book offers a window to modernist adaptations and interpretations of Buddhist texts in 20th-century America. This slim volume will function well in the undergraduate classroom to demonstrate that religious texts are not timeless and fixed entities. . . . Lopez's narrative biography of The Tibetan Book of the Dead will provide a useful and accessible reading assignment for more specialized classes."—Katja Rakow, Religion

"This [is a] magnificent little piece of literary iconoclasm."—Michel Clasquin-Johnson, Relegre-Studies in Religion and Reception

"On the history of Buddhism and its transmission to the West, Donald Lopez is the unsurpassable master. The story he tells here about a book that is 'not really Tibetan' and 'not really about death' glistens with delicious ironies and arresting historical parallels. Who else but Lopez would begin a history of The Tibetan Book of the Dead with the story of Mormon prophet Joseph Smith—and then, like a mystery writer, reveal the connections at the end? This is a sly and wildly entertaining book."—Kenneth L. Woodward, contributing editor, Newsweek

"The Tibetan Book of the Dead has a wonderful story, and in this fascinating and charming little book, Donald Lopez reveals himself to be a wonderful storyteller."—Jack Miles, author of God: A Biography

"This book offers a fascinating and fresh discussion of The Tibetan Book of the Dead and its life as a text in the United States. Donald Lopez argues that persistent threads in American religious life—the tradition of the 'found' text as a repository for ancient wisdom, and a philosophical interest in life after death—help explain the overwhelming success of the book and its endurance as a cultural artifact."—Laurie F. Maffly-Kipp, University of North Carolina, Chapel Hill