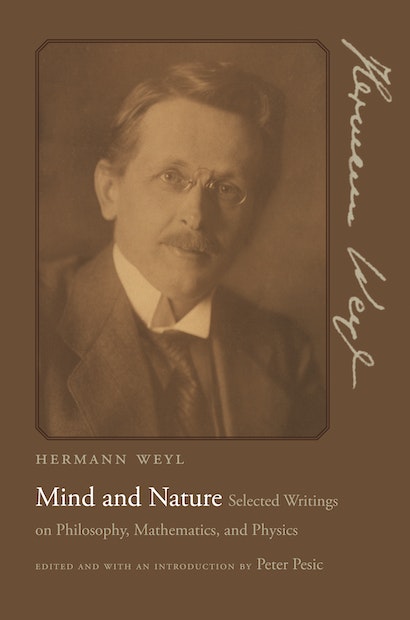 Hermann Weyl (1885-1955) was one of the twentieth century’s most important mathematicians, as well as a seminal figure in the development of quantum physics and general relativity. He was also an eloquent writer with a lifelong interest in the philosophical implications of the startling new scientific developments with which he was so involved. Mind and Nature is a collection of Weyl’s most important general writings on philosophy, mathematics, and physics, including pieces that have never before been published in any language or translated into English, or that have long been out of print. Complete with Peter Pesic’s introduction, notes, and bibliography, these writings reveal an unjustly neglected dimension of a complex and fascinating thinker. In addition, the book includes more than twenty photographs of Weyl and his family and colleagues, many of which are previously unpublished.


Included here are Weyl’s exposition of his important synthesis of electromagnetism and gravitation, which Einstein at first hailed as “a first-class stroke of genius”; two little-known letters by Weyl and Einstein from 1922 that give their contrasting views on the philosophical implications of modern physics; and an essay on time that contains Weyl’s argument that the past is never completed and the present is not a point. Also included are two book-length series of lectures, The Open World (1932) and Mind and Nature (1934), each a masterly exposition of Weyl’s views on a range of topics from modern physics and mathematics. Finally, four retrospective essays from Weyl’s last decade give his final thoughts on the interrelations among mathematics, philosophy, and physics, intertwined with reflections on the course of his rich life.

Peter Pesic is Tutor and Musician-in-Residence at St. John's College in Santa Fe, New Mexico. His books include Abel's Proof: An Essay on the Sources and Meaning of Mathematical Unsolvability and Seeing Double: Shared Identities in Physics, Philosophy, and Literature.

"This work edited by Pesic is an interesting collection of Hermann Weyl's essays, letters, and manuscripts. Though Weyl certainly made important contributions to mathematics and physics, this collection gives a broader picture of his work and thinking. Including many previously unpublished works and photographs, Mind and Nature presents what Weyl saw as the connections between mathematics, physics, and metaphysics."—Choice

"Weyl's Mind and Nature: Selected Writings on Philosophy, Mathematics, and Physics is of more interest to historians or to philosophers like me, but I still heartily recommend it to physicists and mathematicians. A selection of philosophical writings from the period 1921-55, it is beautifully edited with an introduction and scholarly endnotes by Peter Pesic. Mind and Nature includes several treasures. . . . What a pleasure, what a privilege, to read and contemplate Hermann Weyl's monumental achievements."—Jeremy Butterfield, Physics Today

"Edited by Peter Pesic . . . these works show a side of Weyl deeply concerned about the nature of infinity, knowledge, and truth. . . . Rarely are we given insights into the thinking of great mathematicians of the past. Even more rarely are we given their thinking presented with such thought and obvious care. This book should produce a reflective response among the teachers of mathematics who read it."—Mathematics Teacher

"[T]hese books have much to stimulate the philosopher of science today, perhaps because of, rather than in spite of the heavily idealistic leanings. More importantly, they still have much to offer the philosophically minded physicist and mathematician."—Jeremy Gray, MAA Reviews

"Pesic has collected here a selection of Weyl's writings that beautifully present the underlying synthesis of philosophy, mathematics and physics in his work, and in particular those that have remained unpublished, untranslated or that have simply fallen out if print. . . . One must be content with dipping into these essays and relishing their fecundity and insight."—Steven French, Metascience

"Hermann Weyl was not only a great mathematician who made a significant impact on physics, but he was also a thinker. He pondered at length on the philosophical implications of his work and he expressed himself with clarity and style both in his native German and subsequently in his adopted English. Bringing together all his general writing is an immense service to the English-reading public."—Sir Michael Atiyah, Fields Medalist

"Hermann Weyl ranks among the greatest mathematicians, and his deep contributions to physics were decades ahead of their time. But to know him only through his science is to miss the soul of a seeker. For Weyl, the experienced world in all its aspects was an inexhaustible source of wonder and inspiration. Here you can share in the life adventure of a beautiful mind."—Frank Wilczek, Nobel Prize—winning physicist

"For the first time, this marvelous book collects Hermann Weyl's most important and intriguing writings on the philosophy of physics and mathematics. These pieces shed light on aspects of his thought that are still only partially understood and that have not gained sufficient attention, especially in the English-speaking world, including his engagement with Heidegger, his exploration of the relations between mind and nature, and his attempt to create a kind of natural philosophy."—Norman Sieroka, ETH Zurich

"This is an important complement to Weyl's Philosophy of Mathematics and Natural Science because most of the pieces in this new collection were written later and demonstrate that his contribution to the philosophical reflection on mathematics goes far beyond his earlier work. These pieces were written over a period of thirty years in which much changed: not only the shape of mathematical physics but also Weyl's own understanding of the role of mathematics in physical science and of how to approach the problem of matter, as well as his metaphysical sympathies."—Erhard W. Scholz, University of Wuppertal, Germany

"A very worthwhile volume."—Harold Kuhn, author of Lectures on the Theory of Games

"Weyl's writings are well worth reading, over and over again. This is a very nice volume."—Robert Gunning, Princeton University

"A great volume."—David Ruelle, author of The Mathematician's Brain