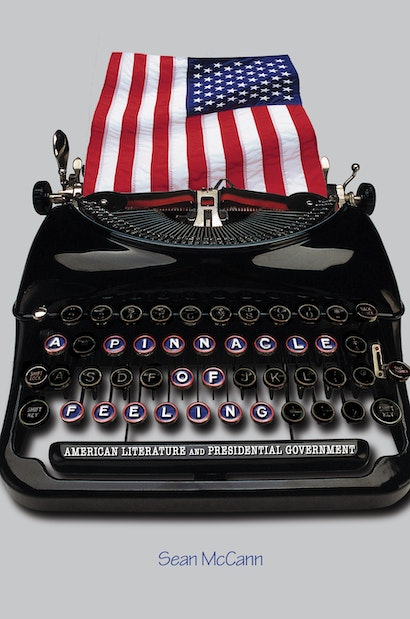 There is no more powerful symbol in American political life than the presidency, and the image of presidential power has had no less profound an impact on American fiction. A Pinnacle of Feeling is the first book to examine twentieth-century literature’s deep fascination with the modern presidency and with the ideas about the relationship between state power and democracy that underwrote the rise of presidential authority.


Sean McCann challenges prevailing critical interpretations through revelatory new readings of major writers, including Richard Wright, Gertrude Stein, Henry Roth, Zora Neale Hurston, Saul Bellow, Ralph Ellison, Norman Mailer, Don Delillo, and Philip Roth. He argues that these writers not only represented or satirized presidents, but echoed political thinkers who cast the chief executive as the agent of the sovereign will of the American people. They viewed the president as ideally a national redeemer, and they took that ideal as a model and rival for their own work.

A Pinnacle of Feeling illuminates the fundamental concern with democratic sovereignty that informs the most innovative literary works of the twentieth century, and shows how these works helped redefine and elevate the role of executive power in American culture.

Sean McCann is professor of English at Wesleyan University. He is the author of Gumshoe America: Hard-Boiled Crime Fiction and the Rise and Fall of New Deal Liberalism.

"McCann identifies how ambitions for the executive branch of the US government informed the 20th-century novel. . . . Few presidents appear as literary protagonists in their own right. Instead, their position serves as an ethical benchmark—whether as an authoritarian father figure, a career goal or even the target of an assassination attempt. If this symbolic use of public office threatens to rework the presidency as a chimerical, ghostly presence in the American novel, McCann carefully rebuilds these vague impressions to illustrate how authors reimagined the issue of popular sovereignty. His key argument gains momentum by describing how the ongoing debates over the boundaries of presidential government found close literary parallels. The arguments in political science monographs and middlebrow, social forecasting non-fiction are shown as the logical counterpart to imaginative representations of government institutions."—Graham Barnfield, Times Higher Education

"It is a tribute to McCann's superb book—one of the best I have read in the past five years—that his sharp description of the Republican project is a mere side-light, not central to his concerns or his thesis. McCann's scholarship, his knowledge of American history and the debates throughout that history about presidential power, his powers of exact description, and his probing analysis of the fundamental tensions in American democracy combine to make [other's] perfectly honorable books look rather pedestrian."—John McGowan, American Literary History

"This is one of the most significant books on the twentieth-century American novel published in recent memory. Exemplifying how literary criticism can illuminate the relationship of politics to literature, A Pinnacle of Feeling examines an impressive array of novels to tell a compelling story of the mutual transformation of the U.S. presidency and the concept of literary authorship over the course of the century."—Kenneth W. Warren, University of Chicago

"Sean McCann offers incisive ideological and aesthetic analyses of the ways that these authors wrestled with and within narrative forms and paradigms of literary production they understood in terms of the U.S. presidency. His articulation of the link between narrative and executive power is engaging and imaginative. There is no question that this will be an influential book."—Patricia E. Chu, University at Albany, State University of New York