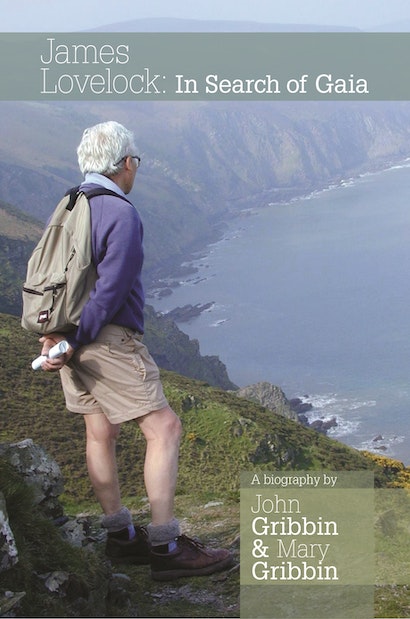 In 1972, when James Lovelock first proposed the Gaia hypothesis — the idea that the Earth is a living organism that maintains conditions suitable for life — he was ridiculed by the scientific establishment. Today Lovelock’s revolutionary insight, though still extremely controversial, is recognized as one of the most creative, provocative, and captivating scientific ideas of our time. James Lovelock tells for the first time the whole story of this maverick scientist’s life and how it served as a unique preparation for the idea of Gaia.

Drawing on in-depth interviews with Lovelock himself and unprecedented access to his private papers, John and Mary Gribbin paint an intimate and fascinating portrait of a restless, uniquely gifted freethinker. In a lifetime spanning almost a century, Lovelock has followed a career path that led him from chemistry, to medicine, to engineering, to space science. He worked for the British secret service and contributed to the success of the D-Day landings in World War II. He was a medical experimenter and an accomplished inventor. And he was working with NASA on methods for finding possible life on Mars when he struck upon the idea of Gaia, conceiving of the Earth as a vast, living, self-regulating system.

Deftly framed within the context of today’s mounting global-warming crisis, James Lovelock traces the intertwining trajectories of Lovelock’s life and the famous idea it brought forth, which continues to provoke passionate debate about the nature and future of life on our planet.

John Gribbin is the author of In Search of Schrödinger's Cat (Bantam) and Deep Simplicity (Random House), among other books. He is a visiting fellow in astronomy at the University of Sussex. Mary Gribbin has written many books with John Gribbin, including The Science of Philip Pullman's "His Dark Materials" (Knopf) and Richard Feynman: A Life in Science (Dutton).

"As we try to assess Lovelock's highly individualistic work and decide whether his message is worth listening to, there is not better guide than John and Mary Gribbin's James Lovelock: In Search of Gaia. Essentially a dual biography, it deftly recounts in alternating chapters the development of climate change theory and the life of Lovelock himself."—Tim Flannery, New York Review of Books

"This masterful but accessible take on the life and work of James Lovelock, inventor of the Gaia concept, is the work of seasoned science writers, married duo John and Mary Gribbin. Beginning with a history of Earth Systems Science, the Gribbins go on to chart the youth, education, rebellion and independent thinking of the man who would give birth to a new field of science. . . . The Gribbins provide an excellent breakdown of his work, showing his concepts in action. With complete access to Lovelock and his papers, the Gribbins avoid a laudatory treatise with a careful study of the scientist's mind and the evolution of a breakthrough."—PublishersWeekly.com

"John and Mary Gribbin lead us on an exploration of how Lovelock came to his perspective of Earth. . . . They offer valuable insights not only into how Lovelock came up with the idea for Gaia but more generally how his mind works and where the ideas for his scores of inventions come from."—Lee R. Kump, Science

"[A] new and highly readable biography . . . fascinating for what it reveals of the man himself."—Financial Times

"In their fascinating new biography, James Lovelock: In Search of Gaia, the science writers John and Mary Gribbin introduce us to a man who endorses this metaphor with much enthusiasm."—Michael Ruse, Chronicle of Higher Education

"[An] absorbing new biography . . . the Gribbins' enormous scientific knowledge and clarity of expression make equally comprehensible Lovelock's initial Gaian vision, and the frightening conclusion to which it has now led him."—Independent

"[O]ne of the great scientific biographies, featuring a brilliantly lucid account of the evolution of the Gaia theory."—Literary Review

"The Gribbins are the best science writers around. . . . [A]s a one-stop source on the life and works of one of the greatest figures of 20th-century thought, this book is unmissable."—Henry Gee, BBC Focus

"The Gribbins have written a friendly, affectionate account of Lovelock interspersed with a useful history of earth system science."—Roger Gathman, Austin American-Statesman

"Writers John Gribbin and Mary Gribbin present Lovelock's life story in a very open manner, blending the economic consequences of his life decisions with personal and scientific themes. They present a historical narrative of the development of the Gaia theory, but in doing so they achieve a far richer outcome—a clear understanding of the core elements of the Gaia theory itself."—Choice

"It is engaging, well researched, well written and accessible to non-specialists. Anyone who is interested in life on Earth, or in the achievements of a remarkable man who has done much to deepen our understanding of life, should read the Gribbins' homage to Lovelock. It is a delight."—William Grey, Australian Review of Public Affairs

"This carefully crafted book outlines the history of ideas on global change along with Lovelock's life and contributions. It is well written, accessible to educated readers with a general science background. . . . I recommend it highly."—R.F. Diffendal, Jr., Great Plains Research

"This book is an homage to Lovelock. The Gribbins have spent time with him, looked at his personal archives with him, and obviously the book is coming out of a deep admiration for his work. The biographical chapters are interspersed with science chapters, including a good one on the history of our understanding of the greenhouse effect, and others that cover Earth's biogeochemical cycles."—Tyler Volk, author of CO2 Rising

"James Lovelock is one of the great thinkers of our time. His ideas and inventions have opened up new insights into our planet and the way it works, and the story behind them will appeal to a very wide audience. I am pleased to recommend this book."—Chris Rapley, director of the Science Museum, London