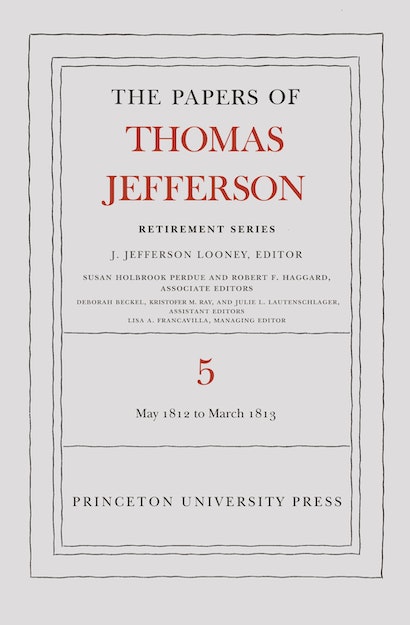 Volume Five of the definitive edition of Thomas Jefferson’s papers from the end of his presidency until his death includes 592 documents from 1 May 1812 to 10 March 1813. America declares war on Great Britain on 18 June 1812. Jefferson counsels domestic reconciliation while suggesting that America recruit British incendiaries to burn London if British ships attack American cities. He passes on to President James Madison a long and discouraging letter from Isaac A. Coles describing American military bungling in the Niagara Campaign. An unofficial proposal that Jefferson return to public life as secretary of state does not gain the retired statesman’s support. Jefferson receives many requests for governmental patronage, responds insightfully to a colorful assortment of authors and inventors, is mildly diverted by a fraudulent perpetual-motion machine, and spends considerable time on legal troubles. A dispute with David Michie over land in Albemarle County nearly leads to a duel between Michie and Jefferson’s agent. A conflict with Samuel Scott over property in Campbell County further vexes Jefferson, who prepares an extensively researched answer to Scott’s complaint. Despite the conflict, Jefferson graciously writes a letter of introduction for Scott’s son. Jefferson remains accessible to the public, receives anonymous letters urging him to convert to Christianity, and settles a wager for one correspondent who asks if Jefferson ever met the British king. Jefferson gloomily observes that “the hand of age is upon me” and complains that his faculties are failing. He still has thirteen years to live.