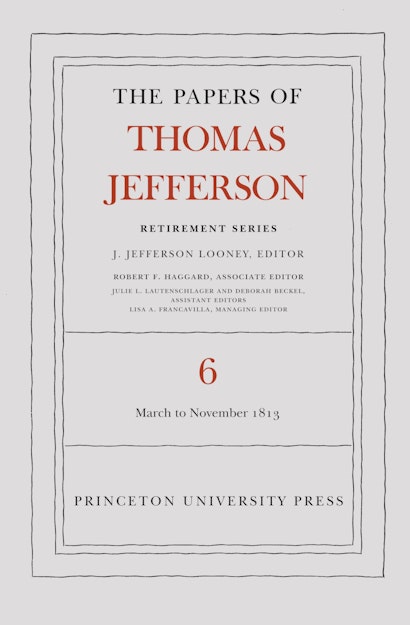 Volume Six of the definitive edition of Thomas Jefferson’s papers from the end of his presidency until his death presents 516 documents from 11 March to 27 November 1813. Although free from the cares of government, Jefferson cannot disassociate himself from politics entirely. He recommends to President James Madison during the War of 1812 that gunboats be used to protect the Chesapeake Bay, and writes to his congressional son-in-law, John Wayles Eppes, urging the repayment of the national debt and the reining in of the American banking system. Jefferson remains active and healthy, making trips to his beloved Poplar Forest estate, entertaining visitors at Monticello, and happily supervising the education of his grandchildren and other relations. His correspondence shows no signs of abating — he writes to John Waldo and John Wilson to discuss the improvement of English orthography, addresses Isaac McPherson as part of a plea for limits on government-sanctioned intellectual-property rights, and provides a study of Meriwether Lewis for Nicholas Biddle’s History of the Expedition under the command of Captains Lewis and Clark. Finally, this volume records the most intense period of correspondence between Jefferson and John Adams during their retirement. In an exchange of thirty-one letters, the two men reveal their hopes and fears for the nation.