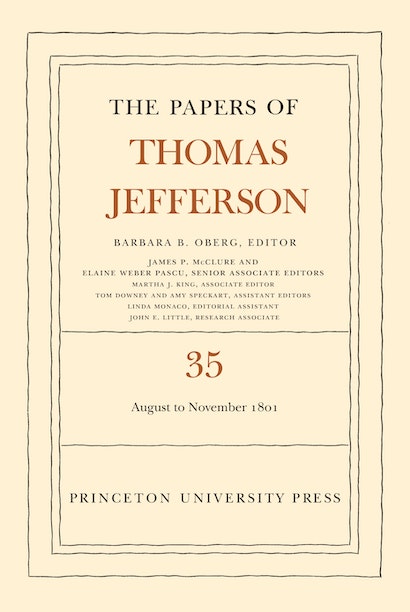 For the first two months covered by this volume, Thomas Jefferson is residing at Monticello, avoiding the “rather sickly” season in the nation’s capital. His mountaintop house finally has a roof and both daughters and their families come to stay with him. Using cowpox vaccine received from Benjamin Waterhouse, he undertakes what he calls “my experiment,” the systematic inoculation of family members and slaves against the smallpox.

In Washington, the construction of buildings for the nation’s capital moves forward. The walls of the chamber of the House of Representatives now extend “up to the window heads,” with only three feet more to go. Jefferson considers the erection of this chamber as well as completion of a “good gravel road” along Rock Creek as crucial for “ensuring the destinies of the city.” The interior decoration of the President’s House also progresses, with draperies, girandoles, and a chandelier furnishing the circular room. His carriage is ready to be shipped from Philadelphia.

As the city takes shape, so too do the operating principles of Jefferson’s administration. He dispatches a letter to his heads of department outlining “the mode & degrees of communication” for conducting their business. In mid-November, he enters a period of intense activity in the preparation of his first annual message to Congress, soliciting suggestions but personally drafting the document that he will submit in writing in early December.