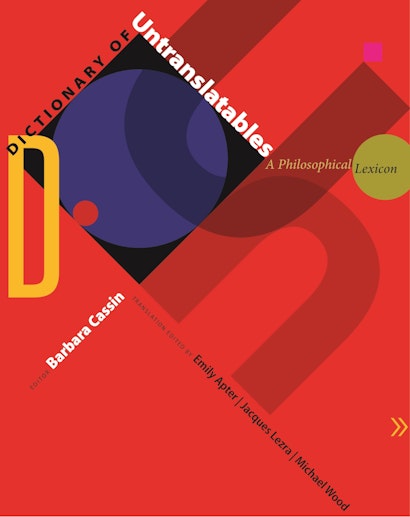 This is an encyclopedic dictionary of close to 400 important philosophical, literary, and political terms and concepts that defy easy—or any—translation from one language and culture to another. Drawn from more than a dozen languages, terms such as Dasein (German), pravda (Russian), saudade (Portuguese), and stato (Italian) are thoroughly examined in all their cross-linguistic and cross-cultural complexities. Spanning the classical, medieval, early modern, modern, and contemporary periods, these are terms that influence thinking across the humanities. The entries, written by more than 150 distinguished scholars, describe the origins and meanings of each term, the history and context of its usage, its translations into other languages, and its use in notable texts. The dictionary also includes essays on the special characteristics of particular languages—English, French, German, Greek, Italian, Portuguese, Russian, and Spanish.

"[W]hat may be the weirdest book the twenty-first century has so far produced. . . . [T]his is a considerable and entertaining book, full of odd words beautifully, at times owlishly, annotated."—Adam Gopnik, New Yorker

"[An] extraordinary book. . . . Many of the entries are illuminating, but what is most fascinating about the book is its partial vision of a fragment of European culture, through the dissection of its philosophical vocabulary."—Tim Crane, Times Literary Supplement

"[A] cornucopia of lexical trajectories and semantic adventures across a wide variety of languages and histories. . . . As for the achievement of Emily Apter, Jacques Lezra and Michael Wood in orchestrating the English edition, that qualifies as heroic . . . this book is another valuable reminder that a philosophy that ignores its own history, that pretends to operate as if it had no history, is self-impoverishing."—Christopher Prendergast, London Review of Books

"Praise for the French edition: "This dictionary's great idea is to address European philosophy from the point of view of translation. . . . [It] attains its goal by putting this principle to work: one cannot always translate a foreign concept in one word, but one can always explain it. And when one has grasped the explanation, one has acquired the concept.""—Le Figaro Littéraire

"Praise from the French edition: "A dictionary cannot be summarized. One great lesson, nevertheless, which can be distilled from this one (it can be gathered in the masterworks of the entries 'Traduire' ['Translate'] and 'Langues et traditions' ['Languages and traditions']), is that no language is born a philosophical one. It becomes philosophical, as it engages in exchanges with other languages. Philosophical language is impure language, and a national philosophy cannot, therefore, exist. This conviction can perhaps be one of the meanings of the unity of Europe, to which the Vocabulaire renders homage, and service.""—Vincent Aubin, Le Figaro

"[G]reat success. . . . By preserving the specificity of words in their source languages, but then proceeding though so many near-synonyms in other tongues, the Dictionary bridges this ideological divide, providing a different way of understanding what it is to be in, and between, languages."—Tom Bunstead, Independent on Sunday

"[Y]ou should equip yourself with this extraordinary book. . . . You could probably, and profitably, spend your life reading this book. . . . The volume offers a detailed and up-to-date map of abstract thinking, from the classical age to now."—Douglas Kerr, South China Morning Post

"The Dictionary of Untranslatables, newly translated from the French original, wears its modest megalomania well. An 11-year project involving some 150 contributors and comprising more than 400 entries, the Dictionary suggests comparison with Volume XI of the First Encyclopedia of Tlön, described by Borges as 'a vast and systemic fragment of the entire history of an unknown planet.' The planet in question here is what we usually call 'continental philosophy.'. . . [A] heady universe of speculative thinking about the meaning of life, the history of ideas, the fate of mankind, and so on. . . . [T]he Dictionary is revealing for the way it sketches, lexically, a set of parallel but alternate intellectual traditions. What language teachers call 'false friends' are everywhere, inspiring a constant alertness to nuance. . . . Scrupulous and difficult, it's everything that the Internet, which wants everything to talk 'frictionlessly' with everything else, is not. No dreams of universal translation here—enjoy the friction. Use it for bibliomancy, the lost art of divination by book (with scripture or Virgil or Homer or Hafiz)."—Ross Perlin, New Inquiry

"[This] is an invaluable reference for students, scholars, and general readers interested in the multilingual lives of some of our most influential words and ideas. . . . It has already provided me with several pleasurable evenings of educational reading adventures, and promises many more for the future. A superb gift for English-speaking writers, linguists, verbivores and linguaphiles."—GrrrlScientist

"The Dictionary demonstrates how much vitality and endurance these languages gain from the dialogue they engage in with other world languages—a dialogue structured and catalyzed by relations of power. . . . As the Dictionary of Untranslatables amply documents, the academy's effects on language are every bit as far-reaching as those of colonialism, trade, and pop culture. The etymologies here are at once precise and profligate, proliferating across terms like Abstraction and Acedia, Drive and Disegno, Erscheinung and Essence, Melancholy and Mimesis, Praxis and Pravda. . . . The struggle for clarity appears nowhere in ideal form but is always a thing unfolding in the world, a compound of ideology, politics, oppression, fear, desire—of all that is lost, and found, in translation."—Matthew Battles, Barnes and Noble Review

"[A]stonishingly successful . . . entertaining and revealing . . . strikingly complete and correct. . . . [A] fascinating book. . . . The translation of European 'philosophy' into American 'theory' has probably been the most consequential event in American intellectual life in the last fifty years, but it has entailed a great deal of 'mistranslation.'. . . The Dictionary of Untranslatables, in addition to its other pleasures, has a great deal to teach American scholars of the humanities about the depth and complexity of the languages and discourses we've picked up only recently—and a few powerful suggestions about what we may find waiting when we choose to turn back to our own."—Michael Kinnucan, Asymptote

"Dictionary of Untranslatables is a treasury of linguistic and philosophical paradoxes, both absorbing and diverting."—Alexander Adams, Spiked Review of Books

"Dictionary of Untranslatables is one of the most solid, wide-ranging, and remarkable books of our time. Very few will ever read it cover to cover, but anyone who dips into it with a little background in the philosophical tradition, and a desire to learn more about what life is actually about, will be rewarded many times over for the effort."—John Toren, Rain Taxi Review of Books

"All dictionaries are encyclopedias in disguise. But the Dictionary of Untranslatables is one of the most remarkably discursive works of reference I have encountered. . . . [T]his giant tome, edited by Barbara Cassin, is . . . a bonanza for anyone interested in the history of ideas—a kind of miniature Enlightenment."—Henry Hitchings, Wall Street Journal

"This astoundingly erudite work instantly asserts itself as one of the high points in European scholarship."—James W. Underhill, Translation Studies

"This is an essential volume for every university library."—Michel Petheram, Reference Reviews

"A remarkable achievement—truly a cause for wonder."—Matthew Walker, Slavic and East European Journal

"This is an absolutely astonishing book. There is really nothing else like it. Brimming with excited discovery on every page, it allows readers to re-experience all the freshness and energy of the original Enlightenment attempts to sum up knowledge. If other works of reference read like this, they'd give novels a run for their money. It is dazzling."—Bruce Robbins, Columbia University

Praise for the French edition:"[A] comparatist's bonanza. . . . [F]rom abstraction and phronesis to saudade and Wunsch, across hundreds of carefully researched lexical histories, this exceptionally rich and useful [book] also makes a forceful argument for doing philosophy in dialogue with other philosophical traditions, with their original languages and texts."—Christian Moraru, The Comparatist