A historical reevaluation of the relationship between Jews, miltary service, and war 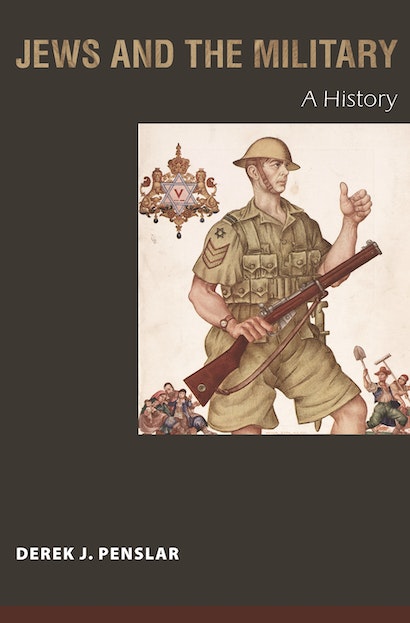 Jews and the Military is the first comprehensive and comparative look at Jews’ involvement in the military and their attitudes toward war from the 1600s until the creation of the state of Israel in 1948. Derek Penslar shows that although Jews have often been described as people who shun the army, in fact they have frequently been willing, even eager, to do military service, and only a minuscule minority have been pacifists. Penslar demonstrates that Israel’s military ethos did not emerge from a vacuum and that long before the state’s establishment, Jews had a vested interest in military affairs.

Spanning Europe, North America, and the Middle East, Penslar discusses the myths and realities of Jewish draft dodging, how Jews reacted to facing their coreligionists in battle, the careers of Jewish officers and their reception in the Jewish community, the effects of World War I on Jewish veterans, and Jewish participation in the Spanish Civil War and World War II. Penslar culminates with a study of Israel’s War of Independence as a Jewish world war, which drew on the military expertise and financial support of a mobilized, global Jewish community. He considers how military service was a central issue in debates about Jewish emancipation and a primary indicator of the position of Jews in any given society.

Deconstructing old stereotypes, Jews and the Military radically transforms our understanding of Jews’ historic relationship to war and military power.

Derek J. Penslar is the Samuel Zacks Professor of Jewish History at the University of Toronto and the Stanley Lewis Professor of Israel Studies at the University of Oxford. His many books include Shylock's Children: Economics and Jewish Identity in Modern Europe, Israel in History: The Jewish State in Comparative Perspective, and The Origins of Israel, 1882-1948: A Documentary History.

"Penslar offers a deep perspective . . . he enlivens his study with literary references and a wide-ranging history that offers revelations on nationalism, empire, and identity."—Anna Altman, New York Times Book Review

"This work of meticulous scholarship, based on sources in seven languages, sets out to correct deeply ingrained myths concerning Jews and military service. Drawing on evidence from the 17th century onward, Penslar puts to rest the common notions that Jews were wholly unsuited to be soldiers—too physically feeble, inherently cowardly, and disinterested to fight for the countries where they happened to be living. . . . This important book is balanced in its judgments and full of useful information."—Choice

"Penslar shows very effectively that there was a lot of middle ground between Jews of the Mosaic persuasion who disavowed any special connection with their foreign coreligionists and ardent Zionists who denied that the Jews could ever really belong to a nation other than their own. . . . Many [Jewish Historians] will no doubt be tantalized into pursuing the innumerable fascinating leads that Penslar provides."—Allan Arkush, Jewish Review of Books

"It is wide-ranging, in history and in the coverage of countries. . . . This is a very well-researched book, and the author has used publications in a number of languages."—Harold Pollins, Bulletin of the Military Historical Society

"Jews and the Military is a thoughtful and very readable study. . . . Penslar's work clearly demonstrates that the story of Jews in the military is not a case of all or nothing; the truth is somewhere in between."—Catherine D. Chatterley, American Historical Review

"Professor Penslar's book treats Jews and the military, perhaps for the first time, as a coherent subject of study rather than a series of individual conflicts. . . . To write a book on a single subject is challenge enough. To range across such a vast canvas of history and geography, through the prism of a coherent unity, is a remarkable achievement."—Jonathan Lewis, Jewish Historical Studies

"This book offers remarkably new ways of thinking about the relationship between Jews and the military beyond the context of modern Israel. It also weaves Jewish history, which is so often disconnected from scholarship on the predominantly Gentile countries in which the vast majority of the world's Jews lived for centuries, into larger historiographies in a way that makes the text stimulating reading for specialists in a variety of fields."—Christopher Tozzi, The Journal of Modern History

"Penslar's pioneering volume is certain to become a core work in the field."—David Rodman, Israel Affairs

"[A] groundbreaking book."—Sheldon Kirshner, The Times of Israel

"The book as a whole offers a radical reassessment of the Jewish diaspora's rich martial heritage. For the non-Jewish specialist or any military historian, there is much to learn here from its transnational approach, its sources, and its incisive analysis of conflicted loyalties, notably how they might be viewed by the state, the community, or the individual."—Mark Cornwall, Journal of Jewish Studies

"This book shatters the conventional image of diaspora Jews as a people who shun warfare. With exemplary scholarship and a gimlet eye for telling historical evidence, Derek Penslar analyzes Jewish participation in armies from the seventeenth century to the present. Wide-ranging in its scope, original in its argument, and elegant in its presentation, this is the work of a master historian at the peak of his powers."—Bernard Wasserstein, author of On the Eve: The Jews of Europe Before the Second World War

"Derek Penslar's Jews and the Military reminds us of the importance of great historians. It has been a common belief, especially in Israel, that diaspora Jews before the advent of political Zionism lacked the will to fight. Penslar shows us, in his astute and meticulous way, that Jews not only fought, but also had the courage to do so while struggling with hybrid, sometimes clashing identities. An illuminating book."—Bernard Avishai, author of Promiscuous: "Portnoy's Complaint" and Our Doomed Pursuit of Happiness

"By changing Jewish historical accounts of engagement in war from the passive to the active voice, Derek Penslar transforms our understanding of continuities between the history of the diaspora and the military culture of the Yishuv and the state of Israel. A strikingly original study, Penslar's book rearranges the scholarship of major facets of modern Jewish history."—Jay Winter, Yale University

"This book recovers the history of the Jewish soldier in the diaspora—from the seventeenth century to the middle of the twentieth century—and connects it to the early military history of the state of Israel. Combining a consummate command of the extant scholarship with sophisticated analysis, and encompassing a broad array of questions and sources, this is social and cultural history at its best. There is absolutely nothing else like it in any language."—David Sorkin, City University of New York, Graduate Center

"This book offers a new comparative history of state policy toward Jewish army service and rethinks modern Jewish political culture through the lens of military service. Demolishing the myth of diaspora Jewish pacifism, Penslar shows that attitudes toward soldiering and citizenship in Israeli political culture were anticipated in diaspora Jewish assimilationist and integrationist visions. Jewish historians, historians of modern Europe, and many others will want to read this book."—Kenneth B. Moss, Johns Hopkins University