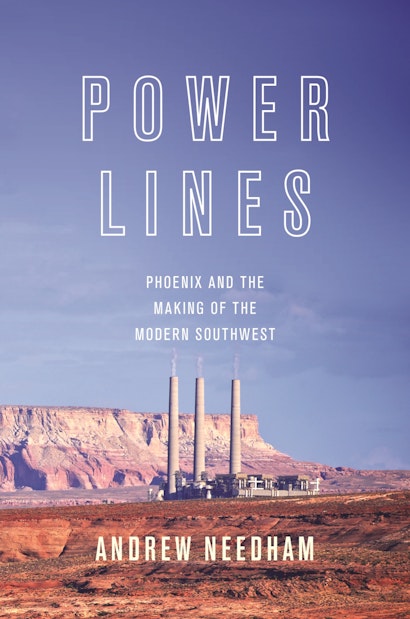 In 1940, Phoenix was a small, agricultural city of sixty-five thousand, and the Navajo Reservation was an open landscape of scattered sheepherders. Forty years later, Phoenix had blossomed into a metropolis of 1.5 million people and the territory of the Navajo Nation was home to two of the largest strip mines in the world. Five coal-burning power plants surrounded the reservation, generating electricity for export to Phoenix, Los Angeles, and other cities. Exploring the postwar developments of these two very different landscapes, Power Lines tells the story of the far-reaching environmental and social inequalities of metropolitan growth, and the roots of the contemporary coal-fueled climate change crisis.

Andrew Needham explains how inexpensive electricity became a requirement for modern life in Phoenix—driving assembly lines and cooling the oppressive heat. Navajo officials initially hoped energy development would improve their lands too, but as ash piles marked their landscape, air pollution filled the skies, and almost half of Navajo households remained without electricity, many Navajos came to view power lines as a sign of their subordination in the Southwest. Drawing together urban, environmental, and American Indian history, Needham demonstrates how power lines created unequal connections between distant landscapes and how environmental changes associated with suburbanization reached far beyond the metropolitan frontier. Needham also offers a new account of postwar inequality, arguing that residents of the metropolitan periphery suffered similar patterns of marginalization as those faced in America’s inner cities.

Telling how coal from Indian lands became the fuel of modernity in the Southwest, Power Lines explores the dramatic effects that this energy system has had on the people and environment of the region.

"Needham's disciplined focus on the mechanisms of power in the modern Southwest does much to clarify the origins of modern America—and to demonstrate the utter centrality of indigenous people to that story."—James Rice, AlterNative

"Needham's work is remarkable in its ability to draw together a range of actors, sites, scales, and technologies involved in the uneven development of not just Phoenix or the Navajo, but the entire Southwest. By making these connections visible, Power Lines is an important piece of scholarship for those interested in how energy, and electricity in particular, shapes the lives of people located in very different, yet connected, locations."—Conor Harrison, Planning Perspectives

"[A] tremendous accomplishment. By weaving together a swarm of previously disconnected histories and historiographies, Power Lines offers a bracing new perspective on energy, development, politics, and protest in the modern Southwest."—Thomas G. Andrews, Western Historical Quarterly

"A remarkably complex, sophisticated look at the causes and consequences of metropolitan growth in the American Southwest in the mid-twentieth century. . . . Power Lines achieves a very impressive, relatively concise synthesis of the expansion of the use of electricity in Phoenix in the mid-twentieth century while at the same time introducing original research."—Ben Ford, H-Net Reviews

"In showing how coal from Indian lands became the fuel propelling modernity in the Southwest, Power Lines explores the transformative effects this energy system has had on the people and environment of the region. . . . Students and historians of the West and the American environment, as well as the general reader, will all find intriguing material about the cultural, economic, and social effects of power generation in Southwest."—Robert E. Krause, Southwestern Historical Quarterly

"Power Lines incisively explores a central contradiction of the modern Southwest. . . . Needham brilliantly pushes beyond the boundaries of 'metropolitan space as the central battleground of American politics' to reveal the power lines, physical and metaphorical, racial and spatial, that subordinated the Navajo Nation to southwestern 'growth politics.'"—Thomas E. Sheridan, Pacific Historical Review

"Rarely does a work of history unite so many seemingly disconnected fields of inquiry in such new and exciting ways. Masterfully interweaving urban, Native American, and environmental history, Power Lines is a sobering assessment of Phoenix's expansive postwar development. The legacies of the region's coal-powered history continue to shape contemporary politics, spaces, and our shared environmental future, making Power Lines as timely as it is insightful."—Ned Blackhawk, Yale University

"What is the price of power? In modern America, the answer, as Needham reveals in this pioneering book, is heartbreaking. After reading Power Lines, one will never think about cities, Native Americans, or even the simple act of switching on the air conditioner the same way ever again."—Karl Jacoby, Columbia University

"Power Lines shakes up a field that I thought was unshakable. In this marvelous book, Needham captures the nature of modern suburbia within the framework of something that is at once obvious and invisible: electricity. From the coal dug up and burned on Navajo land to feed a million Phoenix air conditioners to the Colorado River's tempting gigawatts, which served as the Cold War's hidden fuel, Power Lines tells the indispensable history of the metropolitan Southwest."—Robert O. Self, Brown University

"Power Lines is a sweeping reassessment of how energy, political economy, and environmental transformation are at the core of regional development in the postwar United States. The story here is particular to Phoenix, but it has analogs elsewhere, from Los Angeles to New York City. A complex, ambitious, and dynamically rich book."—Matthew Klingle, author of Emerald City: An Environmental History of Seattle