Why the art historian's craft is a uniquely melancholy art 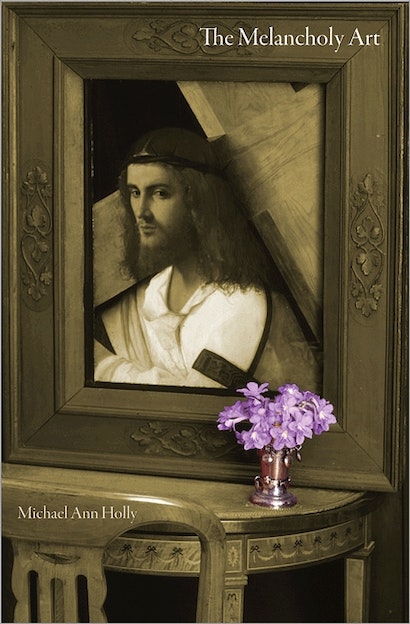 Melancholy is not only about sadness, despair, and loss. As Renaissance artists and philosophers acknowledged long ago, it can engender a certain kind of creativity born from a deep awareness of the mutability of life and the inevitable cycle of birth and death. Drawing on psychoanalysis, philosophy, and the intellectual history of the history of art, The Melancholy Art explores the unique connections between melancholy and the art historian’s craft.

Though the objects art historians study are materially present in our world, the worlds from which they come are forever lost to time. In this eloquent and inspiring book, Michael Ann Holly traces how this disjunction courses through the history of art and shows how it can give rise to melancholic sentiments in historians who write about art. She confronts pivotal and vexing questions in her discipline: Why do art historians write in the first place? What kinds of psychic exchanges occur between art objects and those who write about them? What institutional and personal needs does art history serve? What is lost in historical writing about art?

The Melancholy Art looks at how melancholy suffuses the work of some of the twentieth century’s most powerful and poetic writers on the history of art, including Alois Riegl, Franz Wickhoff, Adrian Stokes, Michael Baxandall, Meyer Schapiro, and Jacques Derrida. A disarmingly personal meditation by one of our most distinguished art historians, this book explains why to write about art is to share in a kind of intertwined pleasure and loss that is the very essence of melancholy.

Michael Ann Holly is the Starr Director of the Research and Academic Program at the Clark Art Institute and teaches in the Graduate Program in the History of Art at Williams College. Her books include Past Looking: Historical Imagination and the Rhetoric of the Image and Panofsky and the Foundations of Art History.

"Nostalgic and plaintive, this title's examination of the work of art historians is an enjoyable literary exercise that will foster discussion among art historians and their students."—Library Journal

"To consider melancholy in art beyond the limits of despondency, loss, and grief is a refreshing way to induce a different space and energy between the past of the artwork and the viewer's present. In these erudite essays, art historian Michael Ann Holly makes case for works of art—'these beautiful orphans'—that reinvest in melancholia as the signifier and the signified."—Greta Aart, Cerise Press

"In support of her argument, Holly marshals a wealth of erudition indicative of formidable trans-historical, interdisciplinary expertise. . . . With the utmost refinement, Holly's own poetic resonance echoes from artful analogy and suggestive imagery."—Giovanna Costantini, Leonardo Reviews

"While the driving power of melancholy remains unclear, many readers will be intrigued by this highly personal take on the profession."—Choice

"Holly's elegant and thoughtful book focuses on the encounter of the viewer with the work of art."—Kathryn Murphy, Apollo Magazine

"The Melancholy Art is both an apt embodiment of contemporary disciplinary conundrums and a deeply moving account of one art historian's personal attempt to reckon with the impossibility - the futility - of ‘closing the gap between words and images.'. . . Holly clearly exemplifies both senses of the term in this memorable and indeed rather haunting text. . . . The value of The Melancholy Art is precisely in simultaneously manifesting such a conundrum and in refusing to fall into the fundamentalist trap of either attributing or denying real agency to artworks. All our ‘art history' books should be so brave."—Donald Preziosi, CAA Reviews

"In this unabashedly romantic book, Holly addresses the melancholy that she suggests always accompanies art historians in their research. Erudite and illuminating, The Melancholy Art contributes to a lively contemporary debate about the 'presence' of past arts in our lives and about the appropriate distance that scholars can or should try to attain in relation to it."—Whitney Davis, University of California, Berkeley

"It is about time someone wrote a book like this, one that calls attention to what's so little talked about: namely, the sadness of the art historian's task. Puzzling over the contemporary state of scholarship about art, Holly's meditation is wise, gentle, and erudite. It is good that a voice so well-respected, measured, and yet earnestly plaintive should be the one to speak to us about what we've mostly forsaken or forgotten."—Alexander Nemerov, author of Wartime Kiss: Visions of the Moment in the 1940s

"This superbly written book is a fluid exploration of an undertow of melancholy within art history. Probably the most insistent form of its central question is simply, 'Why do we write about works of art?' Holly is surely right that it is a question art history has little current habit of asking, and that nonetheless must be central to the discipline."—Stephen Melville, coauthor of Writing Art History