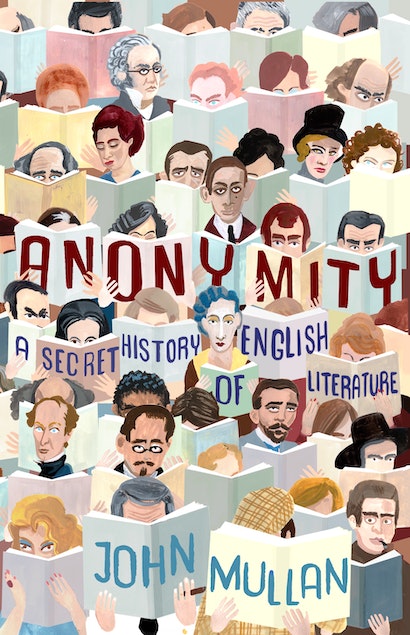 Some of the greatest works in English literature were first published without their authors’ names. Why did so many authors want to be anonymous — and what was it like to read their books without knowing for certain who had written them? In Anonymity, John Mullan gives a fascinating and original history of hidden identity in English literature. From the sixteenth century to today, he explores how the disguises of writers were first used and eventually penetrated, how anonymity teased readers and bamboozled critics — and how, when book reviews were also anonymous, reviewers played tricks of their own in return.


Today we have forgotten that the first readers of Gulliver’s Travels and Sense and Sensibility had to guess who their authors might be, and that writers like Sir Walter Scott and Charlotte Brontë went to elaborate lengths to keep secret their authorship of the best-selling books of their times. But, in fact, anonymity is everywhere in English literature. Spenser, Donne, Marvell, Defoe, Swift, Fanny Burney, Austen, Byron, Thackeray, Lewis Carroll, Tennyson, George Eliot, Sylvia Plath, and Doris Lessing — all hid their names. With great lucidity and wit, Anonymity tells the stories of these and many other writers, providing a fast-paced, entertaining, and informative tour through the history of English literature.

John Mullan is professor of English at University College London and the author of How Novels Work. A broadcaster and journalist as well as an academic, he has been described as having "a scholar's knowledge worn with a journalist's lightness of touch." He writes a weekly column on contemporary fiction for the Guardian newspaper.

"[Mullan] has written an excellent book—in essence, a series of case histories of anonymous or pseudonymous publication. . . . Some of the cases involve major works, others curious minor ones. All of them are recounted with crisp good sense and a lively eye for anecdotal detail."—John Gross, Wall Street Journal

"[Mullan] performs some shrewd literary criticism on the writings (some obscure, others less so) that fall within the intelligently concocted parameters of his study, and addresses the common reader with none of the rhodomontade associated with learning."—Pat Leslie, Sunday Telegraph

"[Mullan] has . . . filled a major gap in literary history with this comprehensive survey of the phenomenon. . . . . [A] thoroughly useful survey of the form."—David Sexton, Evening Standard

"[T]horoughly-researched examples reveal Mullan's keen eye for detail and his mastery at dissecting and interpreting text. Through close reading, both of the authors' novels and correspondences, Anonymity offers startling insight into the lives and psychological workings of the writers profiled. Given the academic nature of Mullan's material, he still manages to ground his literary scholarship in a relatively accessible tone. . . . John Mullan's book, then, rescues the authors from anonymity by giving readers their life's story, their reasons for concealment. This, I think, is the true treasure in Mullan's book."—Manning Ding, Harvard Crimson

"Mullan's book convincingly demonstrates that anonymity (or pseudonymity) is a counterintuitively successful method of self-promotion."—Toronto Star

"Not at all the dusty tome one might expect from an academic. The verdict: I couldn't put it down."—John Mark Eberhart, Myrtle Beach Online

"Mullan shows how literary anonymity excites its opposite—curiosity, controversy, conflict, and notoriety. Anonymity is accessible, thorough, and interesting."—Sophie Gee, author of The Scandal of the Season: A Novel

"A great book. Mullan's historical reach and subtle eye equip him to write a witty, and incisive, biography of Anonymous."—Nicholas Dames, Columbia University