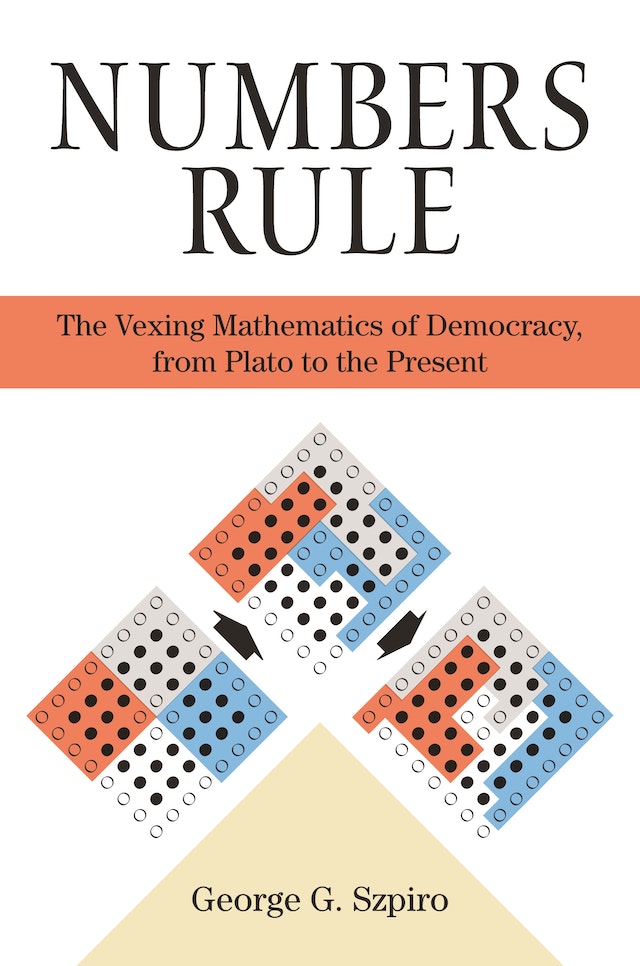 Since the very birth of democracy in ancient Greece, the simple act of voting has given rise to mathematical paradoxes that have puzzled some of the greatest philosophers, statesmen, and mathematicians. Numbers Rule traces the epic quest by these thinkers to create a more perfect democracy and adapt to the ever-changing demands that each new generation places on our democratic institutions.

In a sweeping narrative that combines history, biography, and mathematics, George Szpiro details the fascinating lives and big ideas of great minds such as Plato, Pliny the Younger, Ramon Llull, Pierre Simon Laplace, Thomas Jefferson, Alexander Hamilton, John von Neumann, and Kenneth Arrow, among many others. Each chapter in this riveting book tells the story of one or more of these visionaries and the problem they sought to overcome, like the Marquis de Condorcet, the eighteenth-century French nobleman who demonstrated that a majority vote in an election might not necessarily result in a clear winner. Szpiro takes readers from ancient Greece and Rome to medieval Europe, from the founding of the American republic and the French Revolution to today’s high-stakes elective politics. He explains how mathematical paradoxes and enigmas can crop up in virtually any voting arena, from electing a class president, a pope, or prime minister to the apportionment of seats in Congress.

Numbers Rule describes the trials and triumphs of the thinkers down through the ages who have dared the odds in pursuit of a just and equitable democracy.

George G. Szpiro, PhD, is a mathematician and journalist. He covers Israel and the Middle East for the Swiss daily newspaper Neue Zürcher Zeitung, for which he also writes an award-winning monthly column on mathematics. His books include Poincaré's Prize: The Hundred-Year Quest to Solve One of Math's Greatest Puzzles (Dutton).

"Mathematicians, economists, and political theorists have made their own attempts to elucidate the math of voting, and figure out better electoral systems. The story of these efforts is told in Numbers Rule. . . . Timely."—Anthony Gottlieb, New Yorker

"Clear and energetic. . . Szpiro charts this history selectively and with the use of major characters to render vivid a story of rival systems, which can easily degenerate into equations. He is a mathematician and uses tables to illustrate his arguments: but these are accessible to simple understanding. He is also a journalist and thus can tell a story."—John Lloyd, Financial Times

"A history of social choice theory, with much more detail (yet still readable) than one is used to receiving on this topic. I liked this book very much."—Tyler Cowen, Marginal Revolution

"I knew from reading Martin Gardner's columns that every voting system you can devise will occasionally turn up paradoxical results. . . . Szpiro walks you through the whole subject with very few equations."—John Derbyshire, National Review

"Engaging storytelling . . . for a reader who is primarily interested in learning some of the historical context of the characters who have contributed to the mathematics of social choice theory, it is hard to imagine a better book."—Darren Glass, MAA Reviews

"In Numbers Rule, mathematician and journalist Szpiro presents a refreshingly different presentation of the mathematics of voting and apportionment. . . . The mathematical content is not trivial, and it is well written, very clear, and should be accessible to readers with an understanding of arithmetic and a willingness to play with numbers."—Choice

"Highly entertaining. . . . Anybody who has ever decried election results will be fascinated in Szpiro's accessible explanations of the paradoxes and enigmas that occur in all methods of election, from electing a pope in Rome, to apportionment of seats in the Congress by our founding fathers to ensure justice for all, even the minority."—Phil Semler, Sacramento Book Review>

"The author skillfully placed the development and evolution of the Social Choice theories in a broad historical context. The book shines in weaving the emergent math theories with historical circumstances. . . . [E]njoyable and informative."—Alexander Bogomolny, Cut the Knot

"Szpiro's book is a highly recommended good read on the history of the problems, which could illuminate a seminar series on the issues."—Ron Johnston, Environment and Planning

"It is an excellent addition to a growing body of literature that aims to convey ideas from the mathematical sciences to general audiences. Moreover, Szpiro's book is unique among other offerings in the mathematical social sciences in that it focuses on the historical development of the field. The narrative is engaging, witty, and easy to read."—Jonathan K. Hodge, Notices of the AMS

"George Szpiro's Numbers Rule does not break any new ground in the field of social choice theory, but it is probably the most entertaining book one is likely to find on the subject. . . . [A]ll social choice theorists should read this book. . . .Szpiro's book is ideally suited to be a supplementary reading for graduate classes in social choice theory."—Justin Buchler, Public Choice

"'Which candidate is the people's choice?' It's a simple question, and the answer is anything but. In Numbers Rule, George Szpiro tells the amazing story of the search for the fairest way of voting, deftly blending history, biography, and political skullduggery. Everyone interested in our too-fallible elections should read this book."—William Poundstone, author of Gaming the Vote: Why Elections Aren't Fair (and What We Can Do about It)

"Writing a book for a general audience on voting and electoral systems is a daunting task, but Szpiro succeeds admirably. He completely avoids technical jargon and focuses on the most important scholars and results in the field. This book fills a gap in the existing literature."—Hannu Nurmi, author of Voting Procedures under Uncertainty

"Numbers Rule focuses on key figures in the development of democracy and on the mathematics of voting, elections, and apportionment that they developed. Szpiro pays particular attention to the paradoxes that arise, and discusses them through examples."—Steven J. Brams, New York University

"Numbers Rule is very thoroughly researched and quite well written. The story Szpiro tells is both important and interesting. The most significant contribution this book makes is in the detailed history that it presents. It will have broad appeal."—Alan D. Taylor, coauthor of Mathematics and Politics