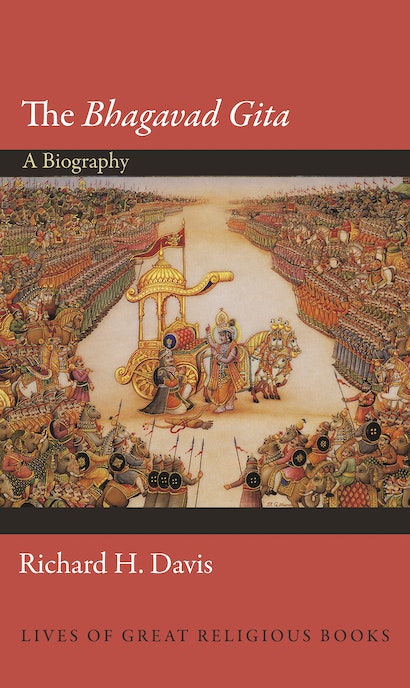 The Bhagavad Gita, perhaps the most famous of all Indian scriptures, is universally regarded as one of the world’s spiritual and literary masterpieces. Richard Davis tells the story of this venerable and enduring book, from its origins in ancient India to its reception today as a spiritual classic that has been translated into more than seventy-five languages. The Gita opens on the eve of a mighty battle, when the warrior Arjuna is overwhelmed by despair and refuses to fight. He turns to his charioteer, Krishna, who counsels him on why he must. In the dialogue that follows, Arjuna comes to realize that the true battle is for his own soul.

Davis highlights the place of this legendary dialogue in classical Indian culture, and then examines how it has lived on in diverse settings and contexts. He looks at the medieval devotional traditions surrounding the divine character of Krishna and traces how the Gita traveled from India to the West, where it found admirers in such figures as Ralph Waldo Emerson, Henry David Thoreau, J. Robert Oppenheimer, and Aldous Huxley. Davis explores how Indian nationalists like Mahatma Gandhi and Swami Vivekananda used the Gita in their fight against colonial rule, and how contemporary interpreters reanimate and perform this classical work for audiences today.

An essential biography of a timeless masterpiece, this book is an ideal introduction to the Gita and its insights into the struggle for self-mastery that we all must wage.

Richard H. Davis is professor of religion at Bard College. He is the author of Lives of Indian Images and Ritual in an Oscillating Universe: Worshipping Siva in Medieval India (both Princeton).

"In his masterful new biography of the Gita—part of an excellent Princeton series dedicated to the lives of great religious books—Richard Davis, a professor of religion at Bard College, shows us, in subtle and stunning detail, how the text of the Gita has been embedded in one political setting after another, changing its meaning again and again over the centuries."—Wendy Doniger, New York Review of Books

"In the 21st century, The Gita continues to thrive. India's present Prime Minister, Narendra Modi, gives it out as a gift on his trips abroad. Discourses on The Gita by spiritual leaders are a part of the cultural life of every major Indian city. Some Indians disagree with its vision of ethics or consider it a relic of the past; but even they, too, must engage with it closely in order to refute it. Mr. Davis's book is an ideal introduction to the text, showing how the meanings of a book reside not just in its words but its life in history."—Chandrahas Choudhury, Wall Street Journal

"Like all the great religious books featured in this superb series from Princeton University Press, the Gita has transcended the circumstances of its birth. Rival schools of Hindu theology have risen from various turns of Krishna's phrases, while Westerners have seen echoes of their own traditions. In modern India, Gandhi thought the Gita reflected the eternal battle between light and dark in every human heart, and in the drive for Indian independence, even secular nationalists championed it as a patriotic text. The Gita and the moral issues it raises are still alive."—Brian Bethune, Macleans

"In The Bhagavad Gita: A Biography, the latest in the series Lives of Great Religious Books, Davis crisply summarizes this oft-quoted Hindu scripture, in which Krishna reveals his true identity as the 'imperishable Lord of All Beings.'"—Donna Seaman, Booklist

"The Gita is one of the oldest and most fascinating texts ever written, and I love how its 'biography' comes to life in this new book. It's a living, breathing text that has constantly been in motion since its origin. . . . I should mention this book is part of a new series (Lives of Great Religious Books) published by Princeton University Press. Next on my reading list are the biographies of The Tibetan Book of the Dead and Augustine's Confessions."—April Peavey, WGBH

"Davis deftly traces the many reincarnations of this 700-verse poem over the past two millennia, both in India and in the West."—Fiona Capp, Sydney Morning Herald

"[The Bhagavad Gita: A Biography] appears in the worthy ‘Lives of Great Religious Books' series, which takes a novel approach to ‘great books.' Davis's execution of this approach is superb . . . Davis neatly organizes a great deal of material and he presents it in utterly accessible prose. This is an easy read - and a great one too."—Choice

"Davis . . . provides a comprehensive, detailed and lucid account of the ways that the Gita has lived over the centuries."—Cover Drive

"A comprehensive, detailed and lucid account of the ways that the Gita has lived over the centuries."—Sudhirendar Sharma, Speaking Tree

"This is a fascinating work; so much is packed in its 243 pages. Being thoroughly researched and documented this serves as a primer on Gita. And also a template for those who would like to study the impact of religious texts on the life and history of human race."—Paulson Pulikottil, Academia

"So much in 243 small pages! Like the Sacred Books of the East in the nineteenth century, the Princeton series offers a fresh canon of global stature; thanks to Davis's superb retelling of the history of this powerful, influential, living classic, the Gita has its honoured place on that shelf."—Francis X. Clooney, Religions of South Asia

"A highly enjoyable volume that will be of interest to a large educated audience, to religious specialists, and to historians of modern and colonial India, among others. . . . This volume will undoubtedly and quickly become a classic introduction to the Bhagavad-Gītā, or even more generally to classes on Hinduism."—Pierre-Julien Harter, Journal of Religion

"This ‘biography’ is short, affordable, and written with a remarkable clarity and straight forwardness that makes it a must have for all scholars of Hinduism and a definite consideration for inclusion in any course that broaches the Gita."—Steven E. Lindquist, Religious Studies Review

"This is an exciting book about an exciting book, namely, the Bhagavad Gita, a text in which Hinduism comes closest to possessing a universal scripture. Davis traces the varying course of its semantic trajectory through history with erudite clarity. A must-read for anyone interested in the Gita."—Arvind Sharma, author of Gandhi: A Spiritual Biography

"No work of traditional India needs a biography more than the Bhagavad Gita, for no text has had a more complicated life, from its birth in the epic world of the Mahabharata to its maturity in Indian modernity. Reading intelligently depends in part on knowing how others in the past have read, and for the Gita's past, Richard Davis has provided the best guidance available."—Sheldon Pollock, Arvind Raghunathan Professor of Sanskrit and South Asian Studies, Columbia University

"This superb and beautifully written book represents a substantial contribution to the field, and will become a first-tier resource for anyone interested in the subject. Davis's authoritative voice is a dependable guide throughout. I cannot imagine this book being done better by anyone else."—John Stratton Hawley, author of Three Bhakti Voices: Mirabai, Surdas, and Kabir in Their Times and Ours

"I thoroughly enjoyed reading this biography of the Bhagavad Gita. Its uniqueness rests in its breadth and historical scope—each chapter opens new contexts and perspectives. Davis is a careful scholar who writes clear, straightforward prose, remarkably free of jargon."—Diana L. Eck, author of India: A Sacred Geography

"Davis examines the Gita in its own time, in medieval and modern India, in its travels to Europe and America, and beyond—in other words, he presents the long view of this book's life. He is very learned and smart, and writes with a minimum of scholarly jargon, in a very accessible and interesting way."—Thomas R. Trautmann, author of India: Brief History of a Civilization