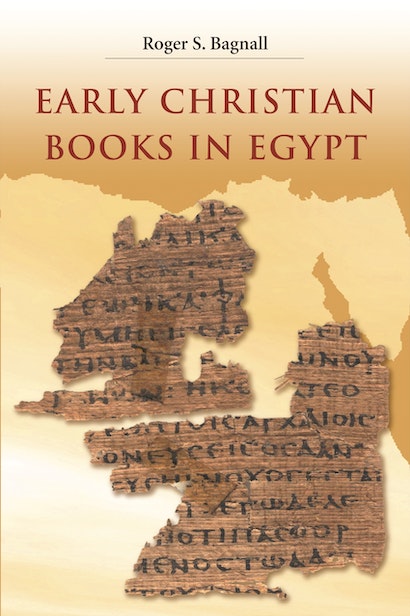 For the past hundred years, much has been written about the early editions of Christian texts discovered in the region that was once Roman Egypt. Scholars have cited these papyrus manuscripts — containing the Bible and other Christian works — as evidence of Christianity’s presence in that historic area during the first three centuries AD. In Early Christian Books in Egypt, distinguished papyrologist Roger Bagnall shows that a great deal of this discussion and scholarship has been misdirected, biased, and at odds with the realities of the ancient world. Providing a detailed picture of the social, economic, and intellectual climate in which these manuscripts were written and circulated, he reveals that the number of Christian books from this period is likely fewer than previously believed.

Bagnall explains why papyrus manuscripts have routinely been dated too early, how the role of Christians in the history of the codex has been misrepresented, and how the place of books in ancient society has been misunderstood. The author offers a realistic reappraisal of the number of Christians in Egypt during early Christianity, and provides a thorough picture of the economics of book production during the period in order to determine the number of Christian papyri likely to have existed. Supporting a more conservative approach to dating surviving papyri, Bagnall examines the dramatic consequences of these findings for the historical understanding of the Christian church in Egypt.

Roger S. Bagnall is professor of ancient history and director of the Institute for the Study of the Ancient World at New York University. His books include Egypt in Late Antiquity (Princeton).

"This book was well written, intelligent and cleverly argued; I can see it becoming the 'instant and major classic in the field' that its back cover predicts."—Charlotte Booth, Heritage Key

"This book confirms that not many, if any, know more about this subject than Roger Bagnall. . . . Overall, it is an extremely useful book, which should press scholars to greater precision dating NT papyri in the future. . . . [T]his superb book is a must-read for anyone interested in the matters upon which it touches."—Simon J. Gathercole, Journal for the Study of the New Testament

"This is a provocative and informative book that deserves detailed interaction and wide consideration of the ideas it advances."—Paul Foster, Journal of Biblical Textual Criticism

"This very informative volume offers, by all means, anything but a tedious read. The reader is urged to question the interference of non-academic criteria and agendas into the issue of dating the earliest Christian papyri, as well as in our general understanding of their testimony for those centuries. All in all, this surely is an unavoidable read for any scholar working on Early Christianity with an interest in the early Christian manuscripts."—Dan Batovici, Sacra Scripta

"This book is brilliant, concise, and elegantly written. Bagnall provides a masterful and readable study, while also addressing a number of controversies in early Christian studies. The book will be an instant and major classic in the field—it is that good."—T. G. Wilfong, University of Michigan

"Written by one of the world's leading papyrologists, this book is full of valuable and interesting information that will help to advance the discussion of a hot topic."—Robert Kraft, University of Pennsylvania