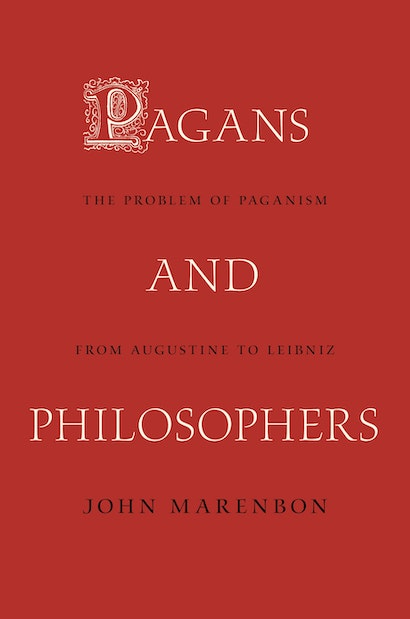 From the turn of the fifth century to the beginning of the eighteenth, Christian writers were fascinated and troubled by the “Problem of Paganism,” which this book identifies and examines for the first time. How could the wisdom and virtue of the great thinkers of antiquity be reconciled with the fact that they were pagans and, many thought, damned? Related questions were raised by encounters with contemporary pagans in northern Europe, Mongolia, and, later, America and China.

Pagans and Philosophers explores how writers—philosophers and theologians, but also poets such as Dante, Chaucer, and Langland, and travelers such as Las Casas and Ricci—tackled the Problem of Paganism. Augustine and Boethius set its terms, while Peter Abelard and John of Salisbury were important early advocates of pagan wisdom and virtue. University theologians such as Aquinas, Scotus, Ockham, and Bradwardine, and later thinkers such as Ficino, Valla, More, Bayle, and Leibniz, explored the difficulty in depth. Meanwhile, Albert the Great inspired Boethius of Dacia and others to create a relativist conception of scientific knowledge that allowed Christian teachers to remain faithful Aristotelians. At the same time, early anthropologists such as John of Piano Carpini, John Mandeville, and Montaigne developed other sorts of relativism in response to the issue.

A sweeping and original account of an important but neglected chapter in Western intellectual history, Pagans and Philosophers provides a new perspective on nothing less than the entire period between the classical and the modern world.

John Marenbon is a senior research fellow at Trinity College, University of Cambridge, honorary professor of medieval philosophy at Cambridge, and a fellow of the British Academy. He is the author and editor of many books, including Abelard in Four Dimensions, The Oxford Handbook of Medieval Philosophy, The Cambridge Companion to Boethius, and Medieval Philosophy: An Historical and Philosophical Introduction.

"This reviewer has been waiting for this book for a long time. . . . [Pagans and Philosophers] is fascinating, exciting, compelling, and well worth the wait."—Choice

"Overall this is a magnificent study in the history of ideas, executed with great lucidity and exemplary scholarship."—John Cottingham, The Tablet

"In this book, John Marenbon exhibits remarkable erudition and a formidable command of the relevant texts, both scholastic and literary. He is adept at setting out complex issues in a clear way, and his book incorporates much little-known and fascinating material in the history of ideas."—Anthony Kenny, author of A New History of Western Philosophy

"With this book, Marenbon creates rather than contributes to a field, framing the problem of paganism in a new way for medievalists and early modern specialists in particular. It is not a historical study of the gradual development of the notion of paganism in late antiquity, but an overview of the patterns in which medieval and early modern thinkers interpreted and responded to the notion for themselves. Few scholars write with such elegance; the style is uncluttered, clear, and fast-paced, keeping the bigger picture in view throughout."—John Magee, University of Toronto