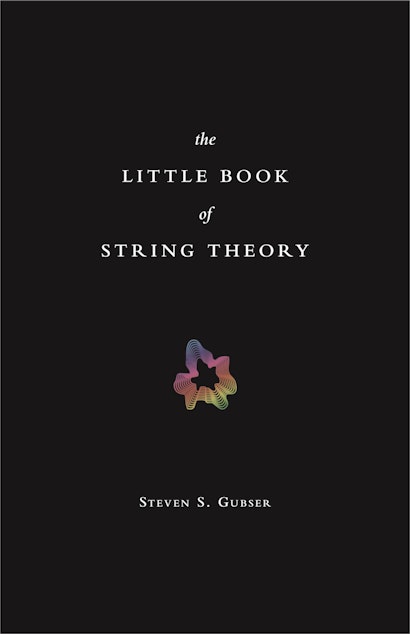 The Little Book of String Theory offers a short, accessible, and entertaining introduction to one of the most talked-about areas of physics today. String theory has been called the “theory of everything.” It seeks to describe all the fundamental forces of nature. It encompasses gravity and quantum mechanics in one unifying theory. But it is unproven and fraught with controversy. After reading this book, you’ll be able to draw your own conclusions about string theory.

Steve Gubser begins by explaining Einstein’s famous equation E = mc2, quantum mechanics, and black holes. He then gives readers a crash course in string theory and the core ideas behind it. In plain English and with a minimum of mathematics, Gubser covers strings, branes, string dualities, extra dimensions, curved spacetime, quantum fluctuations, symmetry, and supersymmetry. He describes efforts to link string theory to experimental physics and uses analogies that nonscientists can understand. How does Chopin’s Fantasie-Impromptu relate to quantum mechanics? What would it be like to fall into a black hole? Why is dancing a waltz similar to contemplating a string duality? Find out in the pages of this book.

The Little Book of String Theory is the essential, most up-to-date beginner’s guide to this elegant, multidimensional field of physics.

Steven S. Gubser (1972–2019) was professor of physics at Princeton University.

"The Little Book of String Theory by theoretical physicist Steven Gubser puts into words the abstract maths of some of the most challenging areas of physics, from energy and quantum mechanics to branes, supersymmetry and multiple dimensions."—Nature

"Princeton theoretical physicist Steven S. Gubser opens The Little Book of String Theory with a simple—and highly accurate—sentence: 'String theory is a mystery.' You won't get very far into this excellent book before you'll be agreeing with him completely."—Washington Post

"Gubser does a masterly job of introducing string theory in simple terms and without using math. His goal is not to convert people to the cause but to help them better understand the ideas. Cars on a freeway, the vibration of piano strings, and buoys in the ocean are among the examples from everyday life used to explain difficult concepts. This concise yet clear introduction to a conceptually difficult topic is recommended for lay readers in physics and for popular science collections."—Library Journal

"This is an excellent introduction to string theory for those who are looking for a highly academic explanation. . . . For those new to string theory, this book is full of information and humor and will help readers see the universe in an entirely new way."—ForeWord

"You will probably finish the book more confused than when you started, but in the best possible way: with profound questions and a desire to learn more."—New Scientist

"What sets this book apart is that it has been written by one of the foremost experts on the subject. Many of the analogies from everyday life used to explain concepts from string theory are both original and very communicative. . . . I would recommend The Little Book of String Theory even to seasoned researchers in the field. This is a thought-provoking book. With explanations offered in simple words, imagination can fly faster and perhaps lead to new and unexplored areas in the quest for the fundamental theory."—Times Higher Education

"The Little Book of String Theory succeeds in its mission to carry readers through the tangle of ideas to the intellectual loose ends that physicists love."—Fred Bortz, Philadelphia Inquirer

"But how do we non-mathematicians sort frayed ends from tight theory? Read Steven S. Gubser's book. It's clear, concise, turns formulas into words and leaves readers informed, if still incredulous, at the ability of great minds to imagine the unimaginable."—Leigh Dayton, Australian

"There is much in this book I did not understand, but I've seen plenty of popular physics books over the last few years. This is the first one in a long time that I both wanted to read and finished; it's full of fresh material."—Tyler Cowen, Marginal Revolution blog

"With Gubser as our guide science starts to seem less like the exclusive domain of the brainy, and more like a window into the universe that is open for everyone."—Glenn Dallas, San Francisco Book Review

"[T]his book is a concise survey of advanced ideas in particle physics and string theory. But it is also true that every single concept is explained in a very simple and accurate way. This makes the book, while without errors from a physicist's point of view, accessible to a wide range of readers."—Farhang Loran, Mathematical Reviews

"This is an engaging and concise introduction to the main ideas in string theory. Gubser gives us a quick tour of the basic laws of physics as we understand them today, and then demonstrates how string theory seeks to go beyond them. He serves as an artful and attentive guide, as the reader explores the mysteries of quantum mechanics, black holes, strings, branes, supersymmetry, and extra dimensions in the pages of this book."—Juan Maldacena, Institute for Advanced Study

"Steve Gubser has written an engaging and thought-provoking account of what was achieved in physics in the last century and how physicists are seeking to go farther in the ambitious framework known as string theory. This is one of the most thoughtful books on this much-discussed topic, and readers will find much to ponder."—Edward Witten, Institute for Advanced Study

"This book offers a very nice short introduction to some of the basic ideas and implications of string theory. Gubser knows his subject."—John H. Schwarz, coauthor of Special Relativity: From Einstein to Strings