The first major biography of the 1972 U.S. presidential candidate and unsung champion of American liberalism 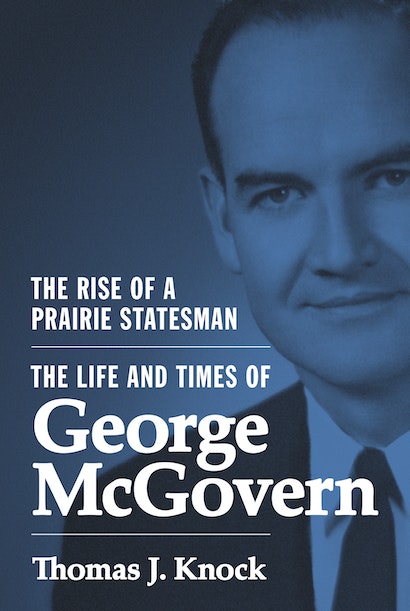 The Rise of a Prairie Statesman is the first volume of a major biography of the 1972 Democratic presidential candidate who became America’s most eloquent and prescient critic of the Vietnam War. In this masterful book, Thomas Knock traces George McGovern’s life from his rustic boyhood in a South Dakota prairie town during the Depression to his rise to the pinnacle of politics at the 1968 Democratic National Convention in Chicago where police and antiwar demonstrators clashed in the city’s streets.

Drawing extensively on McGovern’s private papers and scores of in-depth interviews, Knock shows how McGovern’s importance to the Democratic Party and American liberalism extended far beyond his 1972 presidential campaign, and how the story of postwar American politics is about more than just the rise of the New Right. He vividly describes McGovern’s harrowing missions over Nazi Germany as a B-24 bomber pilot, and reveals how McGovern’s combat experiences motivated him to earn a PhD in history and stoked his ambition to run for Congress. When President Kennedy appointed him director of Food for Peace in 1961, McGovern engineered a vast expansion of the program’s school lunch initiative that soon was feeding tens of millions of hungry children around the world. As a senator, he delivered his courageous and unrelenting critique of Lyndon Johnson’s escalation in Vietnam—a conflict that brought their party to disaster and caused a new generation of Democrats to turn to McGovern for leadership.

A stunning achievement, The Rise of a Prairie Statesman ends in 1968, in the wake of the assassinations of Martin Luther King and Robert Kennedy, when the “Draft McGovern” movement thrust him into the national spotlight and the contest for the presidential nomination, culminating in his triumphal reelection to the Senate and his emergence as one of the most likely prospects for the Democratic nomination in 1972..

Thomas J. Knock is Altshuler Distinguished Teaching Professor at Southern Methodist University. He is the author of the prize-winning To End All Wars: Woodrow Wilson and the Quest for a New World Order and the coauthor of The Crisis of American Foreign Policy: Wilsonianism in the Twenty-first Century (both Princeton). He lives in Dallas, Texas.

"The Rise of a Prairie Statesman is the remarkable story of the making of one of the lions of liberalism, yet a man who also won the Distinguished Flying Cross. This brilliantly told saga of how a soft-spoken man of the Midwest shook up the established political order and emerged as one of the most eloquent and thoughtful leaders of the twentieth century is a must-read for anyone interested in American politics in the postwar era."—Robert P. Watson, Journal of American History

"An important reconsideration of a significant 20th-century politician."—Kirkus

"[I]n every way, the book succeeds. This is political writing—and life-writing—of the first order."—Open Letters Monthly

"This biography will stand as the standard bearer for all future biographies. It is detailed enough to get to know the person in-depth, and it is well written; unlike some biographies, this one flows smoothly, but keeps it academic for fellow researchers and students."—San Francisco Book Review

"Knock's highly informed, comprehensive, and sympathetic portrait of George McGovern up through his 1968 reelection to the Senate suggests that the second volume will amply prove his credentials as a statesman, explain his greatness, and make it apparent why he merits a two-volume biography."—Bartholomew Sparrow, Perspectives on Politics

"I started [the book] believing George McGovern to be the greatest presidential nominee of my lifetime and I finished it considering him to be one of the most qualified people ever to seek the presidency. As much of an admirer as I was, previously I had not fully appreciated the greatness of the man. I eagerly await book two."—Tom Gallagher, Los Angeles Review of Books

"Knock's excellent, polished book is the first in a two-volume biography, and it ends in 1968, just as McGovern was hitting his peak years in politics. By doing so, it avoids framing his career in the context of that crushing 1972 defeat, thereby reminding us that in his prime, he was both a moral exemplar and a highly effective politician."—Ryan Cooper, The Nation

"The Rise of a Prairie Statesman cannot be judged as anything but a critical success."—Brad Baranowski, History

"The first installment of this much-anticipated biography of George McGovern is here, and it delivers in spades. Knock doesn't merely tell the rich and compelling story of the rise of this ‘prairie statesman' to political prominence. First-rate historian that he is, he also illuminates a great deal about American political culture in the middle decades of the twentieth century."—Fredrik Logevall, Pulitzer Prize–winning author of Embers of War: The Fall of an Empire and the Making of America's Vietnam

"Thomas Knock has written what is sure to remain the definitive account of George McGovern's important and eventful life. But Knock's achievement goes well beyond mere biography. With empathy and insight, he traces the history of twentieth-century prairie progressivism, which like McGovern himself achieved much even while tested by severe trials. The reader reaches the end of this engrossing volume eagerly awaiting the next."—Andrew J. Bacevich, professor emeritus, Boston University

"George McGovern is remembered largely for losing badly to Richard Nixon. He should be remembered as a war hero and prairie progressive who, in troubled times, stood up for what he believed was right. Through deep research and writerly grace, Knock brings him to life."—Evan Thomas, author of Being Nixon: A Man Divided

"McGovern was one of the most remarkable and least understood figures in modern American politics. He embodied some of America's most admirable and enduring values, yet today he is remembered chiefly for losing in a landslide to Nixon. Here, Knock sets the record straight. It's about time, and this thoroughly researched, thoughtfully argued, and elegantly written book is just what the job requires."—H. W. Brands, author of Reagan: The Life

"In The Rise of a Prairie Statesman, Thomas Knock provides a vivid and insightful portrait of one of the most influential and iconic figures ever to appear on the American political stage. McGovern's call, 'Come home, America,' is as provocative today as it was in 1972."—Randall B. Woods, author of LBJ: Architect of American Ambition

"This first volume of Knock's exploration of George McGovern's life offers an extremely well written and engaging account of the congressman and future presidential candidate. The Rise of a Prairie Statesman is an excellent, meticulously researched book."—Julian E. Zelizer, author of The Fierce Urgency of Now: Lyndon Johnson, Congress, and the Battle for the Great Society

"This is a fascinating book about a man whose historical reputation ought not to be dominated by one landslide defeat. Knock has done McGovern proud."—Michael Kazin, author of American Dreamers: How the Left Changed a Nation