Exploring the link between the ocean's currents and rapid climate change 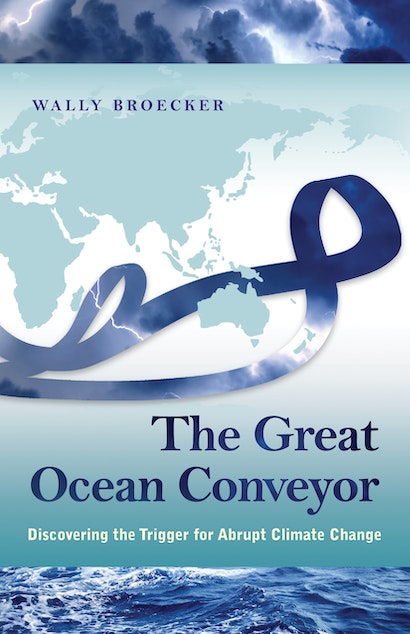 Wally Broecker is one of the world’s leading authorities on abrupt global climate change. More than two decades ago, he discovered the link between ocean circulation and climate change, in particular how shutdowns of the Great Ocean Conveyor—the vast network of currents that circulate water, heat, and nutrients around the globe—triggered past ice ages. Today, he is among the researchers exploring how our planet’s climate system can abruptly “flip-flop” from one state to another, and who are weighing the implications for the future. In The Great Ocean Conveyor, Broecker introduces readers to the science of abrupt climate change while providing a vivid, firsthand account of the field’s history and development.

Could global warming cause the conveyor to shut down again, prompting another flip-flop in climate? What were the repercussions of past climate shifts? How do we know such shifts occurred? Broecker shows how Earth scientists study ancient ice cores and marine sediments to probe Earth’s distant past, and how they blend scientific detective work with the latest technological advances to try to predict the future. He traces how the science has evolved over the years, from the blind alleys and wrong turns to the controversies and breathtaking discoveries. Broecker describes the men and women behind the science, and reveals how his own thinking about abrupt climate change has itself flip-flopped as new evidence has emerged.

Rich with personal stories and insights, The Great Ocean Conveyor opens a tantalizing window onto how Earth science is practiced.

Wally Broecker is the Newberry Professor of Earth and Environmental Sciences at Columbia University. His books include Fixing Climate: What Past Climate Changes Reveal about the Current Threat--and How to Counter It and Chemical Oceanography. He is a member of the National Academy of Sciences.

"Wally Broecker is one of the great pioneers of paleoclimatology, the study of past climate changes in Earth's history. He introduced the term global warming and, in the 1980s, proposed the global ocean-circulating system, which he dubbed the Great Ocean Conveyor. . . . In The Great Ocean Conveyor, Broecker offers a history of his thinking on the topic. Relating his breakthroughs and setbacks, he portrays science as a 'continual struggle to understand more fully and more accurately how the world really works.'"—Nature

"As U.S. climate scientist Wally Broecker . . . discovered, the planet's climate has abruptly flip-flopped many times. The culprit is the Great Ocean Conveyor, a planet-wide system of ocean currents known to the cognoscenti as the thermohaline circulation. [I]t's an entertaining personal tale of pulling the scientific pieces together."—Leigh Dayton, Australian

"In his latest book, prolific author and noted scientist Broecker investigates how the ocean's vast network of currents drives abrupt climate change. The author explores the science behind ocean current models such as the Great Ocean Conveyor Belt as a trigger to explain the mystery of the Earth's intermittent pattern of global ice ages. . . . Anyone who has walked on a beach, thrown a snowball, or flown over the ocean will be fascinated by this excellent book geared to undergraduate scientists and the general public."—Choice

"I strongly recommend the book to all the students interested in climate change but also to active researchers. . . . One of the biggest advantages for young researchers may be to find in Broecker's book not only answers but also clear statements about important open questions. They may serve in my opinion as a good guide stimulating future research."—Witold Szczucinski, Geologos

"This is an outstanding lesson of how things in the scientific community should be! Broecker's book is recommended as a must read for professionals and graduate students specialized in the late Cenozoic palaeoclimatology and palaeoceanography."—Dmitry A. Ruban, Zentralblatt fur Geologie und Palaontologie

"With this highly entertaining tale of scientific and personal adventure, Wally Broecker has invented a new genre: the science detective thriller."—Kerry A. Emanuel, Massachusetts Institute of Technology

"In The Great Ocean Conveyor, the great Wally Broecker, dean of climate scientists, skillfully mixes history and science to provide the essential description of how he solved the mystery of the abrupt climate jumps of the past."—Richard B. Alley, Pennsylvania State University

"Broecker presents a lively discussion of how his thinking on the variability of ocean circulation has itself flip-flopped through time, and in the process gives readers insight into how he conducts science and into the rich behavior of ocean circulation. The book should be widely accessible to people outside the field and offers an introduction to concepts pioneered by Broecker himself, in a manner which is personal and engaging."—Peter Huybers, Harvard University

"This memoir is a delight to read, full of interesting tidbits and historical anecdotes, as well as scientific insights. Scientists and students around the world will surely find the book useful and interesting."—Geoffrey K. Vallis, Princeton University