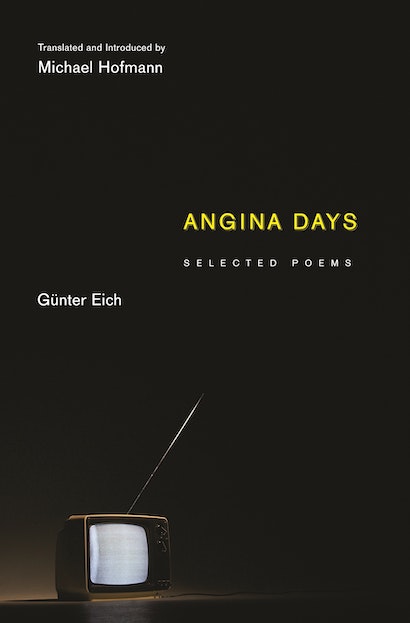 This is the most comprehensive English translation of the work of Günter Eich, one of the greatest postwar German poets. The author of the POW poem “Inventory,” among one of the most famous lyrics in the German language, Eich was rivaled only by Paul Celan as the leading poet in the generation after Gottfried Benn and Bertolt Brecht. Expertly translated and introduced by Michael Hofmann, this collection gathers eighty poems, many drawn from Eich’s later work and most of them translated here for the first time. The volume also includes the original German texts on facing pages.

As an early member of “Gruppe 47” (from which Günter Grass and Heinrich Böll later shot to prominence), Eich (1907-72) was at the vanguard of an effort to restore German as a language for poetry after the vitriol, propaganda, and lies of the Third Reich. Short and clear, these are timeless poems in which the ominousness of fairy tales meets the delicacy and suggestiveness of Far Eastern poetry. In his late poems, he writes frequently, movingly, and often wryly of infirmity and illness. “To my mind,” Hofmann writes, “there’s something in Eich of Paul Klee’s pictures: both are homemade, modest in scale, immediately delightful, inventive, cogent.”

Michael Hofmann is an award-winning poet and translator. His Selected Poems (Farrar, Straus and Giroux) appeared in 2009. His other books include the anthology Twentieth-Century German Poetry (Farrar, Straus and Giroux) and the book of essays Behind the Lines (Faber & Faber). He has translated Durs Grünbein, Franz Kafka, Wolfgang Koeppen, and Joseph Roth, among many other writers. He teaches at the University of Florida in Gainesville, and lives in London and Hamburg.

"Angina Days, a crisp new selection translated by Michael Hofmann and published in Princeton's 'Facing Pages' series, is an opportunity for Eich to secure at last the English-speaking readership he has long deserved. In the German-speaking world, Eich is widely accepted as a twentieth-century classic, the supreme poet of unease. His poem 'Inventur' ('Inventory') is one of the best known poems in the language. Born in 1907 in Lebus on the Oder, a small village near Berlin, Eich was a member, along with Heinrich Böll and Günter Grass, of the Gruppe 47, a literary association 'called into being to cleanse and adjust and simplify' the German language after its abuse by the Third Reich, as Hofmann explains in his excellent introduction. . . . Hofmann's translations in Angina Days have the confidence, clearness and clout to offer Eich salvation from obscurity. . . . Hofmann's new translations are neither cumbersome nor dull. They work as poems independently from the German. They are animated, idiomatic, attractively spry, and above all they allow Eich's voice to reach us loud and clear—peevish, skeptical, true to itself, irresistible."—Siriol Troup, Times Literary Supplement

"At last a major portion of the poetry of Günter Eich (1907-1972) has been made accessible to an English-speaking readership in a new translation."—Axel Vieregg, Berlin Review of Books

"Fortunately, renowned poet and translator Michael Hofmann has brought a selection of Eich's late poetry into sharp, searing English in Angina Days, a book that will remain the definitive translated edition of Eich's late work. . . . Eich's scaled-back language—in Hofmann''s deft translation—facilitates a devastatingly unsentimental tone appropriate for this clear-eyed consideration of what it means to be a prisoner, and what a prisoner's simple possessions mean to him. . . . Michael Hofmann's thrilling new translations of this neglected master will stick like barbs in the minds of English-language readers for years to come."—Stephan Delbos, Prague Post

"Since I mention poetry, I should say that Michael Hofmann's translations of the poems of the German poet Guenter Eich, Angina Days, is one of the best books to come out in 2010. Eich's acerbic, chafing, sensuous verses, dealing with life's most basic anxieties and activities, refute, through a combination of stubbornness and technique, Adorno's stricture about the impossibility of poetry after Auschwitz."—Amit Chaudhuri, Outlook India

"Contemporary literature would be a great deal duller, sparser and more insular without Michael Hofmann. . . . Eich (1907-72) is among the most significant voices in post-war German poetry. For anyone new to [Eich], Hofmann's selection, drawn mainly from his later work, is an excellent introduction."—Dennis O'Driscoll, PN Review

"Of the three postwar writers whose work seems most clearly to answer to Adorno's sense that no poetry can be written after the Holocaust, it is Eich (Beckett and Celan are the others) whose refusal of rhetoric is most thorough, with the result that the speaker—the authorial presence—whoever it is who would have persuaded, blamed, or badgered us, seems to have vanished into thin air, leaving nothing to come between ourselves and the pure experience offered by the poems."—Belle Randall, poetry editor, Common Knowledge

"This is an extremely important book. Günter Eich is a highly significant German poet and Michael Hofmann is the master translator of contemporary German literature—both poetry and prose—into English. These pieces of Eich's are powerful, bitter, and compressed poems in English, and they will enlarge the landscape of postwar German poetry for Anglophone readers. Eich and Hofmann meet in blessed conjunction."—Rosanna Warren, author of Departure: Poems