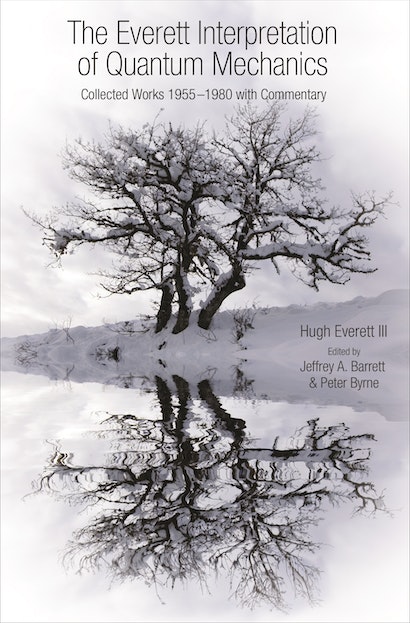 Hugh Everett III was an American physicist best known for his many-worlds interpretation of quantum mechanics, which formed the basis of his PhD thesis at Princeton University in 1957. Although counterintuitive, Everett’s revolutionary formulation of quantum mechanics offers the most direct solution to the infamous quantum measurement problem — that is, how and why the singular world of our experience emerges from the multiplicities of alternatives available in the quantum world. The many-worlds interpretation postulates the existence of multiple universes. Whenever a measurement-like interaction occurs, the universe branches into relative states, one for each possible outcome of the measurement, and the world in which we find ourselves is but one of these many, but equally real, possibilities. Everett’s challenge to the orthodox interpretation of quantum mechanics was met with scorn from Niels Bohr and other leading physicists, and Everett subsequently abandoned academia to conduct military operations research. Today, however, Everett’s formulation of quantum mechanics is widely recognized as one of the most controversial but promising physical theories of the last century.


In this book, Jeffrey Barrett and Peter Byrne present the long and short versions of Everett’s thesis along with a collection of his explanatory writings and correspondence. These primary source documents, many of them newly discovered and most unpublished until now, reveal how Everett’s thinking evolved from his days as a graduate student to his untimely death in 1982. This definitive volume also features Barrett and Byrne’s introductory essays, notes, and commentary that put Everett’s extraordinary theory into historical and scientific perspective and discuss the puzzles that still remain.

Jeffrey A. Barrett is professor of logic and philosophy of science at the University of California, Irvine. Peter Byrne is an award-winning investigative reporter and science writer.

"What can be said without dispute is that the present editors have done an excellent job in presenting the available material. Their book can be highly recommended to physicists in each of the two parallel branches of the mental universe!"—Peter J. Bussey, Contemporary Physics

"This book will be very useful for historians as well any philosophers working on the development of interpretations of quantum theory."—K.-E. Hellwig, Zentralblatt MATH

"[T]he book is a mandatory read for anyone interested in the history of the philosophy of quantum mechanics. The editors have skillfully grouped the material according to both chronological order and topical concern, and have added a fair amount of useful annotation, assisting the reader without being overly intrusive. Short but expertly written introductions provide necessary context on the biographical and conceptual dimensions. The book is also a fascinating and rewarding read."—Tilman Sauer, British Journal for the History of Science

"In sum: Spinoza's metaphysics has returned in the work of Hugh Everett as physics—as a complete and consistent interpretation of QM that resolves the traditional puzzles of the standard interpretation."—Sheldon Richmond, Philosophy in Review

"It's a good thing, both for physicists working on the foundations of quantum theory and for historians of science, that these papers have been collected and made available in so convenient a form. They give a fascinating glimpse into one of the most important chapters in the history of ideas."—David Deutsch, author of The Beginning of Infinity

"This book is an interesting and important contribution to the scholarship on the Everett interpretation. It is unique in presenting early unpublished material by Everett on preliminary versions of his interpretation as well as correspondence between Everett and various physicists on the interpretation. A fascinating read for anyone interested in understanding the development of Everett's thinking."—Jeffrey Bub, author of Interpreting the Quantum World