A sweeping account of how the sea routes of Asia have transformed a vast expanse of the globe over the past five hundred years, powerfully shaping the modern world 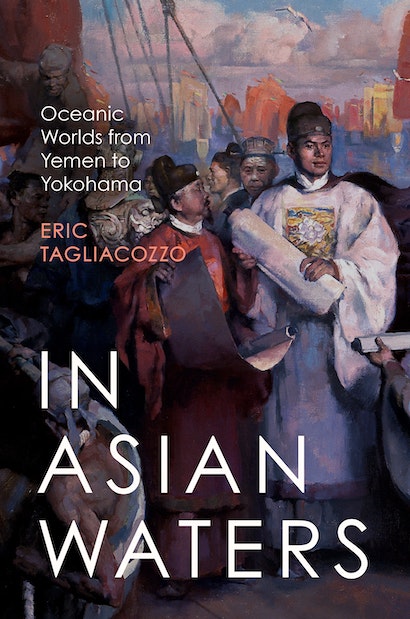 In the centuries leading up to our own, the volume of traffic across Asian sea routes—an area stretching from East Africa and the Middle East to Japan—grew dramatically, eventually making them the busiest in the world. The result was a massive circulation of people, commodities, religion, culture, technology, and ideas. In this book, Eric Tagliacozzo chronicles how the seas and oceans of Asia have shaped the history of the largest continent for the past half millennium, leaving an indelible mark on the modern world in the process.

Paying special attention to migration, trade, the environment, and cities, In Asian Waters examines the long history of contact between China and East Africa, the spread of Hinduism and Buddhism across the Bay of Bengal, and the intertwined histories of Islam and Christianity in the Philippines. The book illustrates how India became central to the spice trade, how the Indian Ocean became a “British lake” between the seventeenth and nineteenth centuries, and how lighthouses and sea mapping played important roles in imperialism. The volume ends by asking what may happen if China comes to rule the waves of Asia, as Britain once did.

A novel account showing how Asian history can be seen as a whole when seen from the water, In Asian Waters presents a voyage into a past that is still alive in the present.

Eric Tagliacozzo is the John Stambaugh Professor of History at Cornell University. His many books include Secret Trades, Porous Borders: Smuggling and States along a Southeast Asian Frontier, 1865–1915 and The Longest Journey: Southeast Asians and the Pilgrimage to Mecca.

“Drawing on years of travel, many archives, and countless dockside conversations, Eric Tagliacozzo’s masterpiece shows how the connected past of maritime Asia has shaped our world. This is an epic yet intimate history of Asia’s seas: alive with the drama of port cities, and told with grace and empathy by a natural storyteller.”—Sunil Amrith, author of Unruly Waters: How Rains, Rivers, Coasts, and Seas Have Shaped Asia’s History

“Skillfully navigating the overlapping themes of environment and religion, imperial power and technology, and urbanism and trade, Eric Tagliacozzo has written a magnificent oceanic history of a continent. In Asian Waters takes its readers on an adventurous voyage of discovery, tracing historical connections from the Arabian Sea through the Bay of Bengal to the South China Sea.”—Sugata Bose, author of A Hundred Horizons: The Indian Ocean in the Age of Global Empire

“In Asian Waters is a deeply sourced, eloquently executed, globe-spanning history from the eastern coast of Africa and the Red Sea, across the Indian Ocean, to the South China and Sulu seas and into the Pacific. Eric Tagliacozzo journeys along religious circuits through ancient and modern port cities, traverses the environments of sea cucumbers and spices, and debates with locals and scholars about politics, pirates, trading firms, hydrographic stations, lighthouses, amulets, and aircraft carriers to offer a true epic of Asian waters across centuries.”—Matt K. Matsuda, author of Pacific Worlds: A History of Seas, Peoples, and Cultures

“This sweeping account will bury once and for all the Orientalist trope of Asia as a continent of agrarian empires. Through a vivid portrait spanning the past half millennium, Eric Tagliacozzo makes the case for maritime Asia as the birthplace of modernity and its discontents. In Asian Waters is an engrossing and thought-provoking read.”—Francesca Trivellato, author of The Promise and Peril of Credit: What a Forgotten Legend about Jews and Finance Tells Us about the Making of European Commercial Society

“By turns zooming in on a given coast or port and pulling back for panoramic views of empire, religion, and exchange, In Asian Waters is a lively, kaleidoscopic introduction to a great arc of maritime history.”—Kären Wigen, coauthor of The Myth of Continents: A Critique of Metageography