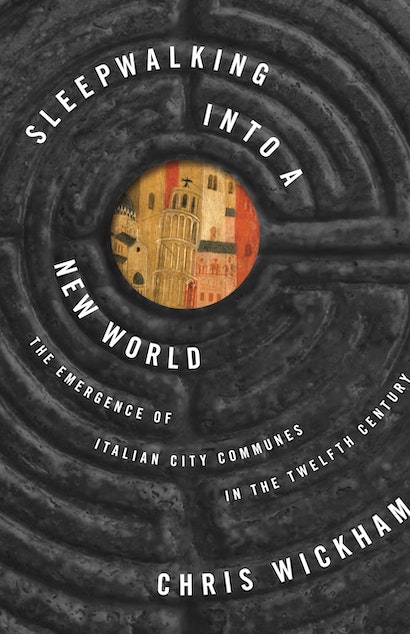 Amid the disintegration of the Kingdom of Italy in the eleventh and twelfth centuries, a new form of collective government—the commune—arose in the cities of northern and central Italy. Sleepwalking into a New World takes a bold new look at how these autonomous city-states came about, and fundamentally alters our understanding of one of the most important political and cultural innovations of the medieval world.

Chris Wickham provides richly textured portraits of three cities—Milan, Pisa, and Rome—and sets them against a vibrant backcloth of other towns. He argues that, in all but a few cases, the elites of these cities and towns developed one of the first nonmonarchical forms of government in medieval Europe, unaware that they were creating something altogether new. Wickham makes clear that the Italian city commune was by no means a democracy in the modern sense, but that it was so novel that outsiders did not know what to make of it. He describes how, as the old order unraveled, the communes emerged, governed by consular elites “chosen by the people,” and subject to neither emperor nor king. They regularly fought each other, yet they grew organized and confident enough to ally together to defeat Frederick Barbarossa, the German emperor, at the Battle of Legnano in 1176.

Sleepwalking into a New World reveals how the development of the autonomous city-state took place, which would in the end make possible the robust civic culture of the Renaissance.

Chris Wickham is professor emeritus of medieval history at the University of Oxford.

"Wickham's expert analysis and meticulous academic approach build on previous. Limited examinations and substantial documentation to turn established research on its head, as he presents a fresh look into how communes in the mid-12th century successfully prepared Italian power structures for the cultural significance they would later have."—Publishers Weekly

"Wickham's analysis is meticulous and incisive, and he situates his conclusions clearly in light of the prior historiography."—Choice

"This book provides a useful foray into the internal debates occurring in those movements and thus lends layers of complexity to the overall argument."—Brooke Sherrard, Nova Religio

"Wickham has a deep knowledge of the previous literature in the topic and an awareness of how this is linked to debates with broad ideological implications, such as the origins of Renaissance and of Republican forms of government and values."—Michele Campopiano, Catholic Historical Review

"This elegant, concise, and highly readable book tackles afresh one of the great problems of world history. Generously acknowledging the research of previous historians and scrupulously avoiding foregone conclusions, Wickham compares Milan, Pisa, and Rome to revelatory effect. This is a work of huge analytical and explanatory power that can be read for sheer intellectual joy."—Jinty Nelson, King's College London

"If ever a book needed writing, it is this one. Here we have a familiar narrative reinterpreted, from virtuosic research, by a master historian. With consummate vigor and clarity, Wickham shows how the rise of communal regimes in medieval Italy was hardly the doing of revolutionaries, as some once thought, but was rather a pragmatic adaptation to social and economic change by men assuming consular responsibilities within the lordships of bishops."—Thomas N. Bisson, Harvard University

"How and why did the commune, that remarkable form of medieval Italian urban governance, evolve, under what stimuli and with what longer term results? These are some of the key questions to which we are given persuasive and well-argued answers in this eminently readable, deeply scholarly, and very welcome volume—a major achievement on which the author is to be heartily congratulated."—John F. Haldon, Princeton University

"Absent from this book are the myths of urban liberty, proto-democracy, and incipient modernity commonly associated with the rise of the Italian commune, and in their place stand defensive reactions to crises, warfare, improvisation, and broader political participation. Wickham describes the process eloquently and with the skill of a gifted social historian."—Edward Peters, University of Pennsylvania

"Sleepwalking into a New World is an elegantly written study that addresses one of the major questions in Italian history and presents it in a fresh way. Wickham is the leading medieval historian of this generation, and his decades of studying Italian cities are evident on every page."—Patrick Geary, author of The Myth of Nations: The Medieval Origins of Europe

"This is a brilliant book that will generate much debate. It boldly sets forth a new interpretation of how and why the communes emerged while pointing out aspects of their institutional development that merit greater scrutiny. Sleepwalking into a New World is a tour de force by one of the most original historians working today."—Maureen C. Miller, author of Clothing the Clergy: Virtue and Power in Medieval Europe, c. 800–1200