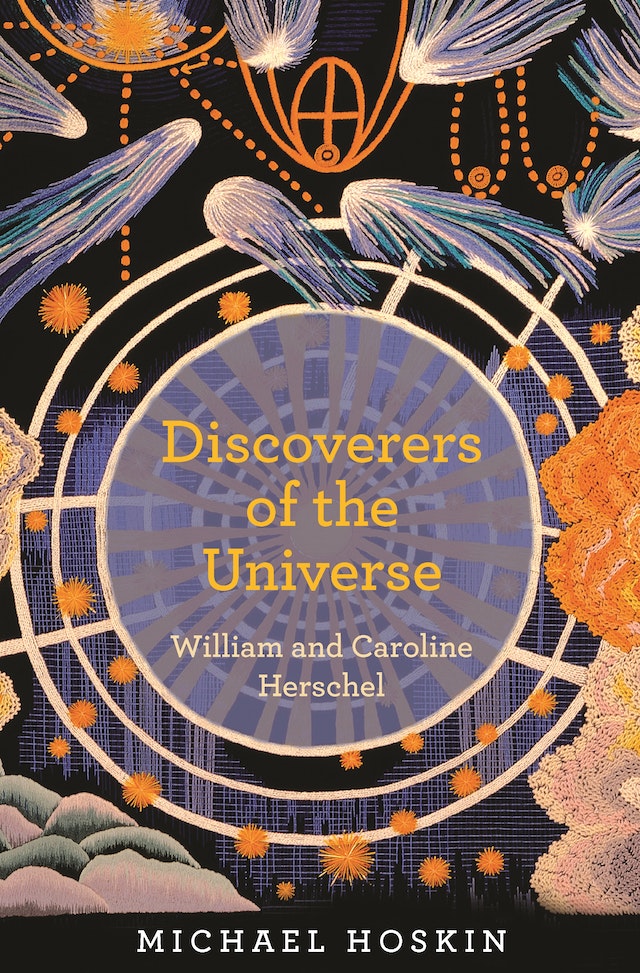 Discoverers of the Universe tells the gripping story of William Herschel, the brilliant, fiercely ambitious, emotionally complex musician and composer who became court astronomer to Britain’s King George III, and of William’s sister, Caroline, who assisted him in his observations of the night sky and became an accomplished astronomer in her own right. Together, they transformed our view of the universe from the unchanging, mechanical creation of Newton’s clockmaker god to the ever-evolving, incredibly dynamic cosmos that it truly is.


William was in his forties when his amateur observations using a homemade telescope led to his discovery of Uranus, and an invitation to King George’s court. He coined the term “asteroid,” discovered infrared radiation, was the first to realize that our solar system is moving through space, discovered 2,500 nebulae that form the basis of the catalog astronomers use today, and was unrivalled as a telescope builder. Caroline shared William’s passion for astronomy, recording his observations during night watches and organizing his papers for publication. She was the first salaried woman astronomer in history, a pioneer who herself discovered nine comets and became a role model for women in the sciences.


Written by the world’s premier expert on the Herschels, Discoverers of the Universe traces William and Caroline’s many extraordinary contributions to astronomy, shedding new light on their productive but complicated relationship, and setting their scientific achievements in the context of their personal struggles, larger-than-life ambitions, bitter disappointments, and astonishing triumphs.

Michael Hoskin is fellow of Churchill College at the University of Cambridge, where he lectured in the history of astronomy from 1959 until his retirement in 1988, and founding editor of the Journal for the History of Astronomy. His books include The Herschel Partnership as Viewed by Caroline and The Cambridge Illustrated History of Astronomy.

"The Herschels, claims Hoskin, were foremost in changing the view of the universe from a static, mechanical creation to that of a living, changing cosmos. . . . Drawing from William's papers, as well as journals and autobiographies penned by Caroline, Hoskin relates the fascinating story of a man who pursued his passion and left a large legacy to science, and the sister who abandoned a singing career to familial obligations, which in time produced rewards for her as well."—Publishers Weekly

"The fascinating story of how the Herschels ventured to Slough and beyond is told well in this book written for the general reader by Michael Hoskin."—Peter Rodgers, Nature

"In this joint biography, written with the cooperation of the Herschel family, historian of astronomy Michael Hoskin portrays the siblings' shared passion for the night sky, and the triumphs and pitfalls of their work. Using an amateur telescope, the pair charted thousands of stars and nebulae in catalogues that are still used today."—Nature

"[Hoskin brings] the Herschels to life against the background of late eighteenth- and early nineteenth-century society in England. . . . This is an elegant and enjoyable book that will delight equally readers who have no background in astronomy and those who think they already know about the Herschels."—John Gribbin, Literary Review

"This is very readable and deeply informed."—Steven Carroll, The Age

"Brisk and engagingly written. . . . [Hoskin is] such an experienced historian of astronomy that his account and evaluation of the Herschels' technical progress within that discipline is unrivalled."—William Poole, Times Higher Education

"Fascinating. . . . A very highly readable account of the Golden Age of British astronomy, and I would recommend it to anyone interested in getting a look at just how those astronomers of yore operated."—David Dickinson, Astroguyz

"An amazing book. . . . Although everyone interested in astronomy should read this book, you will love it because it takes readers back in time to visit the Herschels and witness their interactions with people ranging from the king to commoners."—Dr. Milton Friedman, Montgomery News

"All in all I found this a great read, and Michael Hoskin is to be congratulated for producing a volume that gives us far more than a mere scientific or technical account of the Herschels. This fascinating book deserves to be on the bookshelf of anyone with an interest in the history of astronomy."—Wayne Orchiston, Journal of Astronomical History and Heritage

"This is a charming book. . . . It is also beautifully produced with quality illustrations throughout to complement the text. I could not recommend it more highly. Read it and you will never again be able to read or hear the name 'Herschel without recalling the vivid characters it depicts."—Jacqueline Mitton, Journal of the British Astronomical Association

"Hoskin provides a comprehensive scientific and social biography of siblings William and Caroline Herschel, told with a liveliness that often reads like a novel. . . . Amateur astronomers of today should find inspiration in this work."—Choice

"This splendid account brings the characters to life and will be enjoyed by anyone with the remotest interest in the history of science, and even those who just like a good story."—David Stickland, Observatory

"Hoskin's sympathetic and balanced portrait of this remarkable family is a culminating lesson from a Cambridge don: science is composed of equal parts passion and hard work, while great contributions require openness to the evidence, even when it contradicts the prevailing view. This book will interest amateur stargazers, scientists, those interested in women's history and 18th-century English life, and anyone who has gazed in wonder at the night sky."—Susan Meadows, Santa Fe New Mexican Pasa Tiempo

"The achievements of the Herschels are relatively well documented, but thanks to painstaking research, peerless knowledge of his subject and a rare talent for story-telling, Hoskin manages to bring both them and the England they inhabited gloriously alive. Discoverers of the Universe deserves a place on any bookshelf."—Peter Smith, SpaceStories.com

"The book shows an extraordinary volume of research, but then Hoskin has been researching and writing about the Herschels for nearly half a century. Where it is strongest is on his effortless explanations of William's developing research projects once he became an astronomer."—Emily Winterburn, Journal of BJHS

"Obviously, this book was not written with mathematicians in mind, but aims at a general audience instead. Those readers with an interest in astronomy and/or history of science will surely find it as enjoyable as I did."—Álvaro Lozano-Robledo, MAA Reviews

"This book is a delight. Like the Herschels themselves, Hoskin's dual-biography combines unusual qualities. Carefully researched and gracefully written, it can be appreciated by astronomers, sopranos, oboists, and snooty specialists. Hoskin has forever fixed the Herschels in the firmament. Rightly so."—Robert Alan Hatch, Metascience

"[T]he intertwining of the family life, records from new sources, and the Herschels' contributions to astronomy make this an interesting volume and one that anyone with a modicum of interest in the history of astronomy will find fascinating."—Randall Brooks, Eighteenth-Century Fiction

"Hoskin's portrayal of the careers and significance of the Herschels will be compelling and satisfying for the general reader and an excellent introduction to these topics for historians of astronomy, though the broad strokes used will occasionally leave the historian asking for more. . . . The strength of the book is that it is built on a career centered on working to understand the Herschels and is presented by one who genuinely admires them. This admiration and expertise go hand in hand to create a compelling and accurate survey of two truly remarkable careers."—Michael J. Crowe and Stephen Case, ISIS

"Discoverers of the Universe: William and Caroline Herschel springs from the findings of a lifetime of scholarly endeavor by Michael Hoskin. Accessible and brightly written in a very fluent style as well as splendidly illustrated, it will bring the Herschels and their remarkable lives to still wider attention."—Robert W. Smith, Canadian Journal of History

"This book should now become the standard entry point to the considerable body of historical literature on the Herschels as well as to the primary literature . . . Hoskin's deep knowledge of Hershel's techniques and instruments allows him to understand and explain the challenges and constraints that shaped the way they worked and drove the constant technical innovations that were part of the reasons for their spectacular success. But perhaps the most intriguing aspect of this book is the detailed and occasionally even intimate insights into the very origins of modern astronomy in the real night-by-night work of William and Caroline."—James Lattis, European Legacy

"The understanding of the cosmos as a whole has been profoundly influenced by the early work carried out by William Herschel with the assistance of his sister Caroline. Michael Hoskin brings out so very well in this book the many incidents and stories that establish how this was achieved, while placing them within the broader context of the astronomical establishment and aristocracy during the late eighteenth and early nineteenth centuries."—John Herschel-Shorland

"Nobody is better qualified than Michael Hoskin to assess the crucial role of the Herschels in transforming our cosmic perspective. He clearly conveys their extraordinary energy and commitment, and sets their great achievements in the context of their lives and their era. His elegant writing ensures that this book can be enjoyed even by those with no background in astronomy."—Martin Rees, Astronomer Royal

"Hoskin's keen observations provide exceptional resolution of the binary pair, William and Caroline Herschel. Transforming himself from a stargazing musician into the world's best astronomer, William also paved the path for his remarkable sister to become an astronomer in her own right. Together, they revolutionized astronomy itself, to reveal the structure and evolution of the universe. Hoskin is a meticulous and thoughtful guide to the lives and achievements of these extraordinary siblings."—Robert P. Kirshner, author of The Extravagant Universe

"A wonderfully detailed picture of the famous astronomer William Herschel and his family, illustrating the crucial roles of his sister Caroline in his observation program, of his brother Alex in the construction of his telescopes, and of his son John in completing his survey of nebulae."—Michael Rowan-Robinson, Imperial College London

"Michael Hoskin is a storyteller of science, here relating the fascinating story of the unlikely pair, brother and sister, who pioneered our modern understanding of the larger universe. William Herschel's discovery of Uranus and mapping of nebulae are widely known while Caroline Herschel's collaboration and her independent discovery of comets deserve to be more widely known. Here are their lives, and their extended family's lives, well told and well illustrated."—Jay M. Pasachoff, Williams College

"Discoverers of the Universe is full of fascinating information that has never before seen the light of day. No other account comes close to the richness of detail found in this book, which will become the definitive reference source on the Herschels. Hoskin is exactly the right person to write such a biography."—Owen Gingerich, author of God's Universe