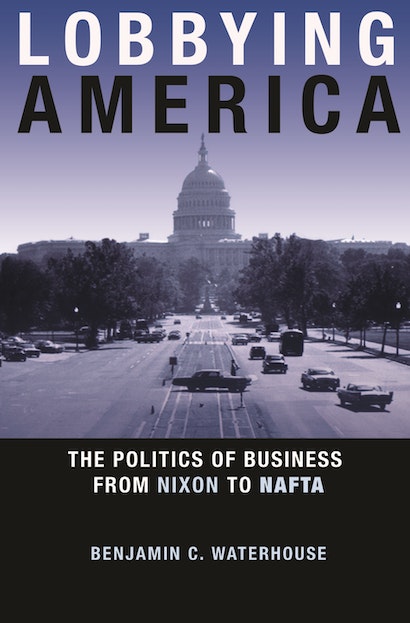 Lobbying America tells the story of the political mobilization of American business in the 1970s and 1980s. Benjamin Waterhouse traces the rise and ultimate fragmentation of a broad-based effort to unify the business community and promote a fiscally conservative, antiregulatory, and market-oriented policy agenda to Congress and the country at large. Arguing that business’s political involvement was historically distinctive during this period, Waterhouse illustrates the changing power and goals of America’s top corporate leaders.


Examining the rise of the Business Roundtable and the revitalization of older business associations such as the National Association of Manufacturers and the U.S. Chamber of Commerce, Waterhouse takes readers inside the mind-set of the powerful CEOs who responded to the crises of inflation, recession, and declining industrial productivity by organizing an effective and disciplined lobbying force. By the mid-1970s, that coalition transformed the economic power of the capitalist class into a broad-reaching political movement with real policy consequences. Ironically, the cohesion that characterized organized business failed to survive the ascent of conservative politics during the 1980s, and many of the coalition’s top goals on regulatory and fiscal policies remained unfulfilled. The industrial CEOs who fancied themselves the “voice of business” found themselves one voice among many vying for influence in an increasingly turbulent and unsettled economic landscape.


Complicating assumptions that wealthy business leaders naturally get their way in Washington, Lobbying America shows how economic and political powers interact in the American democratic system.

Benjamin C. Waterhouse is associate professor of history at the University of North Carolina, Chapel Hill.

"Waterhouse's Lobbying America is an intricate, well-woven history of the efforts by business to influence U.S. politics. Waterhouse tells the story of how the business community came to lobby with an increasingly unified voice against a background of societal change, shifting cultural values, and an increasingly global economy. . . . Immediately of interest to political scientists and historians, this engaging history of business, politics, and societal change will find a wider audience among readers interested in national politics."—Choice

"Lobbying America is a deeply researched, persuasively argued study that makes important contributions to our understanding of the relationship of business and politics."—Elizabeth Fones-Wolf, Journal of American History

"[Waterhouses's] focus on business lobbying is perceptive and elegantly written and Waterhouse has made an important contribution to the literature on business and politics in the twentieth century."—Gregory L. Schneider, American Historical Review

"Lobbying America explores the fractious history of business influence over American politics and brilliantly charts the business establishment's post-1970 counteroffensive against what its leaders saw as oppressive taxation, regulatory overreach, and an arrogant union movement. Attuned to the political successes and failures of organized business, Waterhouse has produced a must-read for anyone who wishes to understand the United States' late twentieth-century embrace of free market ideology."—Edward Balleisen, Duke University

"In crisp, lucid prose, Waterhouse makes a convincing case for the success of pro-business mobilization during the 1970s and 80s. Waterhouse shows corporate lobbyists reacting to and learning from their opponents in the environmental, consumer, and labor movements, and ultimately leveraging economic upheavals to split those forces and control the terms of debate, if not always the outcomes. This go-to book integrates a lively archival account into the larger narrative of conservative counterrevolution."—Bethany Moreton, University of Georgia

"This outstanding book provides an important and surprisingly underexamined history of the political mobilization of the business community during the 1970s."—Julian Zelizer, Princeton University

"Lobbying America makes a superb contribution to our understanding of the political mobilization of business in the 1970s and after. With its groundbreaking archival work on the rise of the Business Roundtable, the evolution of the Chamber of Commerce and National Association of Manufacturers, and the fissures that emerged in the business coalition during the 1980s, this is essential reading for anyone who wants to understand the history of the power of business in our political life today."—Kim Phillips-Fein, author of Invisible Hands