The science of change from cells to culture 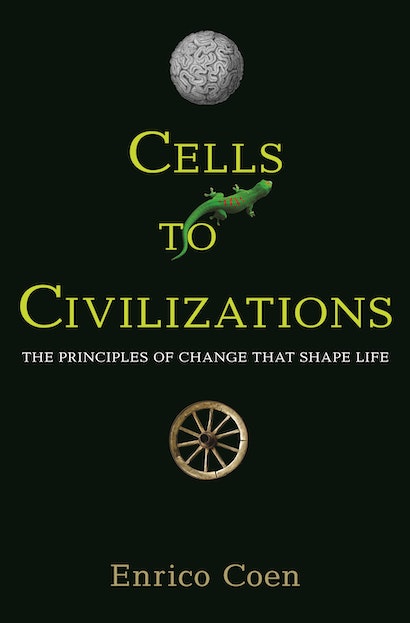 Cells to Civilizations is the first unified account of how life transforms itself—from the production of bacteria to the emergence of complex civilizations. What are the connections between evolving microbes, an egg that develops into an infant, and a child who learns to walk and talk? Award-winning scientist Enrico Coen synthesizes the growth of living systems and creative processes, and he reveals that the four great life transformations—evolution, development, learning, and human culture—while typically understood separately, actually all revolve around shared core principles and manifest the same fundamental recipe. Coen blends provocative discussion, the latest scientific research, and colorful examples to demonstrate the links between these critical stages in the history of life.

Coen tells a story rich with genes, embryos, neurons, and fascinating discoveries. He examines the development of the zebra, the adaptations of seaweed, the cave paintings of Lascaux, and the formulations of Alan Turing. He explores how dogs make predictions, how weeds tell the time of day, and how our brains distinguish a Modigliani from a Rembrandt. Locating commonalities in important findings, Coen gives readers a deeper understanding of key transformations and provides a bold portrait for how science both frames and is framed by human culture.

A compelling investigation into the relationships between our biological past and cultural progress, Cells to Civilizations presents a remarkable story of living change.

Enrico Coen is a plant molecular geneticist based at the John Innes Centre in Norwich, United Kingdom. He is the author of The Art of Genes, a fellow of the Royal Society, and a foreign associate of the U.S. National Academy of Sciences. His awards include the Linnean Gold Medal and the Royal Society Darwin Medal.

"This attempt at a grand theoretical synthesis within biology explores the transformative powers and creative forces that have brought about the living world from the first cells to the latest developments in cultural and technological evolution. . . . [Coen's] eloquently written book offers a programmatic synthesis and an empirically grounded proposal for a theory of biology. . . . Cells to Civilizations will stimulate many productive discussions about the origins and development of life in all its complexities."—Manfred D. Laubichler, Science

"In Cells to Civilization, [Coen] couples his knowledge of genetics with metaphor and art, likening the unfurling of mutant snapdragon flowers to an artist's brushstrokes on an expanding canvas. . . . The book is packed with fascinating facts. . . . [H]uman cultures and minds are among the most complex information systems in nature, and Coen does a good job of reminding us of their roots in evolution."—John Hawks, New Scientist

"The ideas [in Cells to Civilizations] are subtle, possibly significant, and slightly unsettling. What more could a reader wish for?"—Robert Schaefer, New York Journal of Books

"[Coen's] prose is every bit as good as Richard Dawkins' or Steve Jones', and his rich illustrations, particularly the way he uses classical and modern art to make his points, refreshes the text and keeps one's focus on the arguments. His clever ideas and engaging and creative writing style suggest that he would make a fascinating dinner companion. I loved this book and will put it on the general reading list for our biology undergraduates. I suspect it will also find resonance with the interested layman."—Charalambos P. Kyriacou, Times Higher Education

"Cells to Civilizations is a very approachable and thought-provoking reading for everyone involved in education and science."—Monika Biro, American Biology Teacher

"Cells to Civilizations is an intelligent and entertaining book by a distinguished biologist."—Robert C. Richardson, BioScience

"[Cells to Civilizations] was thought provoking, informative, and fun to read."—Choice

"What are the connections between evolving microbes, an egg that develops into an infant, a child who learns to walk, and the rise of Ancient Rome? For many years, scientists have generally thought these great transformations—evolution, development, learning, and cultural change—occurred through different mechanisms. But geneticist Enrico Coen, in his pioneering new book Cells to Civilization, reveals that these transformations revolve around shared core principles and manifest the same fundamental recipe. Coen blends provocative discussion, the latest scientific research, and colourful examples to demonstrate the links between these critical stages in the history of life."—Chemicals & Chemistry

"Coen's book is ambitious and stimulating. . . . Cells to Civilizations is good material for conversation and a worthwhile read."—Deniz Erezyilmaz, truthdig.com

"Do not be daunted by the scope of the book, which is written for a wide audience, although it contains enough science for biologists and anthropologists to ponder and argue with Coen. For the rest, it is an easy read, particularly as the biology it contains is peppered with vignettes drawn from painting and art history, which act as a guide for the more dry science that forms the meat of the argument."—Alfonso Martinez Arias, Development Journal

"Cells to Civilizations explores the extraordinary transformations that are the basis of life. Simple cells evolve into complex animals. Single cells develop into a human being. Newborns learn how to behave in society. Societies create cultural institutions. Coen shows that a small number of principles applies to all these transformations. This book provided me with a real feeling for the unity of life. It gave me a glimpse of that mysterious and awesome circle through which evolution generates not only life, but also self-understanding."—Chris Frith, emeritus professor, University College London

"This is a charming, clever, and thought-provoking book. With examples and metaphors, the book advances the idea that the same basic principles operate in evolution, development, learning, and culture."—Stephen C. Stearns, Yale University

"This attractive book presents a unified account of the emergence of living organisms and seeks common principles across different levels—from the cell to human culture. The clarity of writing and the use of analogies and works of art to illustrate points will make it valuable to both general readers and specialists. The breadth of this book is unmatched."—Michael Corballis, University of Auckland