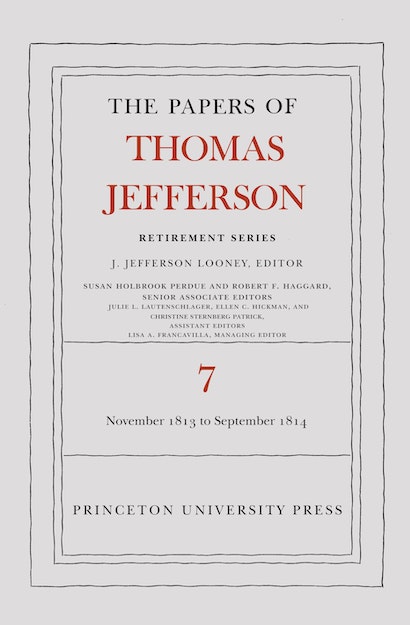 The 526 documents printed in this volume run from 28 November 1813 to 30 September 1814. During this period Jefferson reviews the extant sources on the 1765 Stamp Act crisis to aid William Wirt, a Patrick Henry scholar; records his largely positive impressions of George Washington; and updates a reading list for law students that he had initially drawn up forty years earlier. In the spring of 1814 Jefferson becomes a trustee of the Albemarle Academy, the earliest direct ancestor of the University of Virginia. He is soon actively involved in planning for its establishment, helping to draft rules for governance of the academy’s trustees and propose funding options, and he lays out an expansive vision for its future as an institution of higher learning. Jefferson also exchanges ideas on collegiate education with such respected scholars as Thomas Cooper and José Corrêa da Serra. Jefferson’s wide-ranging correspondence includes a temperate response to a lengthy letter from Miles King urging the retired president to reflect on his personal religion, and a diplomatic but noncommittal reply to a proposal by Edward Coles that the author of the Declaration of Independence employ his prestige to help abolish slavery. Having learned of the British destruction late in August 1814 of the public buildings in Washington, Jefferson offers his massive book collection as a replacement for the Library of Congress. The nucleus for one of the world’s great public libraries is formed early in 1815 when the nation purchases Jefferson’s 6,707 volumes.