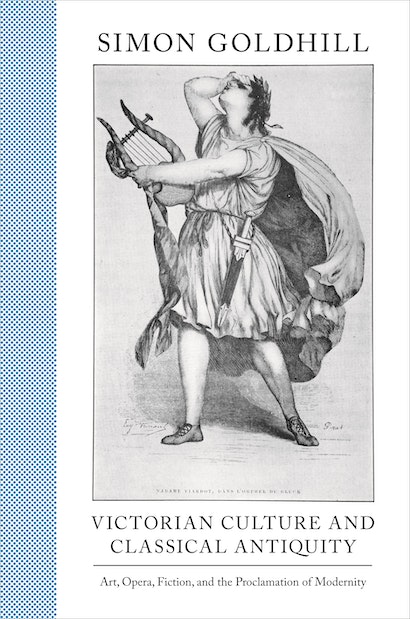 How did the Victorians engage with the ancient world? Victorian Culture and Classical Antiquity is a brilliant exploration of how the ancient worlds of Greece and Rome influenced Victorian culture. Through Victorian art, opera, and novels, Simon Goldhill examines how sexuality and desire, the politics of culture, and the role of religion in society were considered and debated through the Victorian obsession with antiquity.


Looking at Victorian art, Goldhill demonstrates how desire and sexuality, particularly anxieties about male desire, were represented and communicated through classical imagery. Probing into operas of the period, Goldhill addresses ideas of citizenship, nationalism, and cultural politics. And through fiction — specifically nineteenth-century novels about the Roman Empire — he discusses religion and the fierce battles over the church as Christianity began to lose dominance over the progressive stance of Victorian science and investigation. Rediscovering some great forgotten works and reframing some more familiar ones, the book offers extraordinary insights into how the Victorian sense of antiquity and our sense of the Victorians came into being.


With a wide range of examples and stories, Victorian Culture and Classical Antiquity demonstrates how interest in the classical past shaped nineteenth-century self-expression, giving antiquity a unique place in Victorian culture.

Simon Goldhill is professor of Greek literature and culture and fellow and director of Studies in Classics at King's College, University of Cambridge. His many books include Love, Sex, and Tragedy: How the Ancient World Shapes Our Lives.

"Simon Goldhill, a professor at Cambridge, is a leading expert on Greek literature and culture; if you want to know more about the world of Aeschylus and Euripides, Goldhill is your man."—Daniel Snowman, Literary Review

"Using reception theory, Goldhill examines paintings, operas, and novels produced in Europe that appropriate stories from the ancient Greeks, Romans, and Hebrews. He shows how artists and writers retold these ancient stories to further their political and religious agendas. The author is persuasive in arguing that in the 19th century the classics were used to bolster an agenda of anti-Semitism, setting the state for WW II. The book contains beautiful color plates and also black-and-white photos showing works of art of the period and poses drawn from classical statuary. . . . The book is well written and the thesis well worth development."—Choice

"[T]he book is of interest from a Wagnerian perspective in the insight it offers into the concerns of a society contemporary with Wagner and just across the water. . . . In its main topics, the painting and historical novel of Britain in the 19th century, this book is an eye-opener in its fascinating material and its approach."—Michael Dyson, Wagner Journal

"In its scope and verve, Victorian Culture and Classical Antiquity clearly signals just how far reception studies has come within the field of classics, but remains, as well, a timely reminder of just how far we have to go if we are to achieve a true, lasting, and abiding interdisciplinarity."—Thomas E. Jenkins, New England Classic Journal

"[O]ne of the many virtues of Goldhill's work . . . is his ability to draw connections across centuries."—William Baker, Years Work in English Studies

"[T]his is an extremely good book. If it finds the readership it deserves, this volume, which is at once humane and scholarly in its historical account of culture and its vicissitudes, will not only illuminate central issues in Victorian culture; it will also open up new lines of research while closing off fruitless lines of generalization about the classics in the nineteenth century."—Jonah Siegel, Victorian Studies

"This is certainly an important and well researched book. Above all, it provides a valuable reminder to those working in classical reception studies of the importance of historicity."—H. Ellis, English Historical Review

"Goldhill's book is a fascinating contribution to the study of the Victorian reception of the Classics. It provides many new angles on an important area of Reception Studies, and throws new light on more familiar ones."—Richard Warren, Anzeiger fur Altertumwissenschaft

"Goldhill's richly textured, skillfully argued, and improbably erudite journey through France, Germany, and Great Britain in the Victorian period will rightfully place him at the forefront of the burgeoning field of reception studies. Examining the varied, often wildly different influences of Greece and Rome in art, music, and fiction, with a glance at historiography, he situates the study of the classics in the political, social, intellectual, and religious currents of the time, with often surprising results. Whether revisiting opera performances, art exhibitions, or popular cultural icons such as Ben Hur or The Last Days of Pompeii, as well as the uses to which they were put in the hallowed halls of academe and seats of political power, this book is certain to open new ways of understanding how we study and evaluate the manifold meanings of the past."—Froma Zeitlin, Princeton University

"The book is wonderfully written with lots of verve and lucidity, and it dives sensitively into a rich pool of archival material with a good deal of erudition."—James I. Porter, University of California, Irvine

"In this brilliant and wide-ranging book, Goldhill explores the cultural politics of classical reception from a broadly interdisciplinary perspective. He is a voracious reader with a wonderful eye for detail, moving across various literary genres and media—including music and the visual arts—to illuminate popular discourses and scholarly polemics surrounding classics in the nineteenth century. This is a dynamic engagement with Victorian ideas about classical antiquity, far from antiquarian in its appeal."—Yopie Prins, University of Michigan