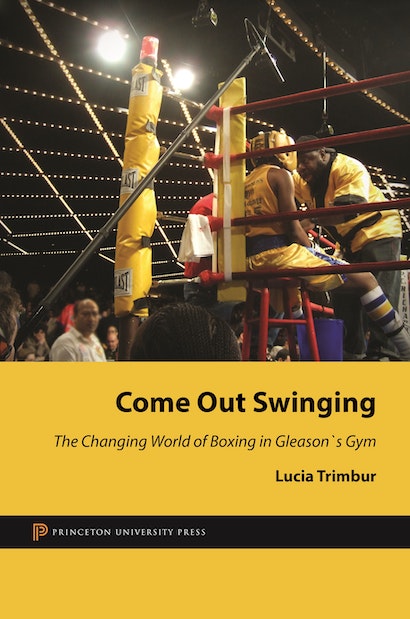 Gleason’s Gym is the last remaining institution of New York’s Golden Age of boxing. Jake LaMotta, Muhammad Ali, Hector Camacho, Mike Tyson—the alumni of Gleason’s are a roster of boxing greats. Founded in the Bronx in 1937, Gleason’s moved in the mid-1980s to what has since become one of New York’s wealthiest residential areas—Brooklyn’s DUMBO. Gleason’s has also transformed, opening its doors to new members, particularly women and white-collar men. Come Out Swinging is Lucia Trimbur’s nuanced insider’s account of a place that was once the domain of poor and working-class men of color but is now shared by rich and poor, male and female, black and white, and young and old.

Come Out Swinging chronicles the everyday world of the gym. Its diverse members train, fight, talk, and socialize together. We meet amateurs for whom boxing is a full-time, unpaid job. We get to know the trainers who act as their father figures and mentors. We are introduced to women who empower themselves physically and mentally. And we encounter the male urban professionals who pay handsomely to learn to box, and to access a form of masculinity missing from their office-bound lives. Ultimately, Come Out Swinging reveals how Gleason’s meets the needs of a variety of people who, despite their differences, are connected through discipline and sport.

Lucia Trimbur is assistant professor of sociology at the City University of New York's John Jay College of Criminal Justice and at the CUNY Graduate Center.

"This is rich and fascinating book. . . . Lucid and refreshingly free of unessential academic jargon, this is a book that should be read by any anthropologist, historian or sociologist seeking to understand the changing world of sport and leisure since the 1980s. Most importantly, it is a book is written with great humanity."—Tony Collins, Sport in History

"Trimbur has written a wonderful book about the world of boxing, specifically that place and space dedicated to boxing known as Gleason's Gym. Anyone who wants to understand boxing as practiced in 21st-century Brooklyn should read the sociological gift bestowed upon us called Come Out Swinging."—Joseph Trumino, American Journal of Sociology

"A brilliant, humane, and critically attentive book."—Les Back, Goldsmiths, University of London

"What is work? Trimbur's exquisite ethnography reveals postindustrial New York as a socially and spatially segregated landscape shaped by disappearing jobs for—and relentless criminalization of—modestly educated people of color. By developing their bodies as worksites and instruments, the boxers Trimbur describes enact complex understandings of the contradictory struggles to remix their labor with the external world. These sobering insights give me hope."—Ruth Wilson Gilmore, author of Golden Gulag: Prisons, Surplus, Crisis, and Opposition in Globalizing California

"This book is a gem. Incisive, deeply principled, and acutely observed, it yields nothing to the idea that Gleason's Gym should be seen as an exotic place. The product of extensive fieldwork, Trimbur's writing overflows with insights into work, sport, masculinity, and above all 'the realization of the colonial model within the metropolitan heartland.'"—Paul Gilroy, author of The Black Atlantic

"Come Out Swinging is an extraordinary work of ethnography and theoretical reflection in the tradition of DuBois's understanding of double consciousness, Sartre's realization of 'the fight,' and Fanon's insights about the transformative force of engaged practice. The first emerges from Lucia Trimbur's double training in sociology and African American studies, which she brings together with unusual grace and skill as she draws out the contradictions of a society premised on narcissistic models of power in which those who rule dictate conditions over the very bodies of the dominated. The social reach of the white female and male amateur boxers who live out their fantasies of physical strength to match their political and social location illustrates and echoes American power relations in ways that strain traditional clichés about the intersections of class, gender, race, and sexuality. Trimbur's provocative, poignant, and often brilliant reflections enable the reader to see beyond what is at first seen. The unexpected, constantly transformative dimensions of human relations are brought to the fore in a genuine portrait of what it means to bring the human element, wrought with contradictions, to the study of a social world paradoxically based on brutal compassion. This is a must-read for scholars and general readers interested not only in the complexity of sports in postindustrial society but also in what it means to fight for one's humanity under rapidly changing conditions of identity and meaning."—Lewis R. Gordon, University of Connecticut and Rhodes University, South Africa

"Read this book for old times and new times. You will learn about the bodily disciplines and human practices, some surprisingly intimate, of boxing culture, but also about how a working-class sanctuary of racialized masculinity, the boxing gym, has been engulfed by postindustrial social and economic relations. A book about boxing and the perplexing inequalities and cultural inversions of the late-modern age, Come Out Swinging powerfully shows the unique ability of ethnography to shed light on and connect the macro and the micro."—Paul E. Willis, author of Learning to Labor

"In this rich and engaging book, Lucia Trimbur invites her readers into the everyday world of Gleason's Gym. With its beautifully rendered observations and conversations, along with its lively style, this is a terrific book that does a marvelous job of revealing the complexities of the postindustrial landscape."—David Grazian, author of Blue Chicago: The Search for Authenticity in Urban Blues Clubs