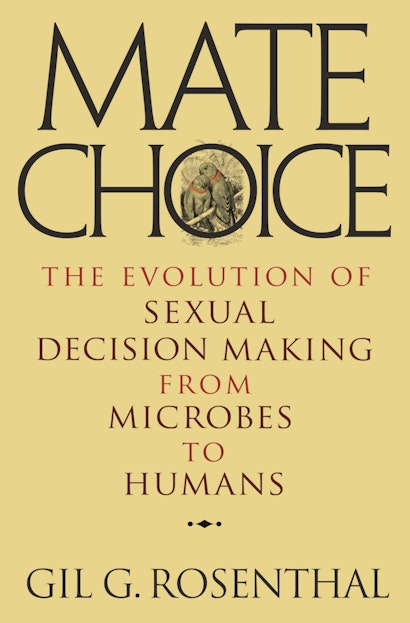 The popular consensus on mate choice has long been that females select mates likely to pass good genes to offspring. In Mate Choice, Gil Rosenthal overturns much of this conventional wisdom. Providing the first synthesis of the topic in more than three decades, and drawing from a wide range of fields, including animal behavior, evolutionary biology, social psychology, neuroscience, and economics, Rosenthal argues that “good genes” play a relatively minor role in shaping mate choice decisions and demonstrates how mate choice is influenced by genetic factors, environmental effects, and social interactions.

Looking at diverse organisms, from protozoans to humans, Rosenthal explores how factors beyond the hunt for good genes combine to produce an endless array of preferences among species and individuals. He explains how mating decisions originate from structural constraints on perception and from nonsexual functions, and how single organisms benefit or lose from their choices. Both the origin of species and their fusion through hybridization are strongly influenced by direct selection on preferences in sexual and nonsexual contexts. Rosenthal broadens the traditional scope of mate choice research to encompass not just animal behavior and behavioral ecology but also neurobiology, the social sciences, and other areas.

Focusing on mate choice mechanisms, rather than the traits they target, Mate Choice offers a groundbreaking perspective on the proximate and ultimate forces determining the evolutionary fate of species and populations.

Gil G. Rosenthal is professor of biology and of ecology and evolutionary biology at Texas A&M University. He is codirector of the CICHAZ field station in central Mexico.

"Mate Choice represents an ambitious synthesis of our current understanding of sexual selection in a broad range of life forms. . . . The book provides a clear synthesis of the state of affairs in the study of mate choice and related fields."—Science

"Rosenthal does an admirable job refocusing decades of work mostly concerned with the effects of (primarily female) mate choice on (primarily male) behavior, physiology, and morphology."—David A. Gray, Quarterly Review of Biology

"This book is a marvelously insightful, thought-provoking, and stimulating synthesis of mate choice. Drawing on information from the fields of animal behavior, ecology, evolutionary genetics, and sensory physiology, it will be a source of information and inspiration for everyone interested in this fascinatingly complex topic."—Rosemary Grant, coauthor of 40 Years of Evolution: Darwin's Finches on Daphne Major Island

"This book takes an interesting and substantial look at mate choice and will become a new reference on the topic. With its exhaustive references, broad taxonomic coverage, and fresh direction, this important work is a major, significant contribution to the field."—Richard O. Prum, Yale University

"Taking on the enormous field of mate choice, Gil Rosenthal reviews and curates research from neurobiology and endocrinology through psychology and evolutionary genetics to produce a towering work. An indispensable resource for students of animal behavior and evolution, this comprehensive and thoughtful book will anchor the study of mate choice for decades to come."—Robert Brooks, University of New South Wales, Australia