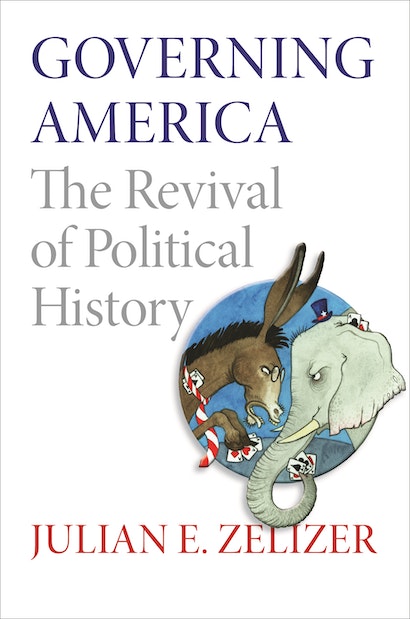 In recent years, the study of American political history has experienced a remarkable renaissance. After decades during which the subject fell out of fashion and disappeared from public view, it has returned to prominence as the study of American history has shifted its focus back to politics broadly defined. In this book, one of the leaders of the resurgence in American political history, Julian Zelizer, assesses its revival and demonstrates how this work not only illuminates the past but also helps us better understand American politics today.

Julian E. Zelizer is professor of history and public affairs at Princeton University. His most recent books include Jimmy Carter, Arsenal of Democracy, and The Presidency of George W. Bush (Princeton). He writes a weekly column for CNN.com and Politico and has written for the New York Times, the Washington Post, and many other publications.

"Zelizer's essays give the reader a good grasp of the ways that politics has unfolded over the past half century. And the range of topics gives a good sense of where the field lies at this point. The scholarship is impeccable, the sources appropriate, and the tone scholarly without being pedantic. As this collection of Zelizer's finest work indicates, the discipline of history still has room for political history."—John H. Barnhill, Canadian Journal of History

"This exhilarating volume deserves a broad readership. It is first and foremost invaluable to graduate students and historians exploring new approaches to American political history. Secondly, it reveals to political scientists the worth of political history, beyond furnishing the raw data for political analysis. Thirdly, it suggests ways in which public historians and policymakers might collaborate in policymaking. Finally, the essays are accessible enough to appeal to the general reader interested in the historical development of modern American politics. Above all, Zelizer's work exemplifies and validates historians' rediscovery of the importance of American politics, albeit more broadly defined than before, as well as vindicates political scientists' recent and continued interest in American history."—Eleanor Thompson, LSE Politics and Policy blog

"Governing America: The Revival of Political History is an important instrument to any person hoping to gain a better understanding of the revaluation of political history and the negotiation of the current political landscape of the United States. Both the lay reader and a student of political history would benefit by adding Zelizer's latest to his or her collection."—Chris Dawe, Journal of American Studies of Turkey

"This exhilarating volume deserves a broad readership. . . . Zelizer’s work exemplifies and validates historians’ rediscovery of the importance of American politics, albeit more broadly defined than before, as well as vindicates political scientists’ recent and continued interest in American history."—Eleanor Thompson, San Francisco Review of Books

"Governing America offers us an opportunity to observe one of the country's best political historians working at the top of his game. Zelizer's range is extraordinary, and he brings a penetrating intelligence to every topic he touches. No scholar working today has a better grasp of how the key institutions of American democracy, notably the Congress and the Presidency, have evolved over time, and how they have translated political demands emanating from society into state policy. A tour de force."—Gary Gerstle, Vanderbilt University

"Presidential power, congressional committees, national security—such are the daily bread of American political life but not the usual preoccupations of historians. Julian Zelizer has built a stunning career around probing how political institutions and policies have mattered historically. These fine essays show him singlehandedly breathing new life into political history."—Lizabeth Cohen, author of A Consumers' Republic: The Politics of Mass Consumption in Postwar America

"Julian Zelizer is not only the most prolific historian of modern American politics, but he is also the most authoritative and nuanced student of modern American state and society. To have the fruits of his work about taxation, the welfare state, Congress, and the national security state assembled in one place makes for an excellent collection. This is a consistently stimulating and wise book, and it should be required reading for any student of the New Deal, the Great Society, or modern American conservatism."—Tony Badger, University of Cambridge

"Julian Zelizer is a highly accomplished historian of twentieth—century American politics who has played a leading role in the recent revival of political history. These strong, accessible, and thoroughly grounded essays address important questions of broad scholarly and general interest. This is a collection that illustrates how exciting, intellectually diverse, and relevant political history has become."—Alice O'Connor, University of California, Santa Barbara