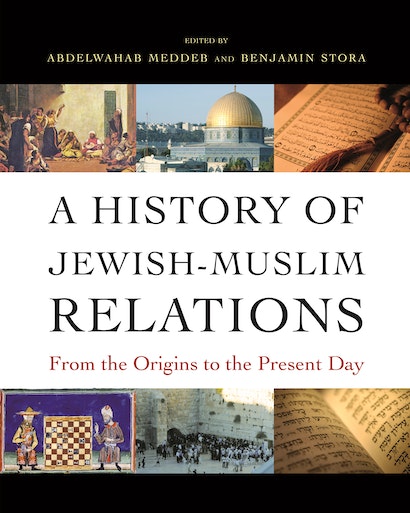 This is the first encyclopedic guide to the history of relations between Jews and Muslims around the world from the birth of Islam to today. Richly illustrated and beautifully produced, the book features more than 150 authoritative and accessible articles by an international team of leading experts in history, politics, literature, anthropology, and philosophy. Organized thematically and chronologically, this indispensable reference provides critical facts and balanced context for greater historical understanding and a more informed dialogue between Jews and Muslims.

Part I covers the medieval period; Part II, the early modern period through the nineteenth century, in the Ottoman Empire, Africa, Asia, and Europe; Part III, the twentieth century, including the exile of Jews from the Muslim world, Jews and Muslims in Israel, and Jewish-Muslim politics; and Part IV, intersections between Jewish and Muslim origins, philosophy, scholarship, art, ritual, and beliefs. The main articles address major topics such as the Jews of Arabia at the origin of Islam; special profiles cover important individuals and places; and excerpts from primary sources provide contemporary views on historical events.

Abdelwahab Meddeb is professor of comparative literature at the University of Paris-X (Nanterre). His books include Islam and Its Discontents. Benjamin Stora is University Professor at the University of Paris-XIII (Villetaneuse), where he teaches the history of nineteenth- and twentieth-century North Africa and the history of North African immigrants in Europe. His many books include Algeria, 1830-2000: A Short History.

"Although contemporary media may portray Muslim-Jewish relations from only the perspective of the Palestinian-Israeli lens, and view Muslims and Jews as monolithic, this book presents a far deeper and richer relationship between Muslims and Jews in areas that go beyond politics and religion. . . . The essays presented here provide the general reader with a flavor of the rich Muslim-Jewish relationship since early Islam. An excellent reference for high-school students, general readers looking for more depth than current media coverage, and undergraduates looking for a starting point in their research."—Booklist

"At more than 1,000 pages of text, illustration and scholarly apparatus, A History of Jewish-Muslim Relations is, quite literally, a solid work of scholarship. Thanks to its eye-catching visual elements, it also presents itself as a coffee-table book of a superior kind. Above all, it is a serious and timely effort to repair a relationship between kindred peoples who have never been fully at ease with each and yet, thanks to the accidents of history, are fated to live in close proximity."—Jonathan Kirsch, Jewish Journal

"This work marks a milestone. . . . It is a true act of faith in the ability of history, and, more broadly, the social sciences, to mediate between past and present and between extremes."—Frédéric Abécassis, Lectures

"[T]he work contains a wealth of information that will appeal to varied constituencies. It certainly deserves a place on the bookshelf of any individual or institution concerned with this contentious subject."—Philip Chrimes, International Affairs

"[T]his is a very beautiful book. It is also a very important and timely one. . . . I highly recommend this book to everyone who is interested in Jewish-Muslim relations. I can easily imagine using it as the principal textbook for a college course on the subject, and I am sure that others will do just that."—Michael McGaha, Middle East Media and Book Reviews Online

"The chapters are concise and accessible, adequately referenced, and stunningly illustrated. . . . It will be indispensable for scholars and teachers seeking perspective or planning courses or research."—Choice

"This collection of scholarly yet accessible articles by dozens of Jewish and Muslim experts is the definitive source for understanding a complex relationship between Muslims and Jews from the seventh century to the present day. . . . [T]he richness of this fantastic and exciting book lies also in its descriptions of how Jews and Muslims have learned from each other in the arenas of philosophy, science, art, literature, and mysticism."—Tikkun

"A History of Jewish-Muslim Relations is an essential book for anyone who seeks truly to understand the history and context of modern relationships between the two descendants of Abraham."—Charles H Middleburgh, Charles Middleburgh Blog

"A History of Jewish-Muslim Relations, is a resource that should be in the library of every person who cares about peace in the Middle East and reconciliation among Judaism, Christianity, and Islam."—Joseph V. Montville, Abrahamic Family Reunion

"I found the book fascinating. I learned a great deal from it—about the culture of these two groups, about their conflicts, about the areas where they have some commonality. The level of research is quite deep. The inclusion of art and items from the writings of each tradition simply add to the richness of the volume."—Mary Jarvis, Reference Reviews