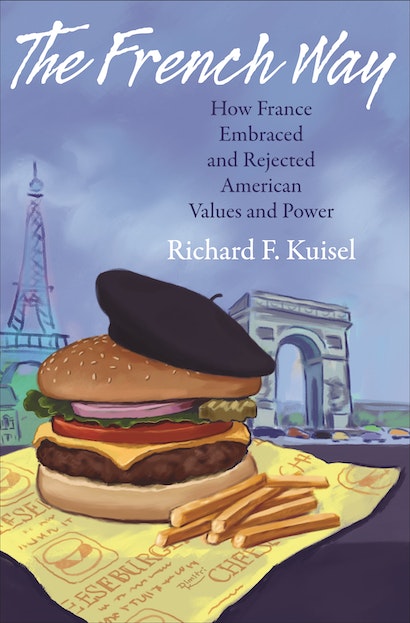 There are over 1,000 McDonald’s on French soil. Two Disney theme parks have opened near Paris in the last two decades. And American-inspired vocabulary such as “le weekend” has been absorbed into the French language. But as former French president Jacques Chirac put it: “The U.S. finds France unbearably pretentious. And we find the U.S. unbearably hegemonic.” Are the French fascinated or threatened by America? They Americanize yet are notorious for expressions of anti-Americanism. From McDonald’s and Coca-Cola to free markets and foreign policy, this book looks closely at the conflicts and contradictions of France’s relationship to American politics and culture. Richard Kuisel shows how the French have used America as both yardstick and foil to measure their own distinct national identity. They ask: how can we be modern like the Americans without becoming like them?

France has charted its own path: it has welcomed America’s products but rejected American policies; assailed America’s “jungle capitalism” while liberalizing its own economy; attacked “Reaganomics’ ” while defending French social security; and protected French cinema, television, food, and language even while ingesting American pop culture. Kuisel examines France’s role as an independent ally of the United States—in the reunification of Germany and in military involvement in the Persian Gulf and Bosnia—but he also considers the country’s failures in influencing the Reagan, Bush, and Clinton administrations. Whether investigating France’s successful information technology sector or its spurning of American expertise during the AIDS epidemic, Kuisel asks if this insistence on a French way represents a growing distance between Europe and the United States or a reaction to American globalization.

Richard F. Kuisel holds a joint appointment at the BMW Center for German and European Studies and in the History Department at Georgetown University. His books include Seducing the French: The Dilemma of Americanization

"[R]equired reading for anyone interested in relations between the world's two oldest republics."—Andrew Moravcsik, Foreign Affairs

"[D]emonstrates with chilling clarity the pattern of US hegemony."—David Hanley, Times Higher Education

"In this erudite study examining Franco-American relationships in the 1980s-90s on foreign policy, economics, and popular culture, Kuisel shows that US domestic and foreign policies were a deterrent to France's national identity."—Choice

"Richard Kuisel does a masterful job of highlighting and trying to make sense of numerous paradoxes surrounding the unique and complex French fears about Americanization at the turn of the millennium."—Sophie Meunier, H-Diplo Roundtable Reviews

"[E]ven the most traditional practitioners of U.S. diplomatic history, and likewise U.S. foreign-policy makers, will have much to learn from this revealing and masterful account of the French 'ways.'"—Alessandro Brogi, H-Diplo Roundtable Reviews

"[T]his is a marvelous book, a work of imaginative and sustained scholarship, bold and far-reaching in its scope, shrewd and incisive in its interpretation, a book in which the heady accumulation of detail in no way interferes with the elaboration of a clear big picture. One might question some aspects of certain conclusions, but there is no getting away from the fact that Kuisel is the absolute master of his subject. This is a book which will become a reference for scholars of France for generations to come."—Jolyon Howorth, H-Diplo Roundtable Reviews

"Kuisel offers a highly engaging and meticulously documented analysis. . . . Kuisel is . . . very persuasive in elucidating why the USA serves as an indispensable foil for France."—Gino Raymond, French Studies

"In a fitting sequel to his classic Seducing the French, Richard Kuisel offers a wide ranging and thought-provoking look at the final two decades of a century-long 'asymmetrical rivalry' between France and the United States. His portrait of the eighties and nineties—focusing especially on diplomatic, economic, and cultural conflicts—raises important questions about how scholars conceptualize anti-Americanism and its impact on policy making."—Richard Langer, Diplomatic History

"Kuisel's superbly researched analysis adds depth and texture to big and small instances of French impatience with the unquestioned—and unquestioning might of the world's only remaining superpower at the close of the last century. American travelers will meet the book with knowing smiles, no doubt, while academics will be grateful for gaining perspective on the occasional grilling inflicted by French colleagues."—Doina Pasca Harsanyi, Historian

"[F]uture historians . . . will be indebted to Kuisel for this readable yet detailed analysis of French views on American politics, economics, and popular culture in the late twentieth century. . . . [H]is long and meticulously researched work . . . will become, as are his other works, a must-read for historians of society, culture, and diplomacy in the late twentieth-century."—Rebecca Pulju, H-France Forum

"The French Way as a very important contribution. . . . Kuisel offers a rich, even colorful, narrative of political history, international relations . . . business and, to some extent cultural, history. That is no small feat. . . . Kuisel deserves much praise for taking on a topic and an era that most of the rest of us, slipping back and forth between history and memory, experienced and therefore feel all too qualified to assess."—Stephen L. Harp, H-France Forum

"Richard Kuisel clearly belongs to the most prominent American authors who are responsible for our current state of historical knowledge. . . . Kuisel's book, which is conceptually challenging, methodologically sound, and empirically reliable, has much to offer."—Helke Rausch, H-France Forum

"Richard Kuisel once again blazes a clear path through the thickets of emotion and invective that tangle French-American relations. Why, he asks, did good relations in the 1980s worsen in the 1990s under Chirac-Clinton? Examining the United States' emergence from the Cold War as an assertive hyperpower and the French government's opposition to American companies and policies, Kuisel presents a balanced view of French-American relations in which neither side is entirely blameless."—Robert O. Paxton, Mellon Professor Emeritus of Social Science, Columbia University

"Richard Kuisel has spent a lifetime explaining 'the French way' with superb scholarship, style, and compelling humor. This is the culmination of his work: an outstanding and deeply felt contribution to our comprehension of America's complex relations with one of our most demanding, yet least dispensable allies."—Simon Serfaty, Old Dominion University

"With elegant and sleek prose, Kuisel tells the forgotten history of France's perceptions of the United States in the 1980s and 1990s. He vividly paints the portrait of a France actively seeking to adopt American culture and techniques, while at the same time trying to adapt, resist, and compete with the overpowering ally. A pleasure to read."—Sophie Meunier, Princeton University

"No one knows better the ins and outs of Franco-American relations in the twentieth century than Kuisel. In this terrific and persuasive book, he analyzes a broad range of materials—public opinion polls, intellectual argument, business practices, and foreign-policy debate—handling them all with lucidity, a fine sense of nuance, and scrupulous good judgment."—Philip Nord, author of France's New Deal