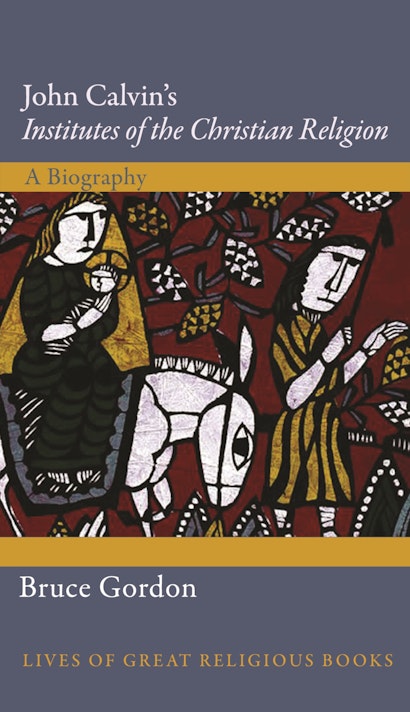 John Calvin’s Institutes of the Christian Religion is a defining book of the Reformation and a pillar of Protestant theology. First published in Latin in 1536 and in Calvin’s native French in 1541, the Institutes argues for the majesty of God and for justification by faith alone. The book decisively shaped Calvinism as a major religious and intellectual force in Europe and throughout the world. Here, Bruce Gordon provides an essential biography of Calvin’s influential and enduring theological masterpiece, tracing the diverse ways it has been read and interpreted from Calvin’s time to today.

Gordon explores the origins and character of the Institutes, looking closely at its theological and historical roots, and explaining how it evolved through numerous editions to become a complete summary of Reformation doctrine. He shows how the development of the book reflected the evolving thought of Calvin, who instilled in the work a restlessness that reflected his understanding of the Christian life as a journey to God. Following Calvin’s death in 1564, the Institutes continued to be reprinted, reedited, and reworked through the centuries. Gordon describes how it has been used in radically different ways, such as in South Africa, where it was invoked both to defend and attack the horror of apartheid. He examines its vexed relationship with the historical Calvin—a figure both revered and despised—and charts its robust and contentious reception history, taking readers from the Puritans and Voltaire to YouTube, the novels of Marilynne Robinson, and to China and Africa, where the Institutes continues to find new audiences today.

Bruce Gordon is the Titus Street Professor of Ecclesiastical History at Yale Divinity School. He is the author of Calvin and The Swiss Reformation. He lives in New Haven, Connecticut.

"Bruce Gordon provides an essential biography of Calvin's influential and enduring theological masterpiece, tracing the diverse ways it has been read and interpreted from Calvin's time to today."—Worcester Telegram

"This is an excellent volume. I warmly commend it to anyone with an interest in Calvin's Institutes, and the way it has been understood through the centuries."—Tony Lane, Gospel Coalition

"While Gordon's book will contribute to scholarship on the Reformation in general, and Calvin and the Reformed tradition in particular, it will be particularly beneficial to students and non-specialists who are interested in Calvin but have never read his opus magnum in its entirety. Gordon's biography of the Institutes is a welcome addition to the scholarship and I highly recommend it."—Inseo Song, Reading Religion

"Bruce Gordon's short book is worth reading. . . . As an introduction to the complex legacy of one of the magisterial Reformers, Gordon's book is an excellent place to begin."—Judith Maltby, Church Times

"While there have been scores of studies tracking the legacy of John Calvin and his theological vision in the history of Christianity and the western world, this new study of the Rezeptionsgeschichte of Calvin's magnum opus, The Institutes of the Christian Religion, is unique. Gordon . . . ably shows that this work well deserves a place in a series devoted to the ‘Lives of Great Religious Books.'"—Michael A.G. Haykin, Church History and Religious Culture

"[A] compact treatment of the life of one of the great theological texts, John Calvin's Institutes of the Christian Religion. . . . Due to the broad intellectual history it develops, this book would work quite well in the classroom as a secondary source on Calvin and Reformed theology for upper-level undergraduates and seminary students. It could also be recommended as a primer on these topics for interested nonspecialists."—Tanner Capps, Renaissance Quarterly

"Gordon's book is an invaluable introduction to Calvin and the Institutes, and to the diversity of interpretation surrounding it."—John L. Thompson, Fuller Theological Seminary

"Bruce Gordon's biography of Calvin's book is well researched, energetically presented, and broadly informative. Gordon ably situates the Institutes against its author and the complicated history of Calvinism."—Mark A. Noll, author of Protestantism: A Very Short Introduction