A concise and accessible introduction to the classic Buddhist text 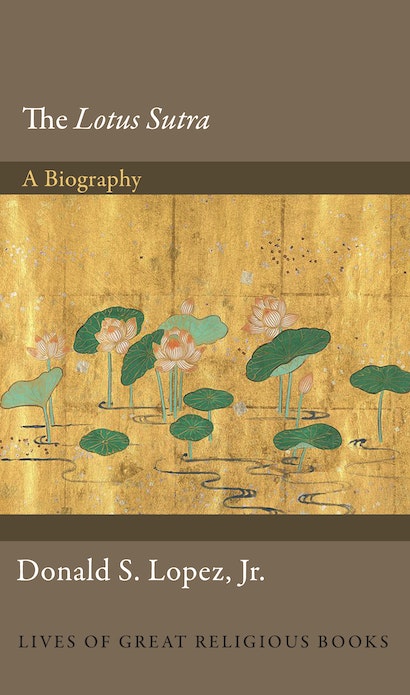 The Lotus Sutra is arguably the most famous of all Buddhist scriptures. Composed in India in the first centuries of the Common Era, it is renowned for its inspiring message that all beings are destined for supreme enlightenment. Here, Donald Lopez provides an engaging and accessible biography of this enduring classic.

Lopez traces the many roles the Lotus Sutra has played in its travels through Asia, Europe, and across the seas to America. The story begins in India, where it was one of the early Mahayana sutras, which sought to redefine the Buddhist path. In the centuries that followed, the text would have a profound influence in China and Japan, and would go on to play a central role in the European discovery of Buddhism. It was the first Buddhist sutra to be translated from Sanskrit into a Western language—into French in 1844 by the eminent scholar Eugène Burnouf. That same year, portions of the Lotus Sutra appeared in English in The Dial, the journal of New England’s Transcendentalists. Lopez provides a balanced account of the many controversies surrounding the text and its teachings, and describes how the book has helped to shape the popular image of the Buddha today. He explores how it was read by major literary figures such as Henry David Thoreau and Gustave Flaubert, and how it was used to justify self-immolation in China and political extremism in Japan.

Concise and authoritative, this is the essential introduction to the life and afterlife of a timeless masterpiece.

Donald S. Lopez, Jr. is the Arthur E. Link Distinguished University Professor of Buddhist and Tibetan Studies at the University of Michigan. His many books include The Princeton Dictionary of Buddhism (with Robert E. Buswell, Jr.) and The Tibetan Book of the Dead: A Biography (Princeton). He lives in Ann Arbor, Michigan.

"In the raft of entertaining characters found in the [Lotus Sutra] itself . . . Lopez's book adds a cast of historical figures across two millennia united only by their passion for the book. . . . Lopez's book shows us that translators are the unsung heroes of religious, as much as literary, history."—Chandrahas Choudhury, Wall Street Journal

"With scholarly acumen, contextual nuance, and adaptive storytelling, he deftly traces the historical trajectory of the Lotus Sutra by examining various people, places, and political contexts that influenced the transmission of the text. . . . A great pedagogical tool, Lopez's book is also an enjoyable read for anyone interested in Buddhism and Eastern religion, or the global reach of a single sacred text."—Publishers Weekly

"In The Lotus Sutra: A Biography, Donald Lopez promises to trace the various roles of the Lotus Sutra as it has traversed the globe - and he delivers."—Paul Swanson, Buddhadharma

"Thanks to Professor Lopez and his book I finally feel I have a sense of the sutra within the Lotus Sutra. I highly recommend it to anyone interested in Buddhism beyond the simple introductions."—James Ford, Patheos

"This is a small book, but with great weight, and with a significance far beyond its diminutive physical size. Donald Lopez has a gift for writing concisely and lucidly, making this volume a welcome addition to the 'Lives of Great Religious Books' series. . . . This volume has moved to the top of my list of books to recommend to people who want a clear and objective introduction to the Lotus Sutra."—Paul L. Swanson, Japanese Journal of Religious Studies

"This engaging yet sobering study tells the picaresque tale of a most curious text that continues to fire the devotional imagination of millions of Buddhists worldwide. Recounted with scholarly rigor and postmodern irony, this biography reveals how the story of a book can be just as intriguing, quirky, and unpredictable as that of any living, breathing person."—Stephen Batchelor, author of After Buddhism

"The Lotus Sutra is both a key scripture of Indian Mahayana Buddhism as well as a mainstay of the forms of Buddhism that emerged in China, Korea, and Japan. But despite numerous translations into English, this text remains poorly appreciated and understood in the West. With his usual literary aplomb and vast erudition, Lopez has written an invaluable and eminently readable introduction to this demanding work. His lucid exposition of the history, transmission, reception, and significance of this justly famous scripture will be appreciated by anyone interested in Buddhism's sophisticated literary legacy."—Robert Sharf, University of California, Berkeley

"Highly recommended. In Lopez's easy-to-read biography of the Lotus Sutra, readers will find an informative and provocative account of the many lives of this influential scripture. It not only introduces the key themes in the history of Buddhism, but also provides an invaluable overview of the development of Buddhist studies in the West."—William M. Bodiford, University of California, Los Angeles

"In this lively and engaging book, Lopez presents a concise account of the Lotus Sutra and the high points in its history of reception in China, Japan, and the modern West. Even for seasoned Lotus specialists, there are some wonderful surprises here."—Jacqueline I. Stone, Princeton University

"Such a well-written, smart, and engaging treatment of the Lotus Sutra could have only been written by a scholar with the type of expansive vision of the Buddhist tradition that Lopez commands. Lopez provides insight into the sutra's challenging doctrines, describes the controversies it sparked, and tells a compelling story about its role in the early days of Western engagement with Buddhism. This book will be enjoyed by general readers, although specialists will also come away from it with fresh new perspectives on this Buddhist classic."—James Robson, Harvard University